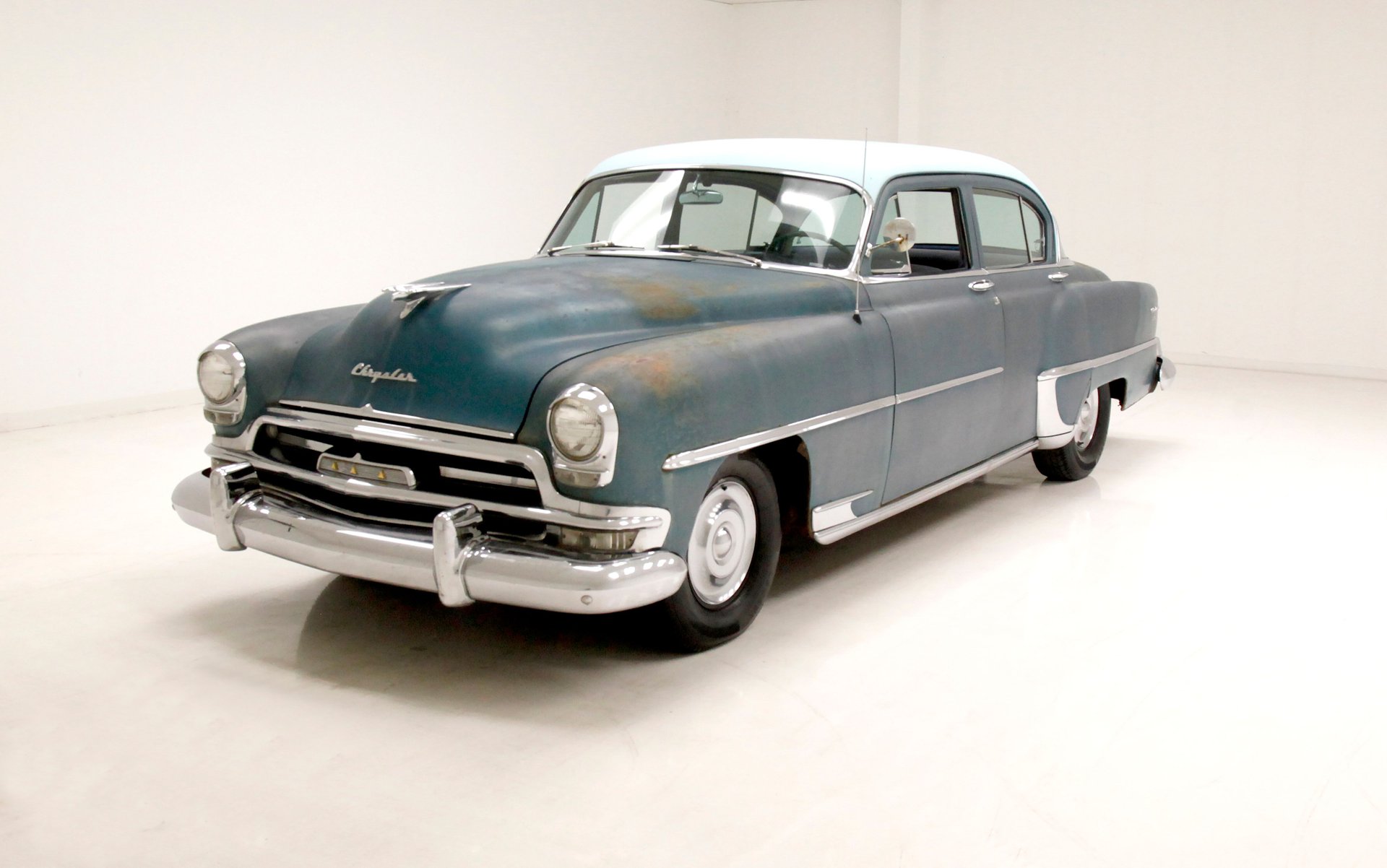 Our current consignor purchased this car from a dealer in 2018. This 1954 Windsor comes to us with nice chrome trimmings and plenty of them, and worn patina paint. A few cosmetic issues can be found in the interior, but a nice overall BIG car for the collection or someone who wants to tinker around with the cosmetics, all the while retaining the ability to drive around and show off.

Exterior
Big chrome adorns this car on every corner, and it's all looking just fine and with a shine. A large thick lower front bumper leads the way and just above a wraparound thick chrome trimming encircles the grille opening. The upper trim dips down to allow for the single head lighting with lower turn signals to top the front of each quarter panel. Just forward of the wheel well in front, a thick trim spear begins its journey to the end of the front doors. Below just behind the wheel well are chromed winglike adornments which have a stainless rocker covering below. This wraps the bottom of the car and leads us to the rear quarter which has a nifty smooth bump out for the rear tires and wheels. Another winglike trimming wraps the front of the quarter curve and has another short term seat coming off the top and wrapping around the rear tail lighting. A large tall rounded bulbous hood with a chromed jet hood ornament is up front, and leads our eye back to the front glass which is also trimmed in bling! A sporty C pillar is on back and has a forward raking angle to it which frees a curved rear glass on back. The top of this car is light blue, and the remainder of the steel behind all this chrome is a dulled patina mix of various blues, worn off paint, scratches and some dents, (in the trim too), and some surface rust in the really worn off areas. On the back is a large rounded trunk lid, with a big chrome bumper framing the bottom. Vertical split taillights with a central round white backup light are on the rounded “fins” of the rear quarters to each side of the trunk. Shiny polished wheel coverings are wrapped by black wall tires on all 4 corners.

Interior
Opening all the doors we see dark blue ribbed vinyl toppers and some fuzzy light blue broadcloth below and just a hint of more dark blue vinyl for the bottoms. Shiny trimmings delineate the panels on these doors. These present in various stages of disrepair with some having torn or non-existent armrests, others smudged light blue fuzzy panels and wrinkled loose vinyl bottoms. Inside the benches are dark blue vinyl for the seat tubs and top thirds of the seats. In the middle is a rectangular dimensional texture pattern light blue broadcloth. The rear bench has a similar motif, and both benches show some staining on the lighter blue broadcloth. The dash is painted in the matching dark blue for the instrument cluster surround. The cluster has a machined aluminum panel that houses 2 large round instruments, the turn signal indicators and some warning lights, with various turn knobs below the steering column which presents in the same dark blue color. The upper dash has a now faded to green ribbed padded panel. In front of the dash, is the green bakelite faded steering wheel and to its right is a horizontal shiny panel which houses the radio, temp sliders and mesh covered speakers just above the passenger glove box which is more dark blue painted metal. Faded blue carpeting floods the floors, and above is a faded mohair headliner with some water stains and small tears within its realm.

Drivetrain
Under the hood we see the gray 264ci Inline 6-cylinder mill which is topped with an oil bath air cleaner and a 1-barrel carburetor. Attached to the rear of the I-6 is a Powerflite 2-speed automatic. The rear axle weighs in at 3.90.

Undercarriage
Heavy surface rust covers most of the undercarriage panels and suspension. The rear and side inner rockers are rusted out, and floor pans have some chip off of the dirty rustproofing, but only have minor rust, just factory paint on these where it has worn off rustproofing. The frame is solid, but the rockers and those inner panels will eventually need some attention. Drum brakes present on all 4 corners.

Drive-Ability
This car does start right up and runs smoothly. Brakes are good for the drums, and handling is cumbersome due to it being a large metal car on coil sprung and leaf sprung suspension. Some electrical issues cropped up during the drive and those include the radio, horn, turn signals and gas gauge which were all inoperable. The gas gauge did come to life occasionally, but remained mostly inoperable.

Some TLC for this old gal, and throw in some elbow grease and minor wrenching, bodywork and interior cleaning and recovering, and you will have a wonderful big car example of living large Chrysler style ca. 1954.