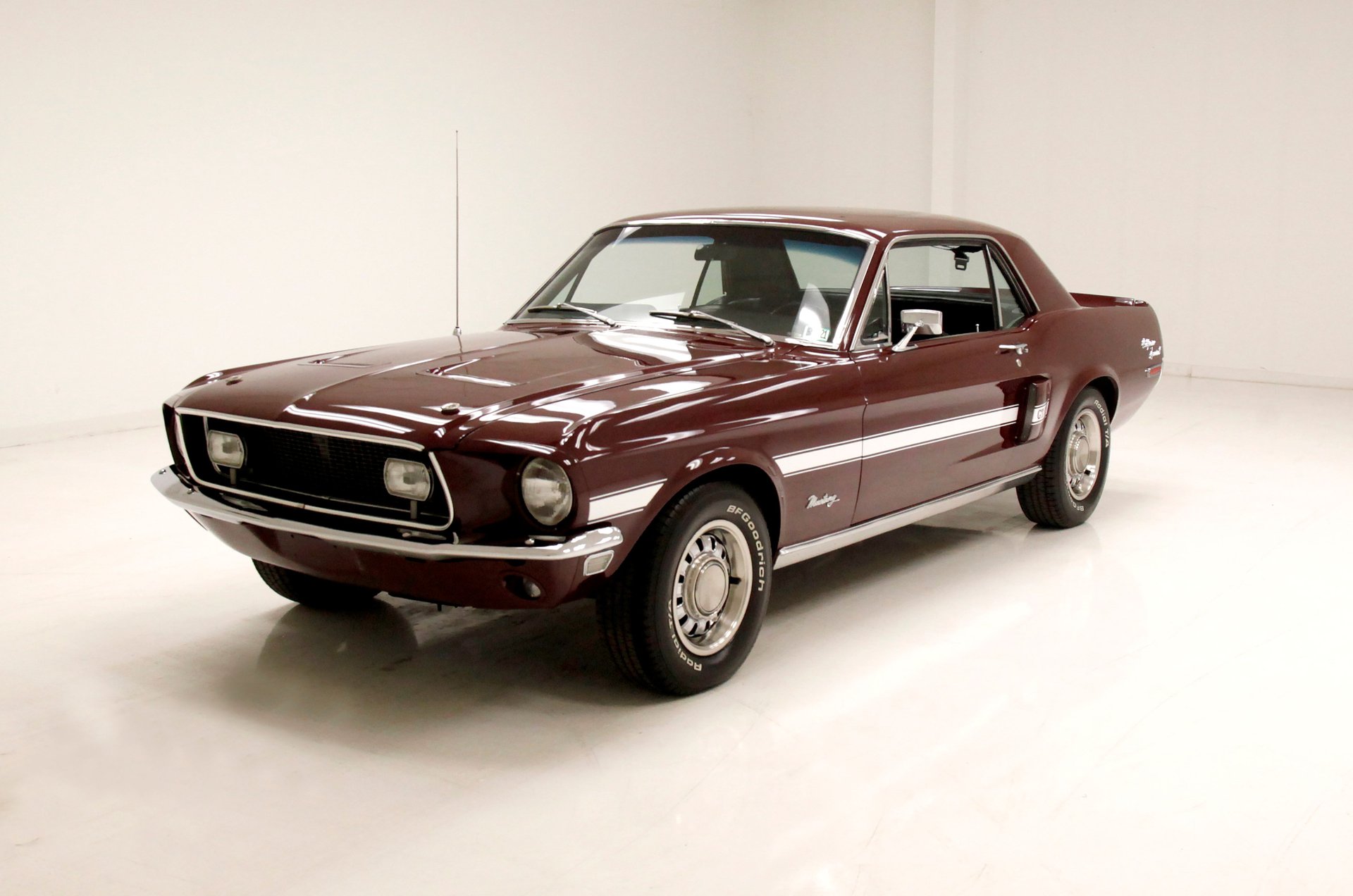 In mid-February 1968, the California Ford Dealers, (Ford Dealer Advertising Fund), began to market a factory-built, limited-edition Mustang, called the GT/CS, or "California Special". The hope was for a targeted production run of 5,000; however, only 4,118 were made, including 251 units that were remarketed in Denver, Colorado, as "High Country Special '68". Production ran for only 5.5 months from mid-February 1968 to early August 1968. Today, classic car collectors consider these cars to be very desirable.

“California made it happen!” was the marketing theme for this very special and rare edition we have here in our halls for consignment. This 1968 Mustang GT/CS is still in its original form but has had a full torn down to unibody and then rebuilt, resprayed and any rust was totally eradicated at this time (2016). Now with a rebuilt engine containing a mild cam and period-correct 4bbl intake, Holley carburetor, Pertronix electronic ignition, and dual exhaust. A true rare bird in the Mustang collection, or we could call it a horse of a different color?!

Exterior
CALIFORNIA SPECIAL FEATURES Priced at $194.31 and listed on the window sticker as the "GT/CS EQUIP PACKAGE," the California Special included the addition of a host of fiberglass parts that gives this model a very Shelby-like and aggressive look. A deck lid with integrated spoiler and quarter-panel extensions to match; non-functional body-side scoops; and a lower back panel. Standard Mustang tail lamps were ditched in favor of horizontal units from the '65 Thunderbird. If that back end looks familiar, it's probably because you've got a '68 Shelby Mustang convertible tail in your mind. The trunk and quarter-panel extensions were common to both models. Unlike the side scoops, the vented louvers in the hood are functional, at least in terms of allowing heat to escape. That hood was held down by DZUS-type hood locks. Also at the front of the car, that shiny horse in the center is now gone, and now the grill features a pair of rectangular fog lamps, first Marchal and later Lucas, a running change during production apparently related to California safety laws. Ford also installed an extra-large gas cap, similar to the ones used on the GT and Shelby models, but with just the running Mustang on it. Contrasting body stripes were part of the package. The triple stripes—thin lines on top and bottom of a much thicker stripe—start at the front fender and end at the quarter-panel scoops. These present in white and add a nice contrast to the Royal Maroon the rest of the straight steel is bathed in. The "GT/ CS" badging appears in body color as cutout, or negative lettering on the hockey stick cove scoops, like a stencil. Cursive-script "California Special" badges were cast in metal and screwed on each rear quarter panel, along with Mustang in the same script just above the passenger's taillight bar. 14-inch styled steel wheels are all wrapped in raised white BFG Radial T/A's.

Interior
This '68 Mustang GT/CS makes no bones about its sporty intentions. This base-model Mustang includes black vinyl-covered bucket seats. In front, a five-gauge instrument cluster is present and is within a black dash front field. The twin eyebrow style dash top is bald and padded and in great condition with no cracks. In the center a vertical panel lowers itself to the center console, and this is where the AM/FM radio resides. Just below a tamboured door raises and lowers to reveal a small storage area. This melts into the central console whirr the iconic T shift lever resides and continues to run past the buckets. A clean like new rear bench takes the same pattern as the front buckets, and all this floats in a sea of pristine black carpeting. Above is a black textured headliner which has a few wrinkles in the B pillar coverings. A shout out to the trunk where a beautiful textured liner is in and new patio sides along with a full same as the other 4 tires and wheels spare.

Drivetrain
No stones left unturned under the hood where a blue block and blue valve covered fully restored and detailed 289ci V8 resides. As previously noted, this has a mild cam installed, 4bbl intake and a newer Holley 4 BBL carburetor on top. Pertronix now provides the ignition, and this has a C4 3-speed automatic transmission using power rearward to a Ford 8-inch, 3.00 conventional rear axle. Just a beautiful job here under the hood.

Undercarriage
Looking much like it just rolled off the factory floor, we see maroon overspray in the floor pans. A light surface rust is on the rear leaf springs, and on panels near the rockers at the wheel wells. Independent coil springs and power disc brakes are reserved for the front, and power drums with leaf springs for the rear. A dual exhaust is snaking its way from front to back and ends in chrome tipped pipes on either side of the rear roll pan.

Drive-Ability
A quick starter and on the test track it came to life. Nice acceleration, solid braking and handling, and the transmission shifted smoothly. All functions were working as they should.

Mostly only marketed to the west of the Rockies states, this GT/CS Mustang has shades of the cobra with its own unique styling. Looking great on the restoration scale, a very nice rare example…California here we come! Although this nugget resides now in our east hall here at the unmatched Classic Auto Mall.