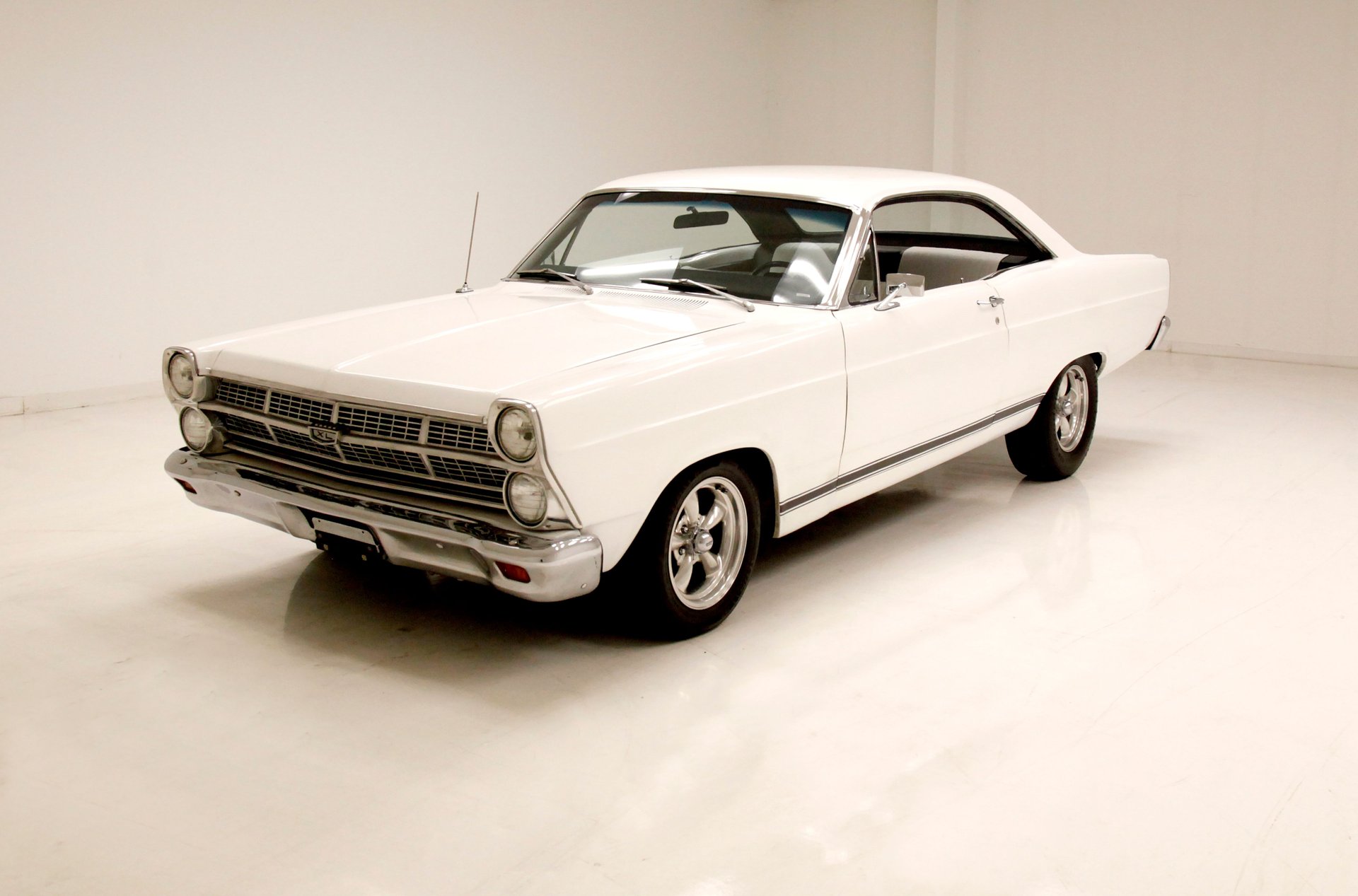 GM surprised the auto industry with the “supercar”, (later known as the muscle car), in much the same way Ford had shaken things up with the Mustang. Though Chrysler had introduced the Barracuda, which sold in distant numbers compared to the epochal Mustang, it took GM a couple of years to generate some worthwhile competition. Similarly, Pontiac's well-received GTO took even the other GM divisions by storm, and their own big-car engines weren't shoehorned into the intermediate bodies until 1965. Ford used the Fairlane platform to enter the mid-size performance game in 1966 by offering big block performance options and a newly restyled body that included a stunning two door hardtop with a sweeping rear roofline. This body style could be had as a GT or GTA (automatic) performance model, an XL sport/luxury model, or a 500 model which was more pedestrian. The Fairlane body styles, models, and many of the options were carried over and added to for 1967.

For consignment is this classic 1967 Ford Fairlane 500 two door hardtop (despite the grille badge that says “XL”). This particular classic has been in the capable hands of several dedicated owners who provided various upgrades to the car including a newer/larger/better performing engine, a color change from an off-white to a bright white, and custom upholstery. The latest owner and now consigner has maintained and enjoyed the car for several years however it is no longer getting much use. As a result, it is occupying space here in the halls of Classic Auto Mall.

Exterior
The “electric shaver” styled aluminum grille is flanked by stacked dual headlights that are canted forward giving an aggressive look. A bright chrome bumper completes the car's metallic 1960's face. The windshield is framed by bright stainless trim as well as the drip rails that outline the fastback-like roofline that continues to the rear of the car as two small fins that seem to disappear into the tops of the tail lights. The vast canted rear window is surprisingly curved for such an otherwise angular car. The rear view offers stacked square chrome beveled taillights on each side with another bright chrome bumper that hides the gas cap beneath its license plate and dual exhaust below. Fairlane 500 is properly indicated beneath the anodized aluminum trim that runs between the taillights. Bright white paint covers the steel panels, none of which none show any rust however some offering signs of previous repair. A black Fairlane GT-style stripe is painted on each side of the car just above the rocker panel. The wheels are aluminum 15-inch Torque Thrust II's. The rear tires are taller than those in front weighing in at 235/70R15's and 205/60R15's respectively.

Interior
A swing of either of the two doors reveals stock black vinyl door panels along with a vertical insert wood appliqué, shiny knobs and actuators, and a black armrest. Seating is a front split back bench and a full on rear bench, both sporting black bolsters and white inserts. Three seatbelts are in place for the front seat and three for the rear. The dash retains much of its originality with a black padded upper dash, metal lower dash in body color, along with the stock instrument panel, controls, and gauges. “Fairlane 500” lettering has been added, supposedly to remind you of what you are driving. The factory AM radio remains and small accessory gauges reside beneath the dash. The stock steering wheel retains its center crash safety pad that appears below the original column shifter. Black carpeting floods the floors and a slightly textured tweed pattern hangs above in the headliner.

Drivetrain
The original 289ci 2-barrel V8 was replaced with 302ci V8 that is fed by a single 4-barrel 600 CFM electric choke carburetor that sits atop a polished dual plane intake and which is accompanied by many chrome and polished aluminum components. There is a C4 3-speed automatic on back that pushes its power rearward to a Ford 8-inch 3.10 ratio axle.

Undercarriage
Showing in black straight steel some surface rust is noted but is all unremarkable as to structural quality and integrity of this car. An H pipe dual exhaust is on, as well as independent coil springs in front, and leaf springs for the back. Drum brakes are seen on all 4 corners underneath along with factory power steering. A prior owner had added sub-frame connectors, likely when the larger engine was installed.

Drive-Ability
A quick starter and nice driver for the cruise or to push the accelerator for some excitement. A good well-proportioned interior in its two-tone glory, original dash and only the reverse lights not illuminating it was a good experience with the test drive.

A fine practical example from 1967 with nice wheels and a beauty of an interior that has some of the appearance of the muscle car version rather than the “grocery getter” model. Well cared for over the years, and enjoyed immensely by the consigner in no small part by the work performed by those who came before.