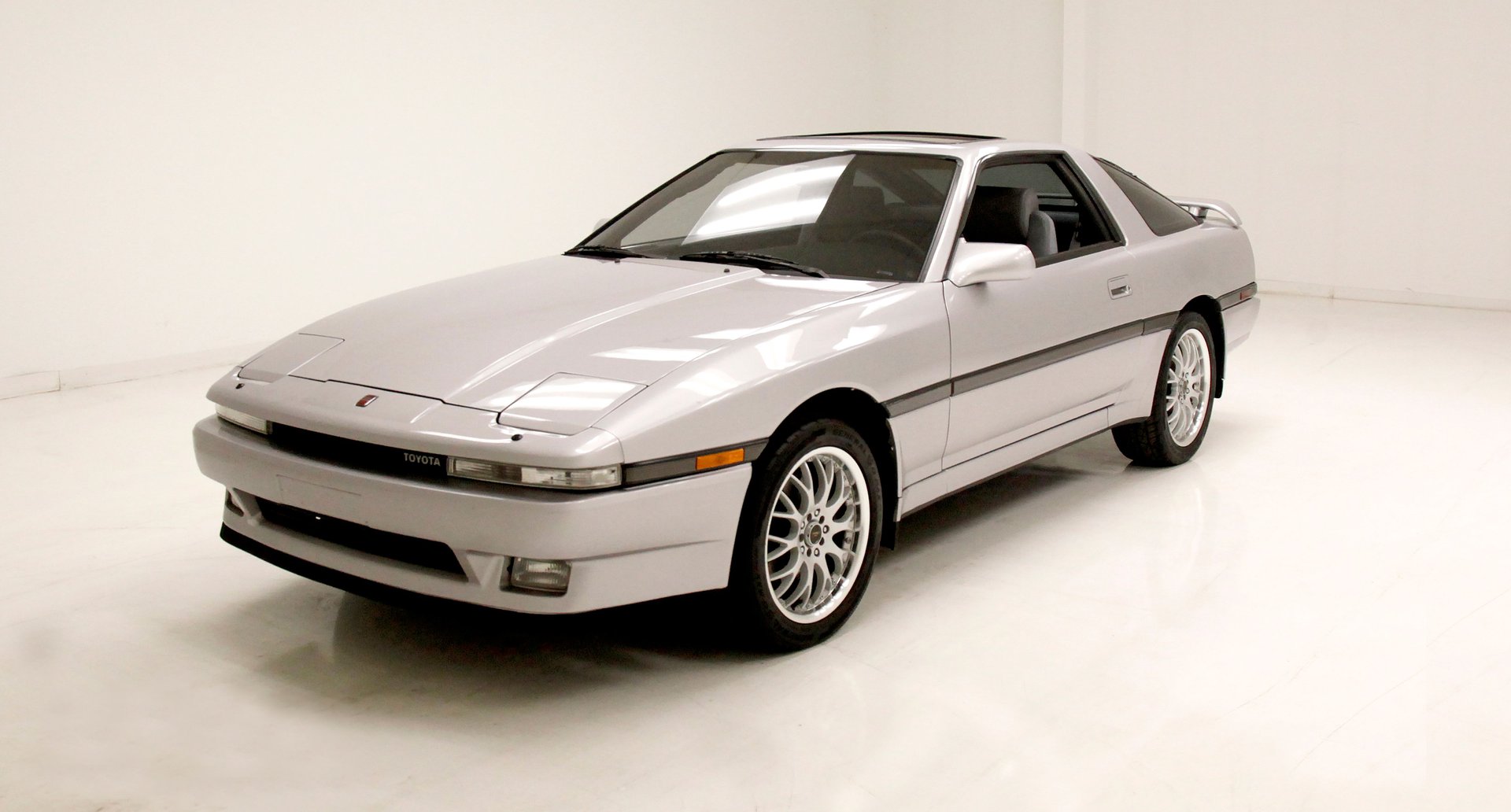 The original Toyota Supra sports car was first launched in 1978, with production only coming to an end almost a quarter of a century later in 2002. The vehicle has recently made a return, with the new Toyota Supra model going on sale in 2019. There are even plans for a hybrid version of the sporty Supra to appeal to environmental-conscious 21st century motorists.

This beloved Supra from 1987 has had two owners, the first sold the car then realized he wanted it back, so proceeded to get it back and owned the same car again!! So, it MUST be good. Our version has nice paint, hidden headlights, a sunroof, and snappy alloy wheels. It's powered by a 3.0 liter inline 6-cylinder turbo engine, and has a clean interior.

Exterior
Bathed in Amethyst Silver Metallic, it sports a front spoiler, hidden headlights, a mid-trim band in black vinyl, and sunroof. All panels are good with well minded gaps. 17-inch alloy wheels are on. Taking up virtually the entire back of the car is a large tinted greenhouse glass hatchback. Sporty but practical, all in the silver paint.

Interior
Puffy overstuffed but sporty broadcloth gray buckets are seen in front of the original dash. These chairs have large bolsters to aid in comfort and keep you in that seat when negotiating a curve possible at too high of a speed! In back a bench which takes the form of 2 bucket seats with a common mid panel fills the space between the B pillars. Nice neutral gray carpeting floods the floor, and a tight headliner sits above. This car has a center console with storage and the shifter.

Drivetrain
A pop off the hood and we see an origin all unrestored 3.0 liter inline 6-cylinder turbo engine. This is fed with EFI and has a 4-speed automatic transmission on back. The rear axle is a 3.77 version.

Undercarriage
Independent coil sprung suspension which includes Toyota Electronically Modulated Suspension, (TEMS). This system allowed the driver to select between "normal" (soft) and "sport"(medium) modes. The TEMS computer would automatically set the shocks to medium at freeway speeds, and would go firm under hard braking, acceleration, or sharp steering inputs. A major reason for this could stem from Toyota's decision to aim for a boulevard ride as well as leading edge (a claimed 1.0 g) handling. The Toyota Electronically Modulated Suspension (TEMS) may be the most complicated ever installed in a standard production car. Power disc brakes and a single exhaust inhabit space underneath. The surfaces of the floor pans and rockers are slightly faded and patina'd. There is no rust and structurally sound.

Drive-Ability
She fires right up and performs well on a cruise, curvy road or our test track which includes both. All functions were working fab, and it has some power to its traits.

Looking good for this 87 version is the Supra with its turbo engine, EFI and independent suspension which make this one of the most popular sports cars of its time. Now readily available, in our halls of Classic Auto Mall