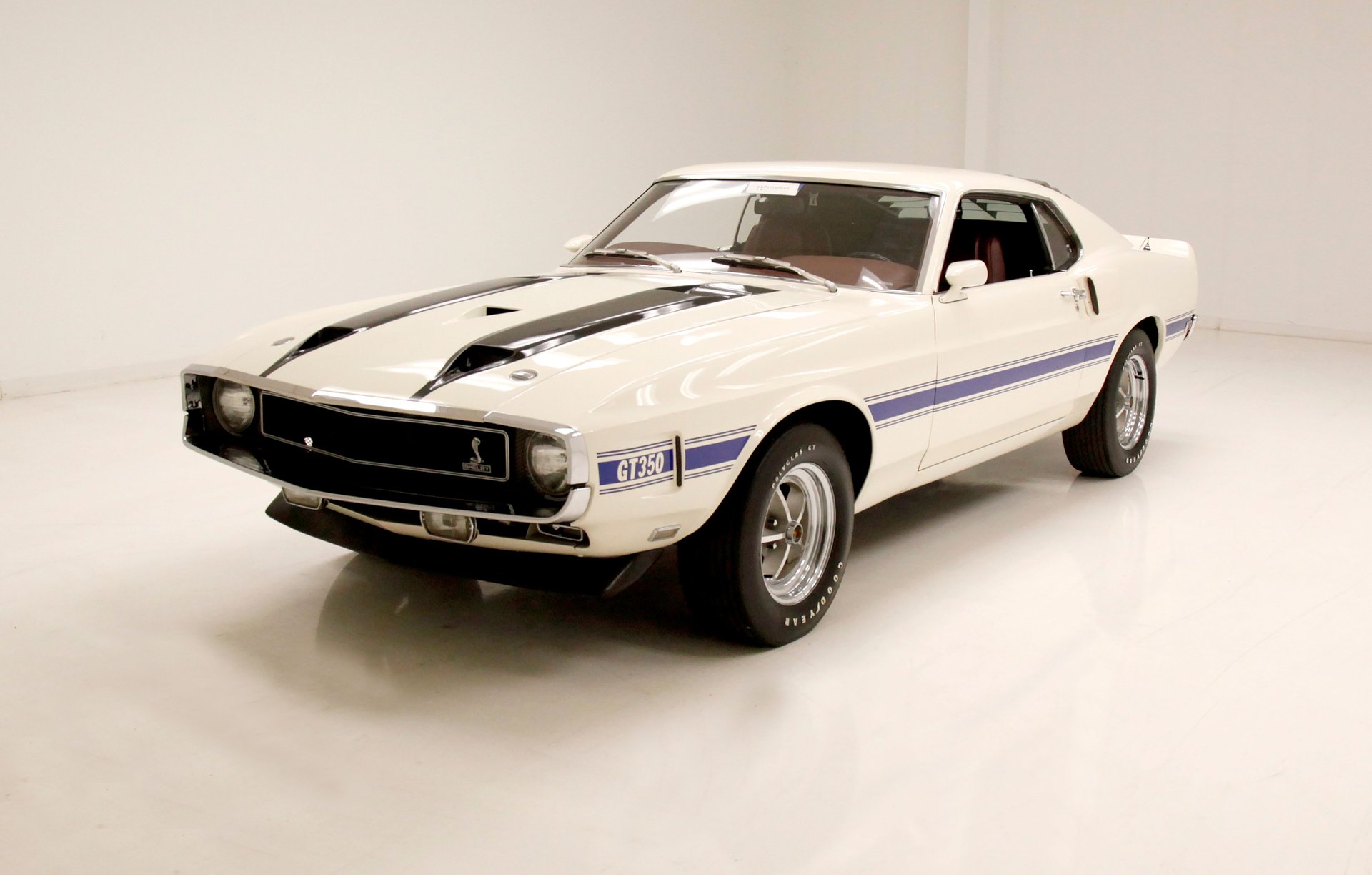 Shelby Mustangs have been around almost as long as the Mustang itself. The first Shelby GT350 debuted in 1965 and solidified the Mustang's legacy as a fast car, helping to build a racing pedigree for Ford's new pony car. Shelby took that and added to it, creating a version of the Mustang that could hold its own on the track and inspired generations of tuners. Though there are many variations of the Shelby Mustang, the one thing they all have in common is a blend of performance features and race-inspired looks that turn heads.

A funny thing happened on the way to 1970 with an interesting footnote to Shelby Mustang History. A number of 1969 Shelbys remained unsold heading into 1970. In lieu of marketing them as 1969 leftovers, Ford sent the leftovers to Kar Kraft where they were updated into 1970 models with hood stripes, a front spoiler and new VIN. This happened with a mere 789 units with even less, (261), GT350 Fastback models showing in Wimbledon White with blue stripes. Consigner stated low miles, and a 351ci Windsor V8 we give you a rebranded 1970 rare white and blue GT350 fastback!

Exterior
With the 1969/70 design we see a long, long front hood that ends with a chrome band around the front grille. This frames a black egg crate small horizontal opening with the Cobra badge and a single round headlight at either end. Below are some fog lights, another small opening for extra airflow, and a black spoiler courtesy Kar Kraft. The long hood has dual scooped openings and long open bumps painted in black in contrast to the Wimbledon White background. The front fenders sport the beginnings of the triple blue stripe indicative of the GT350's and this runs the length of the sides of this machine. On the rear quarter is a small air vent, the only textural exterior feature on this model as the hockey stick cove is gone. A black large louvered rear glass gracefully descends to the trunk lid which has a small spoiler atop. On back are two bars of sequential taillights and a small bumper neatly inserted to frame the bottom of the roll pan which sports the round bezel reverse lights. 15 inch Shelby cast wheels are on all 4 corners and are wrapped in F60-15 Goodyear Polyglas GT raised white lettered radials. Straight original steel, nice paint and the blue stripes all come together to create the Kar Kraft 1970 Fastback GT350.

Interior
A swing of the extra long doors to allow easier access and we see burgundy molded vinyl uppers which house a large wood appliqué cobra badged panel just above the armrest/door pull. Below is a band of burgundy carpeting and a few chromed accents, (mirror joystick, window crank and a courtesy light), are embedded within these fields. Inside high back seats with headrests are awaiting the passengers. These seats are covered in red vinyl and have tuck and roll inserts with smooth bolsters. In back are matching pattern and color 2 plus 2 seats in bench format. Racing through these buckets starting in front of the back bench is a black and wood appliqué center console. This houses the T styled shift lever and has small openings to hold the seat belts when not in use, and joystick style switches for courtesy lighting. Moving forward prior to the rise upward in the center of the dash are 2 gauges proudly pointing toward the driver indicating oil pressure and alternator voltage. Rising upward is the climate controls and another wood appliqué panel which has the radio. Then we move to the center dash which is molded plastic padded in burgundy color center panel that creates the eyebrow coves for the glovebox and instrument clusters. Deep round inset gauges in front of the drilled rally cobra badged wood rimmed steering wheel. A chronographic clock is inserted into the wood appliqué panel above the glovebox on the passenger's side. Burgundy carpeting floods the floors and is excellent and a tight red headliner with a roll bar behind the front buckets is seen above.

Drivetrain
Under the pristine painted in black inside hood is a nicely presenting blue painted block and ribbed cast valve covered 351ci Windsor V8. This block is correct for the year and model of the car; however the vin stamping is incorrect but has the correct casting number, (C90E-6015-B). Under a blue painted open air filter housing is a 4-barrel carburetor and on back is a correct FMX 3-speed automatic. This pushes power rearward to a Ford 9-inch 3.25 TracLok rear axle. All clean and supple hoses and wires with all looking good under this hood which has a RAM air-esque seal that matches up to open air cleaner.

Undercarriage
Underneath beautiful black stamped metal floorpans and rockers are within the confines of the remainder of the mechanicals which include clean independent coil spring front suspension, and leaf sprung rear suspension. Power disc brakes are on front, and power drums on the back. A shiny Flowmaster dual exhaust provides the exhale accommodations for the Windsor V8. In the interest of full disclosure , and subject to your independent inspection, the driver's side shock tower appears to have some Bondo at the bottom and floor pan repair was completed with the overlap method rather than butt welded in, although all remains seemingly structurally sound.

Drive-Ability
This car fired right up and on the test track it performed exactly as expectations dictated, fabulously! Great snappy acceleration, bias free panic stopping, and smooth automatic shifting. Handling was spot on, and all functions were working just fine.

An interesting story of how this rare version of the now 1970 GT350 came to be, and all packaged to look great, run wonderfully and all done with low consigner stated but not verified original mileage. Comes with an Elie Marti report. Gonna go quick, I can just feel it!