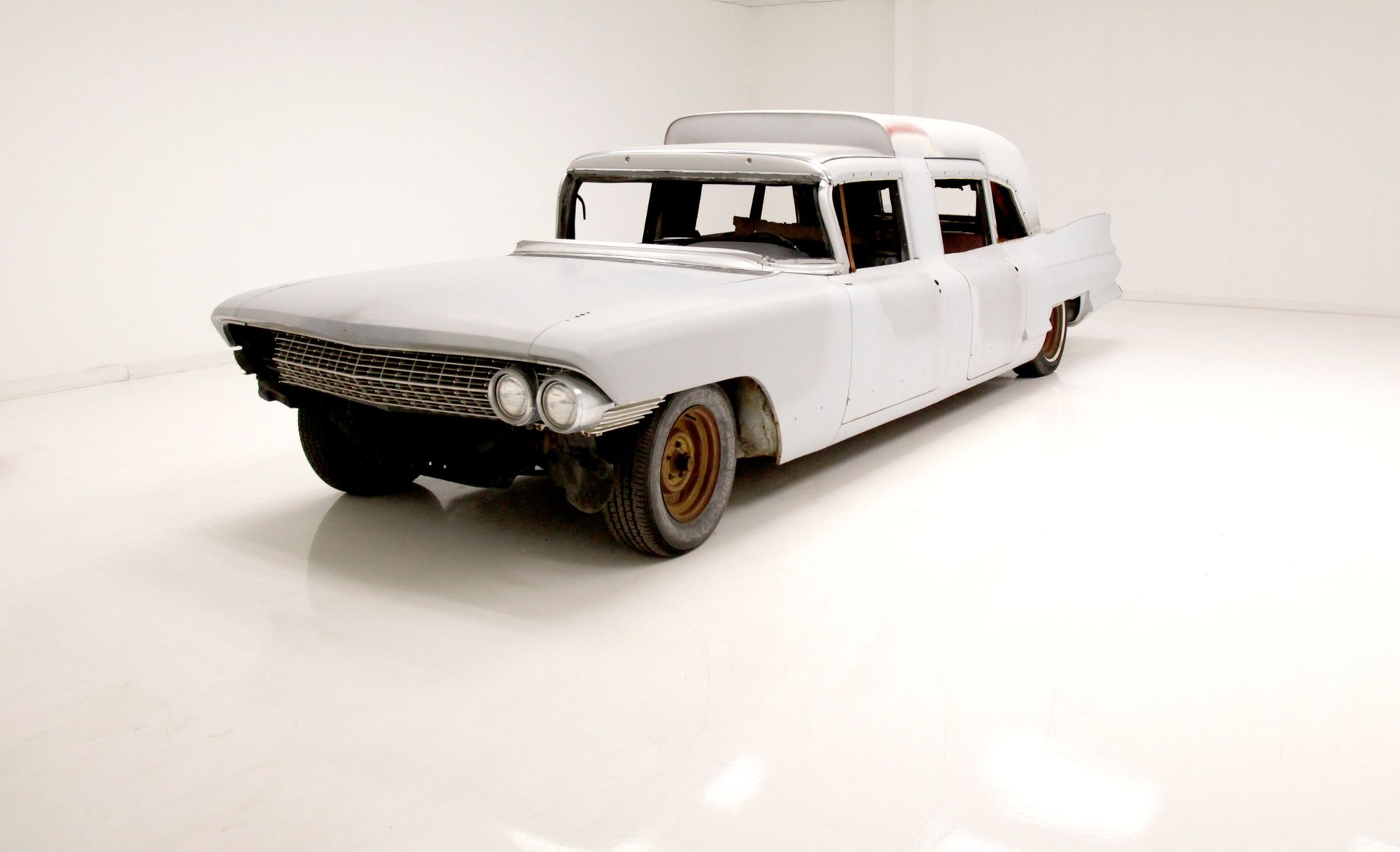 lim·ou·sine
/ˈliməˌzēn,ˌliməˈzēn/
noun
A large, luxurious automobile, especially one driven by a chauffeur who is separated from the passengers by a partition. "The Prince was whisked away in a black limousine."

For consignment a parts car in the form of a Series 75 Cadillac Limousine from 1961. This car is in the very beginning throes of being a new prefabrication effort, particularly in the passenger roofline, which has been bumped up higher for more interior headspace. All in primer gray, very little chrome attached, and will need a full interior restoration/rebuild.

Exterior
What was long, became even longer with the series 75 as it is only short by a few inches from the largest offering of the time from Cadillac the full limousine. Our example has had all rust removed from the body panels, they have all been filled and primed, mostly smoothed over, and awaiting paint. The roofline is now bumped upwards at the B pillar and extends to the back trunk lid deck. The car retains its fins, is ready to accommodate a rear bumper and taillight insertion after the paint. The front grille is currently on but no bumper. Gaps are looking fairly straight, and a few areas of some surface rust have formed since the bodywork has been completed. Slight cracking in the form of stress fractures is noted throughout where an excess of body filler was used and now has dried out creating this phenomenon.

Interior
A swing of the doors reveals mostly bare bones metal with no panels inserted. Front seats are a tuck and roll leather bench in black and very dirty. The original dash is still there however not in working condition. Floors are extremely rusted, and the thresholds are questionable as to stability on the frame. A large cardboard box resides behind the front bench and contains various parts for this car which were not inventoried. In back is a red velour covered bench seat back only, and more metal parts on the seat portion. Curtains are behind this seat and they will utilize the higher headroom to provide more privacy. Above the chauffeur is black leather for the headliner, and in back the expanded roof is covered inside with red velour which is becoming detached at the edges of the interior roofline where it meets the doors.

Drivetrain
Under the hood is a surprisingly clean blue block and valve covered 390ci V8. It is topped with a 4-barrel carburetor. A 4-speed Hydramatic automatic transmission is on back with a 3.36 designated rear axle.

Undercarriage
A heavy coating of surface rust is seen throughout the underside where we can see, as this car will not fit on our lift. Some rust on the rockers and worst of it is at the seams it has begun to invade the floor pans as invasive rust. The exhaust system is rotted out and suspension and brake housings are suffering from extensive surface rust. I would have to say despite all this surface rusting the car appears structurally sound, but you will want to 100 percent verify this prior to your purchase due to our lift limitations and to completely verify we are not missing anything due to the constraints. Independent coil springs for the front and a 4 link with coil springs for the back and drum brakes are on all 4 corners.

A long piece of classic luxury in the throes of a major restoration, now ceased and awaiting the capable hands of a Caddy aficionado to take it to the next level. Not running or starting, and ready for the picking.