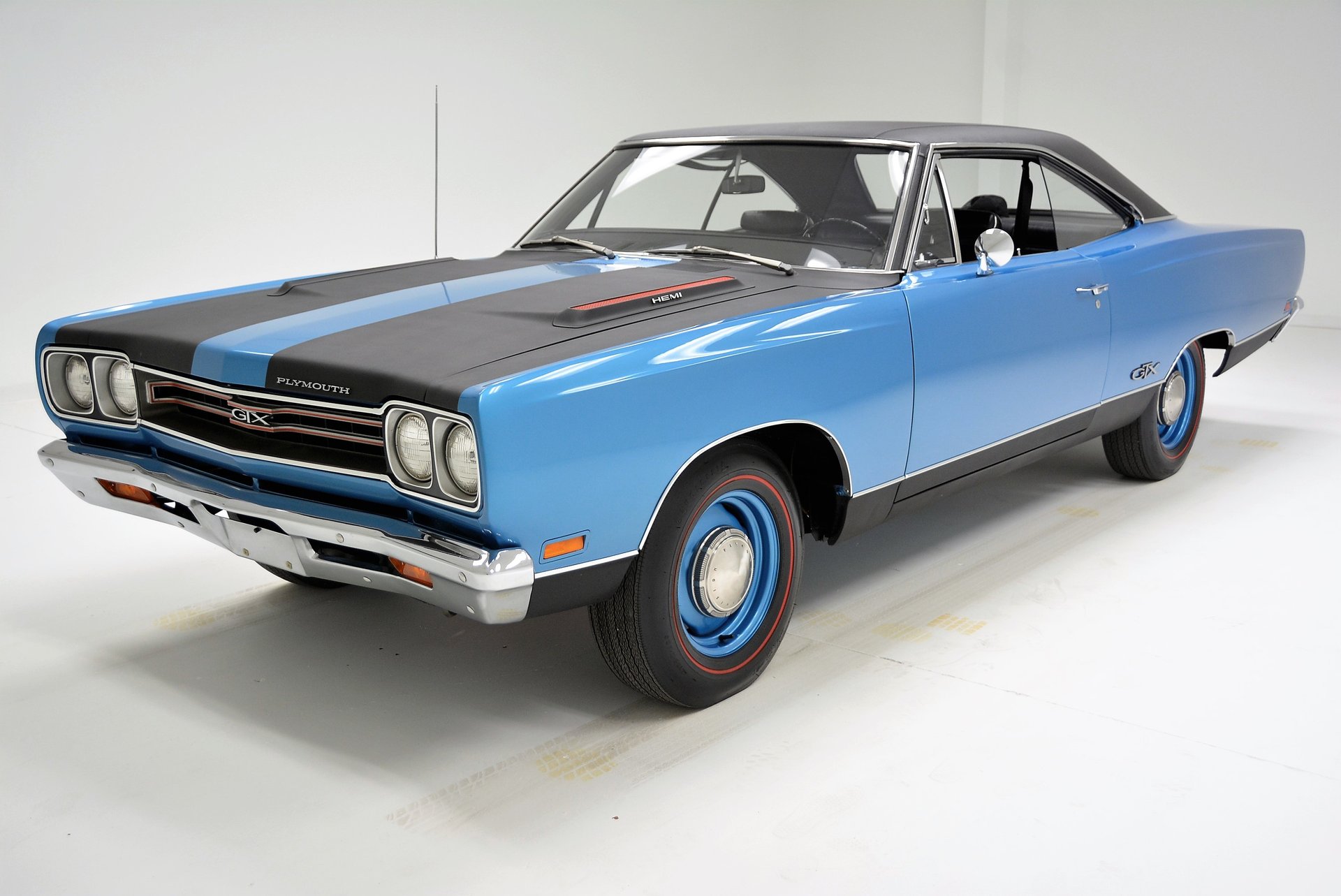 The Plymouth GTX arrived on the muscle car scene in 1967 as Plymouth's serious contender, a hot rod version of the square Belvedere, with a Hemi V-8 option. Base motor in the GTX was the 375-hp, Super Commando 440-cid V-8, capable of 0-60 mph in 6.8 seconds, with a quarter-mile time of 14.6 seconds and a top speed of 121 mph. And that was when the car was equipped with an automatic transmission and not an optional 4-speed. The 426 Hemi option cost $605 extra and only 703 GTX hardtops and 17 convertibles were so equipped in 1967.
The Plymouth GTX became a little curvier in 1968, and its position as a luxury hot rod was strengthened with Plymouth's introduction of the more affordable and basic Road Runner. Engine choices remained unchanged from the previous year and continued that way through 1969. Drag test showed that the 440-cid Super Commando V-8 led the 426-cid street Hemi for the first eighth of a mile, until the Hemi came “on the cam” and won by about two car lengths. With a 4.10 rear axle a 440 motor, the GTX could turn 0-60 mph in 5.8 seconds and a quarter-mile in 13.7 seconds at 102.8 mph. Exterior changes in 1969 were minimal with just a new grille and taillights.
Model year 1970 was the last for this body series, and the Plymouth GTX received a new grille, new hood, and new fenders. The 440-cid Super Commando remained the base engine but options included the 390-hp Six Pack with three two-barrel carburetors, or the 425-hp 426-cid street Hemi with dual four-barrels. That same year the convertible GTX was discontinued. The 1971 model year was the final year for the Plymouth GTX. It was priced at $3,733.
Due to its high cost relative to the Plymouth Road Runner, the GTX is relatively rare today. The cars were incredibly quick, but also invariably better equipped than most other muscle cars of the era, which makes good originals worth seeking out. Hemis are the rarest of the breed, and priced accordingly, but the 440 cars are generally easier to live with and provide an exhilarating ownership experience in their own rights.

1st time offered for sale in over 20 years.


Classic Auto Mall is a 336,000-square foot classic and special interest automobile showroom, featuring over 100 vehicles for sale with showroom space for up to 1,000 vehicles. A 450 barn find collection is currently on display.
This vehicle is in our showroom in Morgantown, Pennsylvania, conveniently located just 1-hour west of Philadelphia on the I-76 Pennsylvania Turnpike. The website is www.classicautomall.com and our phone number is (888) 227-0914. Please contact us anytime for more information or to come see the vehicle in person.