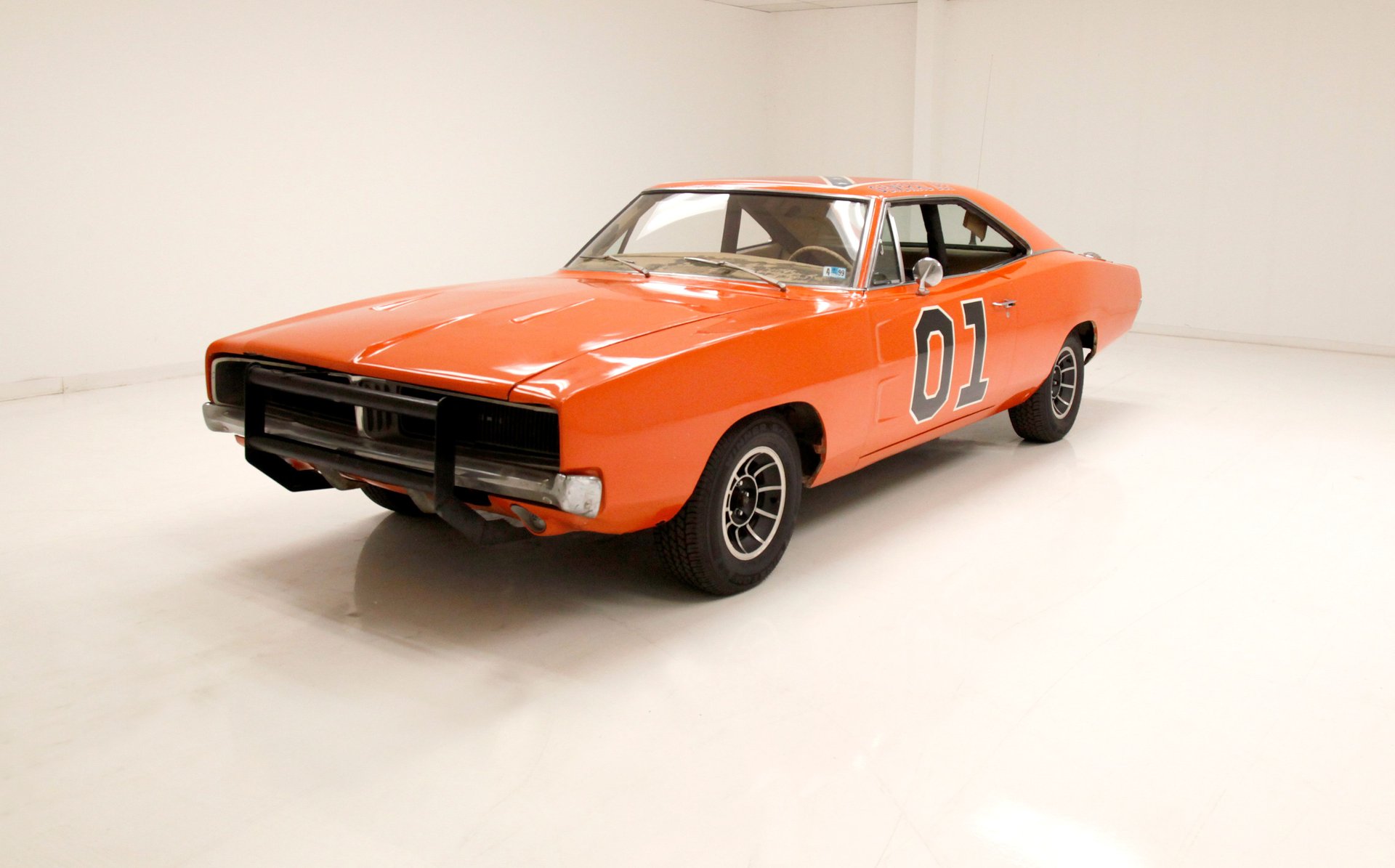 Dodge Chargers are popular because they're fast, but they're also spacious, comfortable and surprisingly luxurious. They're also popular thanks to the Dukes of Hazzard TV fame, often thought of and seen as the star of the show, the General Lee. The Charger that was always one step ahead of ole Rosco P. Coltrane and Boss Hogg and kept them Duke boys safe episode after episode. This writer highly doubts that there is any other car, be it from TV or film, that is as easily recognizable as the 1969 Dodge Charger General Lee.

For consignment, and now gracing our hallowed halls here at the Classic Auto Mall, we give you one of the original 17 Dodge Charger General Lee stunt cars used during TV filming. Dubbed GL35, also known as the "Ski Car" due to it being used for the driving on 2-wheel stunts and is easily recognizable in episodes of the show. The car was also used for some minor jumps, speed driving and car slides. Wearing its original, (well, original to the TV show), paint, 01 decals, lettering, larger than life stars and bars on the roof and backed up with paperwork from Warner Brothers and Wayne Wooten, welcome to Hazzard County ladies and gentlemen.

Exterior
Bathed in its TV appearance orange and exactly as found in 1991 this Charger shows some battle scars that it wears with pride and shows very well for a stunt car. What most people will not notice is that this Charger is indeed a 1968 not a 1969; Charger pickins must have been getting slim so Warner Brothers used some 1968 Chargers and added in 1969 grilles and taillight panels. The signature push bar/grille guard is present along with the CB whip antenna on the trunk lid. Decals are all present and original. All 4 corners are held up by American Racing Vector wheels that have been restored and are shod in Winston Winner tires, while not original, are known to have been used during filming. The 4 original Warner Brothers ID stamped wheels are included with the sale.

Interior
Stunt cars don't need all the frills and luxury that a normal vehicle does, and this car shows that quite well. Tan, tan, tan as far as the eye can see inside, from the vinyl covered door panels to the bucket seats to the dashboard. Worn and hanging vinyl covers both doors with worse wear on the driver's side. Tan vinyl covered low back bucket seats, (the driver's seat being welded in place and set perfectly for the one and only stunt driver Buzz Bundy), that show wear, fading and tears flank a full-length console that contains a storage area and the automatic floor shifter. A tan bench seat showing similar wear to that of the driver's seat is in the back and is almost inaccessible due to the trademark General Lee rollbar. A worn steering wheel fronts the dash which shows a speedometer, clock and other vital engine function gauges. An AM radio is mounted above the HVAC controls and a CB radio is down low and center. Signatures abound on the dashboard and include some of the cast of the TV show, race car drivers and other celebrities. The headliner and carpet were removed for stunt driving and a black push button resides on the floor along with a rollbar plate welded under the accelerator pedal for smooth speed control. Ya'll got your ears on? Come back?

Drivetrain
Opening the hood, we are greeted with a non-original 318ci V8 that sports an Edelbrock intake and Holley 4bbl carburetor. The original carburetor with bent floats to accommodate the 2-wheel driving is included with the car along with some other parts that were changed out in the name of safety. We note power steering and a fabricated 2" steel bar tying the shock towers together for more structural integrity that is required for stunt driving. A 727 Torqueflite 3-speed automatic transmission sends power back to a Mopar 8 3/4" rear axle that has had the spider gears welded so it's a true locker, a Lincoln locker if you will.

Undercarriage
All solid down below, all we can spy is some undercoating and a healthy coating of Hazzard County road dirt. Headers send spent exhaust gasses to the rear of the car passing thru glasspack style mufflers along the way. Torsion bar suspension provides the ride up front and leaf springs handle the rear. These leaf springs also have a pair of helper springs added and the car retains its original rear shocks used during filming and are easily identified as being on the car in films of the show. Drum brakes all around bring the car to a whoa in a sufficient manner. A thank you note is written in sharpie marker on the passengers rear lower 1/4 panel and denotes back to when the car was sold from Wooten's Chargers to a prior owner.

Driveability
Normally my crack decoder and muscle car aficionado and myself draw straws for the honors of a first drive. This time around we decided to go for a more fitting contest. Both having watched the Duke boys running to the General we tried our best to emulate them with the across the hood slide. While neither of us ended up in a body cast, I won and had the first drive. With the driver's seat welded in place it was a cramped driving position for me, but ultimately a comfortable fit. The car offered plenty of acceleration, bias free braking and handled our test track with ease. The highlight of the drive was hitting the Dixie horn when driving by a crowd of stunned onlookers. All functions worked properly save for the speedometer and the headlights not opening. No jumps, slides or driving on 2 wheels were tried during our test drive but the thought did cross my mind... Hazzard County may be the only place that I know of that needs an air traffic controller for cars!

Owning a vehicle with this pedigree will definitely keep you as the talk of the town. Sporting all the original decals, lettering, paint and interior along with a statement of authenticity from Warner Brothers you could be the next proud owner of one of the holy grails of General Lee and Dodge Charger collectability. Please be aware that this car is not legal for open road use but with some minor repairs could achieve that status. Also, the new buyer must sign a contract with Wayne Wooten's company and Warner Brothers and adhere to commercial restrictions placed on documented General Lee's.