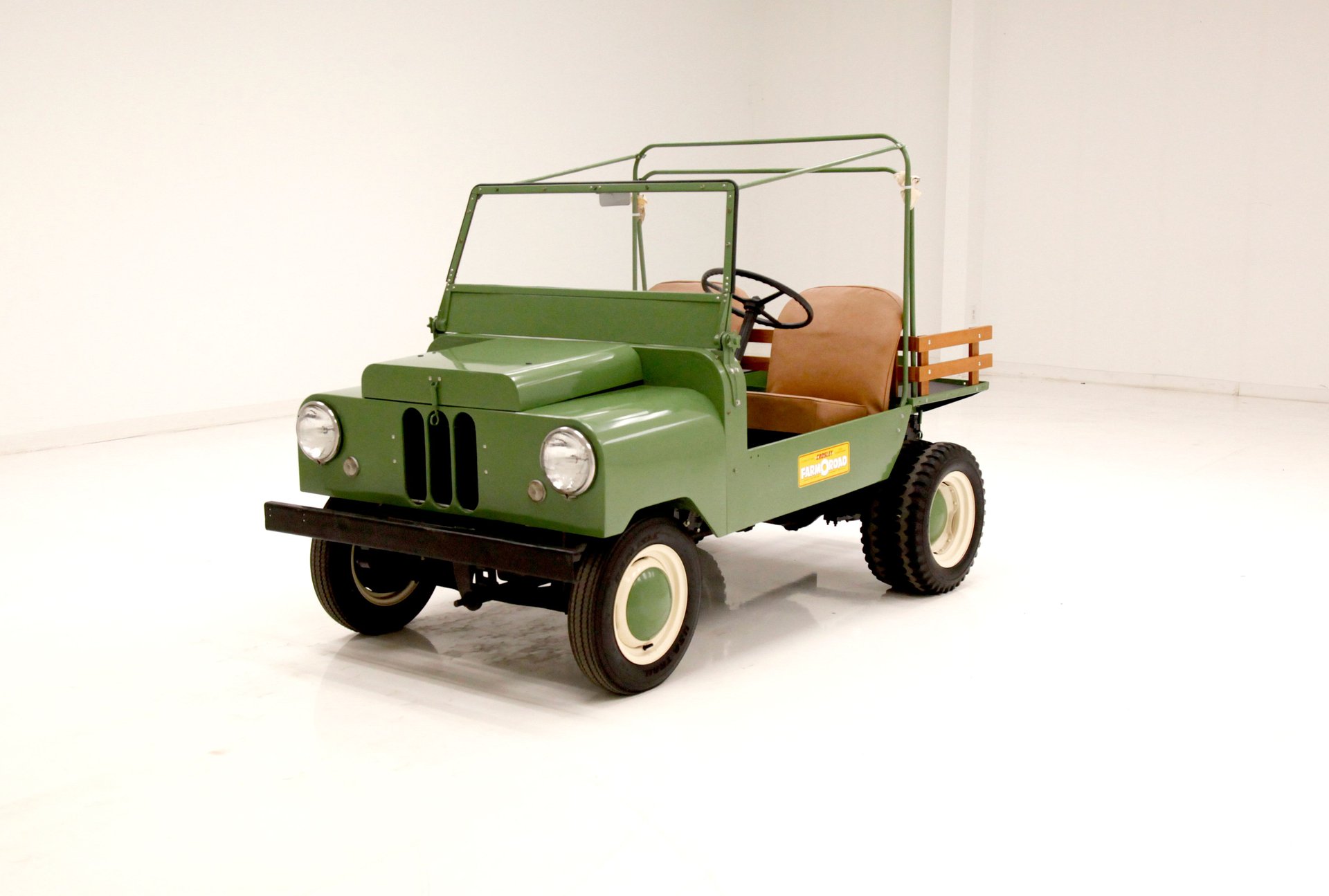 If you ask a Crosley Farm-O-Road owner if his rig is a 4x4, he'll answer, “Of course! Four traction tires, and all four are powered.”. He doesn't mention that all four of those traction tires are on the same axle. The Crosley Motor Company is best remembered for building economical small cars way before it became popular, but they also had connections to the world of four-wheel drive and utility vehicles. Thx to Jim Allen for this info!

And now for something completely different…a Crosley Farm-O-Road early “gator”style of vehicle. This Farm-O-Road took its cues from the Jeep and the wartime Pup. It has a boxy, minimalist body with everything you absolutely needed but nothing you didn't. It weighs 1,100 pounds, has a 63-inch wheelbase and just about everything was extra. Even the detachable rear cargo box cost an extra $25. Two models were offered: the FOR-1 at $795 (1950s prices) and the FOR at $939. The difference was the presence of a hydraulic system and a hydraulically operated drawbar, both of which could be also added as an accessory. Front and rear PTOs were an option, which this worker bee has!

Exterior
Small but mighty could best describe this pre “Gator” vehicle. This example comes to us perfectly restored, bathed in green and made of simple straight steel fashioned to emulate the looks of the ubiquitous Jeep. Much smaller scale though but still using the curved hood, side flanking rounded integrated fenders and vertical oval grille. This example has a stake bodied rear deck with the wood surrounds and a rubber covered floor. A frame is on to support a canvas top which is not with this truck but certainly can be added. Cream painted 12-inch wheels with green moon capped centers are on all 4 corners, however the rear wheels are dual tired. On the passenger's side is a snazzy spare neatly mounted to the back of the front quarter. Black bumpers, which are a single straight piece of steel are on front and rear.

Interior
Wide open top to the fresh air we see 2 low back buckets covered nicely in tan vinyl. These are fronted by a fabricated metal dash and triangular support emanating from the dash to hold the tall steering column and wheel. In the center is the utilitarian dash with dual round gauges, the one on the left being a cluster and the right the speedometer. Rubber floor mats cover all surfaces and are very clean. A shout out to the fold down windshield to make your drive even more “airy”.

Drivetrain
A lift of the mini hood reveals an all buttoned up and fully restored gasoline engine. This sums up as a 44ci 26.5hp cast-iron overhead cam four-cylinder. This was a tiny, but very potent and surprisingly durable engine. It had a very long production life that surpassed Crosley by decades. The engine was backed up by a three-speed Warner T-92 transmission with a two-speed PTO-capable range box mounted behind. The reduction in the range box was 4:1 and combined with the 5.38 axle gears in the narrowed Spicer 23, the crawl ratio was 70.0:1. The Farm-O-Road had a mechanical traction aid in the form of brake lever that operated as a parking brake on both wheels but could also be operated on each rear wheel individually. This engine bay can best be described as pristine!

Undercarriage
No runs drips or errors and even no rust under here as it has been meticulously restored. Leaf spring suspension, and drum brakes are noted on all 4's. We can see the optional added front and rear PTO's available to operate several instruments that were available at the time.

Drive-Ability
You will not hit any breakneck speed, but you will have plenty of power to haul stuff around, and even add on several accessories to the two PTO's. It fired right up and idled very smoothly. It honestly rides like a buckboard, but then again how far are you really going to go?! All was running nicely, although the speedometer and odometer were inoperable at the time of the test drive.

A somewhat rare example as it is not exactly known how many were produced, but it is thought to be around 600 from 1950-1952 when sadly production was shut down and meant the end of the Farm-O-Road. It did however usher in the UTV. OK, so it isn't a “true” 4x4, but we hope you'll accept the Farm-O-Road owner's definition of four-wheel drive with a wink and a nod just because it's so cool! And indeed it is…