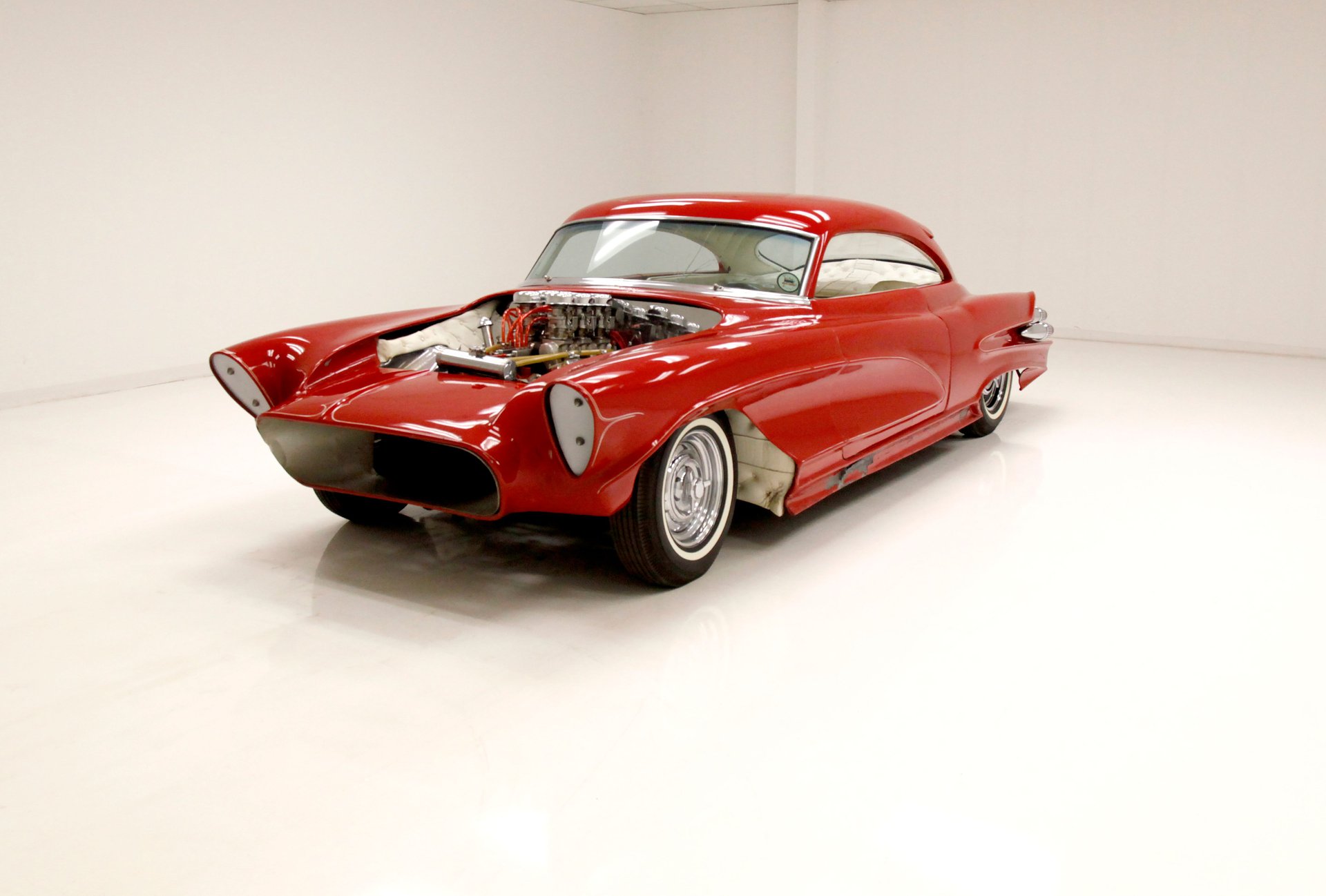 The custom car of the 1960's is a uniquely American creation. The melding of automotive styling and hot rodding came to a high point in this era. The pure artistic expression of these rolling sculptures has brought new appreciation to these cars as expressions of their time. Custom cars of the 1960s varied from mildly modified stock machines to the most ambitious re-workings like "Truly Rare". Heavily reworked customs are completely new cars as they bear no resemblance to whatever served as the starting point. Because of their impracticality most elaborate customs are lost today. Since they were not typically intended for road use, they did not have much practical use. Until only recently were they appreciated for what they are and but then it was too late as the majority that had been lost to time.

For consignment the results of what would happen if you took papers from the desk of George Barris, some key elements of design from the likes of which would be a Lotus 7, a 54 Corvette cove, throw in not 1 but 2 sets of futuristic Plymouth 60's rocket style tail lights, and carved out a cove in the rear quarter just for them. A powerful blinged out mill, and all wrapped in white Naugahyde and threw it all up in the air? When the dust settled…I could give you for consignment the 1950 “Truly Rare” custom Buick creation.

Exterior
This ambitious undertaking by body man Gene Howard of Bloomington, Illinois survives in time warp 1960s condition. At the heart of this car is a 1950 Buick. The body bears little resemblance to a Buick as it is equal parts '51 Olds and '50 Cadillac. The front end and sides are heavily reworked with a flowing plastic look. All this is bathed in red, a respray over what was purple. The red is showing some age with cracking and crazing and a bit of orange peel from overzealous spraying. Headlights are a teardrop tilted at an angle and these melt into the front of the car which looks more like a 1960s Indy car than a Buick. On the front quarter is a large Corvette cove that forms itself into the shaved doors, chopped roof line and eventually the rear of the car with the Plymouth futuristic taillights in their own custom cove within the rear quarter. The back half of the car utilizes a fastback pontoon style rounded look and has some pinstriped flourish highlighting added on just for fun. 16-inch chrome steel wheels are wrapped in medium wide white sidewall rubber on all 4 corners. A major crack is in the front windshield. Body-wise some invasive rust has taken over areas of the rockers, and plenty of paint chip off can be noted on all the seams. The front of the car has had a few encounters with something that was not friendly to the steel surround of the “grille”.

Interior
A swing of the custom doors and we are in white Naugahyde heaven. Here it's been overstuffed and buttoned, piped, and made into 3 separate panels to cover the mechanicals of the coved exterior doors. Simple buckets, in white Naugahyde sit directly on the white shag carping, and we are talking Elvis Graceland long pile shag…yeah baby! A wide central buttoned and tufted white Naugahyde console runs the length of the interior and there are 2 more simple buckets sitting on the shag in back. Not to be outdone, the dash is also buttoned white Naugahyde. Within this dash front are 4 chromed headlight styled complete with visors round gauges aimed directly at the driver all on an angle towards the driver. A wonderfully futuristic Buck Rogers style speedometer in the center and it has shades of the personal jukebox oft seen in days of yore on your table at a diner. I'll pick H2… A rally steering wheel fronts this dash, and as for the future vision, things are kept fairly simple!

Drivetrain
Don Wallace prepared the hot '51 Chrysler engine. The 364ci Hemi features a ¾ cam and six 2bbl Stromberg carburetors on top of an Edelbrock intake. A 3-speed manual transmission propels the car into the future. It all looks good under the …well…no hood!

Undercarriage
A smattering of areas of light surface rust is noted where the rustproofing has worn off over time. A solid X frame remains, and floorpans and rockers are in good condition. Independent coil springs for the front, and a 3 link with coil springs is on back. Drum brakes are on all 4 corners and dual glass pack steel exhausts are noted underneath.

These not for everyone self-styled customs were once ubiquitous on the American car landscape. All the new crop of body men who wanted to create a name for themselves were all trying to outdo each other on the outrageous scale. This car definitely accomplishes that and then some. It's in fair condition, needs a bit of TLC and currently does not run. BUT it does have the reputation preceding it…just Google “Buick Truly Rare” and you too can be the only one on your block that drives a work of automotive art!

Offered at $34,900
view inventory
Thank you for your interest! We'll get back to you soon!
Speed Digital