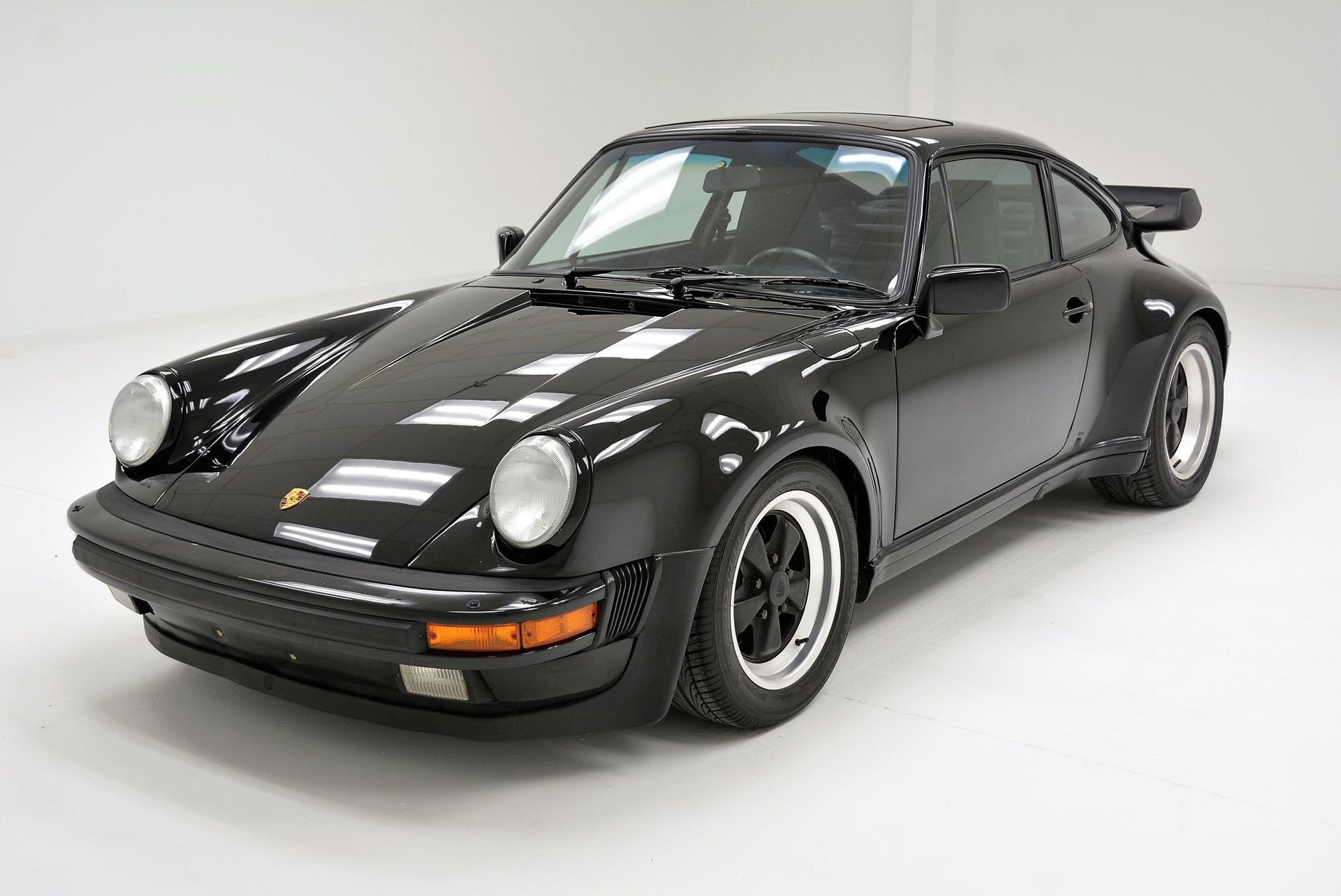 The 911 wasn't always the 911. Porsche's flagship was originally called the 901 and debuted under that name at the 1963 Frankfurt Motor Show. The car was a hit at Porsche's home show, and the company promised to start production the following year. Around 80 preproduction 901s were built, before Porsche received a letter from Peugeot. The French automaker argued that it had exclusive rights to car names consisting of three numbers with a zero in the middle. Indeed, Peugeot still uses that naming scheme to this day. Porsche had already ordered a mess of metal 9s, 0s, and 1s for the cars' badges, and didn't want them to go to waste. So, it changed “901” to “911,” and the rest is history.

Offered for consignment is a 1988 911 Turbo in black with black leather interior. Tastefully enhanced with a larger turbo intercooler, adjustable strut brace and turbo boost control, this 911 Turbo is a road hugging rocket ship. With air cooled Porsches continuing to be high on collector's list, this Turbo will check all the boxes for future driving pleasure and return on investment.

Exterior
The body shape incorporates large flared fenders, and a big rear spoiler often referred to by the faithfuls as the “whale tail.” This German sports car is adorned with the frog eye headlights mounted on rounded fenders, and the front hood that sweeps downward between the headlights to a thin grille, resembling a frog. Seen on top is a power sunroof, and all the steel panels are bathed in black paint, in good condition. The iconic Porsche rally wheels are on all 4 corners and are wrapped by Ventus HR2 all season radials.

Interior
In typical German simplicity, the interior reflects the design of the times with mostly squared off rectangles and squares with gauges, buttons and toggles embedded within specific areas. The dash is in black and all round design gauges are imbedded within the squares . Tall buckets which have power controls are covered in a black tuck and roll leather, and a rear 2+2 seat is shoehorned in the rear, split by the rear drivetrain hump. Dark gray carpeting and carpeted floor mats cover the floors and appear clean.

Drivetrain
The 930 (AKA 911) was a street version of the highly successful racing derivative 934 model. In 1978, Porsche enlarged the size of its engine to 3.3 liters, now producing 300hp. The larger engine addressed the level of turbo lag which was inherent with the 3.0 version. Tastefully enhanced with a larger turbo intercooler, adjustable strut brace and turbo boost control, you can get pressed into your seat fairly significantly.

Undercarriage
All is looking good underneath, with little to no rust to remark about, all mechanicals working together, and seemingly well maintained.

A nice example of the 911, runs great, starts quickly, and goes through the gears smoothly, all wrapped in beautiful black. If you have a flare for wide fenders with rear tires to match, I have a whale of a tail for you! Snell! Snell!!


Classic Auto Mall is a 336,000-square foot classic and special interest automobile showroom, featuring over 100 vehicles for sale with showroom space for up to 1,000 vehicles. A 450 barn find collection is currently on display.
This vehicle is in our showroom in Morgantown, Pennsylvania, conveniently located just 1-hour west of Philadelphia on the I-76 Pennsylvania Turnpike. The website is www.classicautomall.com and our phone number is (888) 227-0914. Please contact us anytime for more information or to come see the vehicle in person.