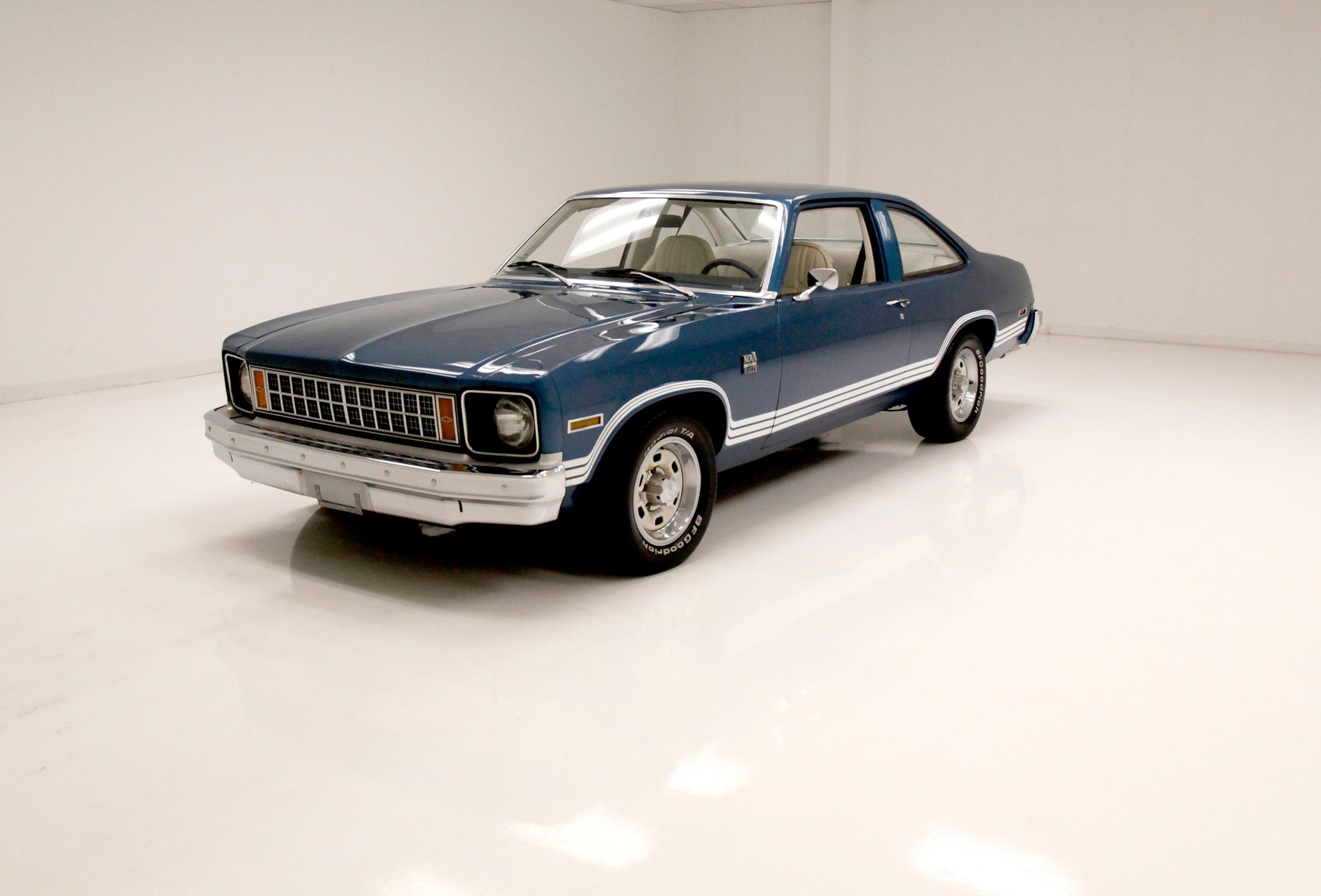 The Nova was offered in 1971 and 1972 with the RPO-YF1 Rally Nova option. In 1977 thru 1979 the Nova was offered with the RPO-Z26 Nova Rally option. The first time around, the Rally option was a pseudo muscle car. It had the look of a muscle car with stripes and rally wheels but it could not be ordered with the SS-only L48 350 4-bbl engine. You could get a 250, a 307 or the L65 350 2-bbl. This was done for 2 reasons, people who wanted the muscle car look could have it without paying for the more expensive Super Sport option. The other reason was because of the surcharges applied to owners of "real" muscle cars. The SS was more expensive to insure because of the top engine. The Rally option ended after 1972 because beginning in 1973, you could order the Super Sport with any engine (250, 307, L65 350 2-bbl and the L48 350 4-bbl). You could also now order a non-SS Nova with the top L48 engine. The second time around the Rally option replaced the Super Sport option dropped after 1976 and it even carried the same code: Z26. The option was basically just a name change as it was mostly the same as the 1976 Super Sport option. It included different stripes, the grille was now chrome instead of black and the F40 suspension was no longer part of the Z26 option (however it could be ordered separately).

For consignment, a 1977 Chevrolet Nova Rally. This one with a 305ci V8 inserted, a 2-barrel carburetor and a 3-speed automatic. The exterior still looks like a muscle car with a somewhat mild-mannered powertrain keeping operating and insurance costs lower.

Exterior
For 1977, a now chromed egg crate grille with a shiny bumper framing it below leads the way. Turning the corner to the front quarter and aligning up with the level of the front bumper is a snazzy triple wide pinstripe which melts together over the wheel wells as 1 stripe then spreads out with the original 3 stripes just above the rockers and on to the back of the rear quarter panels. All the remainder of this car is bathed in a dark blue metallic respray. Some rust invasion can be noted on the various seams of the body panels, as well as some dings that have pierced through the paint, and areas of crazing can be seen. All remaining trimmings are shiny with some rust showing up on the passenger mirror. A quasi fastback rear deck is within this 1977 design rolls over gently to the rear taillight panel with the shiny and pristine rear bumper below. Dual chrome tipped exhaust pipes peek out from underneath and 14-inch rally wheels are on all 4 corners.

Interior
In true mid 1970's form a white vinyl interior and square and rectangle design abounds inside. The door panels use molded white plastic screwed on to the bottom of the doors and are showing slight waves to them. Minor soiling is on the white, but if a thorough detailing is performed it would improve greatly. Slightly dirty high back buckets are in front in white vinyl and a bench in the back which shows some cracking of the vinyl on the top of the bench, and one can see the inner padding. A shiny lacquered faux wood grain dash houses the square and rectangle design dash. The padded blue dash top is cracked. Plastic on the pillars and door tops is cracked and will need replaced. A white headliner is above and is slightly wavy. Below faded blue carping covers the floors and a black center console is on the hump.

Drivetrain
Under the hood is an original unrestored 305ci V8. This is topped with a single 2-barrel carburetor and has a TH350 3-speed automatic transmission on the back. Overall condition of engine and bolt ons could best be described as having a fine coating of surface rust on all surfaces.

Undercarriage
A smattering of surface rust can be seen throughout, some invasive particularly on the rockers. Some of the rust is heavier in the suspension and brake parts, and on the framing for the back of the car. Floorpans have a heavy coating of rustproofing. Invasive rust is seen on the heel toe boards and will require a repair. Power disc brakes are on front, and power drums for the rear.

Drive-Ability
Despite the cosmetic anomalies, this car fired right up and on the test track performed nicely.

A 1977 version of the grocery getter version looking like a muscle car Nova Rally. It is in need of some TLC, at minimum a good detailing. It runs and drives well.