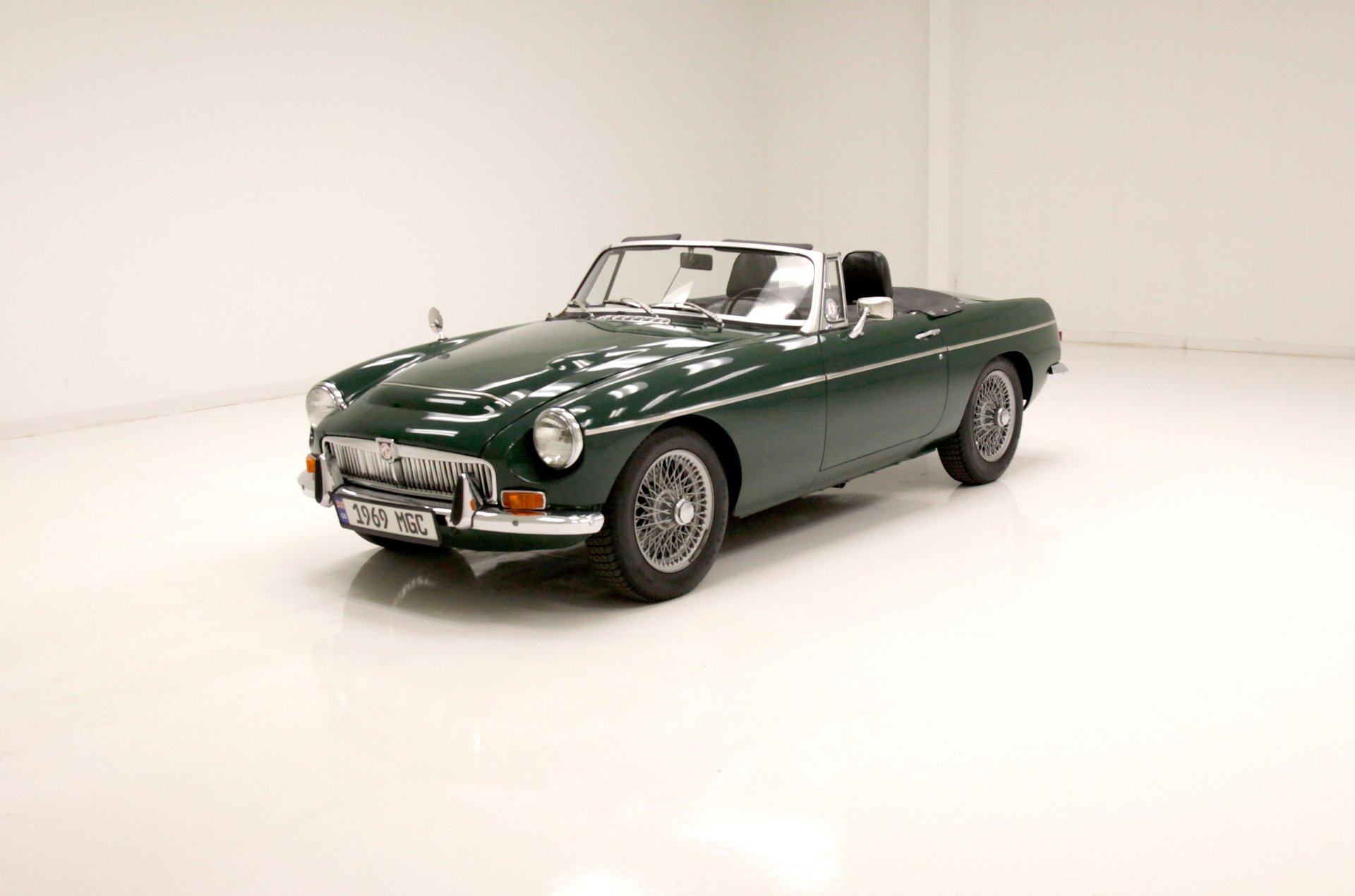 When it comes to engines, the preeminent design is the straight-six. No other powertrain is as smooth-spinning or as vibration-free as the inline six-cylinder and all because of the inherent balance of its evenly distributed power strokes. Compared to the vibrating nature of the inline-four and the lazy V-8, the straight-six is in a league all its own. Perhaps that is why many automotive engineers have long considered it the ultimate engine design.

For consignment looking like an everyday MGB only this car with a rare twist…it's a 6-cylinder and in MGC form. A mere 2,483 convertibles made it to the US shores. Mainly due to the introduction of the new TR6 and Triumph 6T-6 coupe which was stiff competition. Still though, this car has its fans due to its 6-cylinder engine, same looks as the MGB, and unitized body, as compared to the rattles of the Triumphs body on frame construction. This solid British Racing Green sports car has only 41,000 original miles and a top speed of 125MPH, which when you are in its confines, is plenty!

Exterior
This solid MGC utilizes a nice mix of chromed non 5 mph crash bumpers, a small shiny grille up front, and various attached trimmings which are all glowing and nicely preserved. British Racing Green bathes steel panels which are rust free and minding their gaps very nicely. A long trim spear runs the length of the beltline of this car on either side, and below are 15-inch Rudge type wire wheels. On top a black canvas top which spends most of its time in the down position, is a bit rumpled and will need to stay up for a bit to stretch it back out. It is in fair condition though and has a slightly yellowed rear trio of plastic windows within it. There are a few areas of tears and one that has been stitched over but it's doubtful if it retains its waterproof qualities. When down it is neatly hidden under a near perfect tonneau cover also in black canvas. Larger cathedral style taillights sit vertically on an angle on either back corner and another shiny bumper with simple vertical push bars on it frames the bottom of this car. All in excellent condition, paint presenting well, and a beautiful tone, still deep color and finish.

Interior
As a Triumph owner I've always thought the MG's were the wealthy man's sports car mainly due to their interior finishes. This car has 2 high back leather buckets with large headrests on top. The passenger seat shows some wear on the leather at the bottom of the back. These have the center hump between them, and a small plastic molded console which houses the shift lever and drink holders. Up to the dash where it is all black padded leather with neatly inset gauges with shiny bezels and a few additional black plastic knobs. An original banjo style steering wheel fronts this nicely appointed dash, and to the drivers right is a central panel with no radio just a warning light and some toggles for hazards and headlights. Black carpeting for the floors including a small storage space behind the buckets, mostly filled by the top when in the down position.

Drivetrain
Under the hood is all buttoned up and very British in its 3.0 Liter inline 6-cylinder configuration. This mill is fed by 2 SU HS6 Carbs and a 4-speed manual transmission with overdrive is on back. There is a 3.07 final drive gear in the rear axle. All is very spiffy for this engine bay with fully restored engine and bolt ons and a nicely painted BRG valve cover. Consigner stated horsepower rating is at 145.

Undercarriage
Known for their tight unibody construction and their torsion bar and leaf spring suspension for the ultimate handling, this MGC is looking good underneath. Some parts have light surface rust but certainly no invasive rust with all being structurally sound underneath. Power disc brakes are upfront, and power drums for the rear. Tube shocks are also on all 4 corners.

Drive-Ability
I just love anything British so I was the chosen one for the test drive. Here she performed very well with better than Triumph handling, a little less then Triumph power, but there is still plenty of it to produce a thrilling ride. It is a nice cruiser with the OD, and interior comfort is nice and roomy. All functions were working nicely during my test ride.

All nicely adorned in no crash bumpers just pure chrome, nice BRG paint, and those Rudge wire wheels are truly the classic look for this 6-cylinder. The top may need some attention, or simply just leave it down all the time! 41K miles, well maintained and all looking good on all aspects of this sports car from jolly old England.