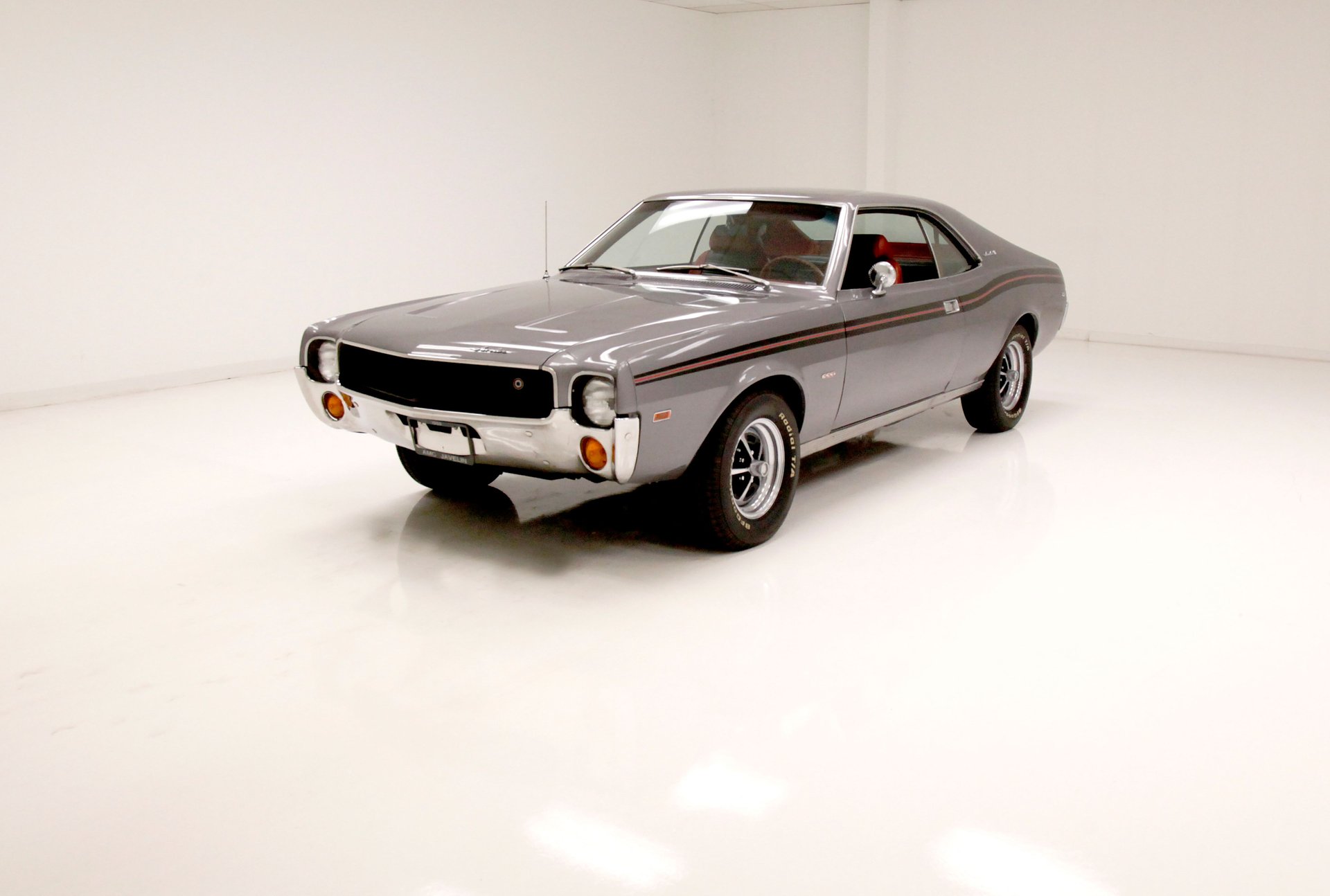 When we talk about AMC, oftentimes we just think about a failed company. The truth is though that they simply decided that we're going to build cars better even if it meant smaller profits. Because of that, they were ranked the best-engineered cars for two straight years, from 1969 to 1970. Most folks remember the Javelin. That's exactly why it's not mentioning it much. It still deserves credit though because while AMC went after the Corvette with the AMX, it didn't stop there. It decided that the Mustang shouldn't be safe either and sent the Javelin over to do battle. It often won too.

For consignment AMC's answer to the muscle car onslaught from the big three, the Javelin. This one is bathed in nice gray metallic paint, has a snazzy belt line stripe that runs the gamut of the sides and emulates the curves of the early version of the “Coke bottle design”. A fastback SST (Super Sports Touring) a 290ci V8, Magnum 500 wheels, and snappy two tone red and gray for the interior, this is the best thing to come out of Wisconsin since the cheese queen, and moved many a big three fan over to AMC, which gave a serious bid to the manufacturers power war going on.

Exterior
With its long front end and deeply raked B pillar rear deck it has taken on its iconic look and presents as such, looking all original. Straight steel panels are rust free and now bathed in Castillian Gray Metallic paint with a side stripe emulating the contour of the body in black sandwiching a thin red stripe. Chrome is very nice all around as are all the trimmings, and badging. Interesting that this car had much influence from European design even to the point that Karmann was shipped stripped down versions of this car and they were turned into Karmann Javelins. 14-inch Magnum 500 wheels are now on all 4 corners, and are wrapped by 225/70R14's.

Interior
Red vinyl panels adorn the doors with a wood appliqué panel near the front of the door which has the window crank within its field seen as we swing the doors. Inside futuristic medium high back buckets with gray tuck and roll inserts and red surrounding bolsters and a large headrest keep the driver and passenger firmly planted inside during a performance run. A center console is sweeping up on the hump, sports wood appliqué and has a Seattle Space Needle styled shifter. In the back is a 2 plus 2 bench which has more room than an afterthought. Original red dash is upfront, and sports round blackface bezel-less gauges deeply inset keeping the simplified Euro look. A wood rimmed steering wheel with 3 center spokes fronts the red dash. Also, in the center of the dash the Euro styling continues with a large wood appliqué curved vertical panel which goes up and over the dash top, has the radio speaker within it and the radio neatly inserted below. Red carpeting for the floors and a felted fuzzy headliner is above also in red. A shout out to the trunk which also presents rust free and looking just fine with a gray vinyl liner and correct center mounted spare.

Drivetrain
The original 290ci V8 is under the hood, and all looks fine and dandy with the bright metallic aqua paint on it for the block, intake manifold, and valve covers. There is a single 2-barrel carburetor atop, and a Command Shift automatic 3-speed automatic transmission on back. The rear axle comes to us with a 2.87 gear ratio. All very nicely restored under this long hood.

Undercarriage
Some minor surface rust is seen on the suspension and drivetrain parts but these remain solid. Floorpans have smooth black factory paint as do the rockers. The unibody frame remains structurally sound. Suspension is independent coil springs and leaf springs for the rear with drum brakes all around.

Drive-Ability
She fired right up, and drove swimmingly with nice acceleration, bias free braking on the panic stopping test, and good handling. Interior was very comfy, and all functions were working at the time of the test drive.

Owned and enjoyed for many years by an older gentleman then sold to our consigner who now has to sadly part with his found beauty. All the major work has been performed and you can hop in and turn the key and go eat up a Mustang!