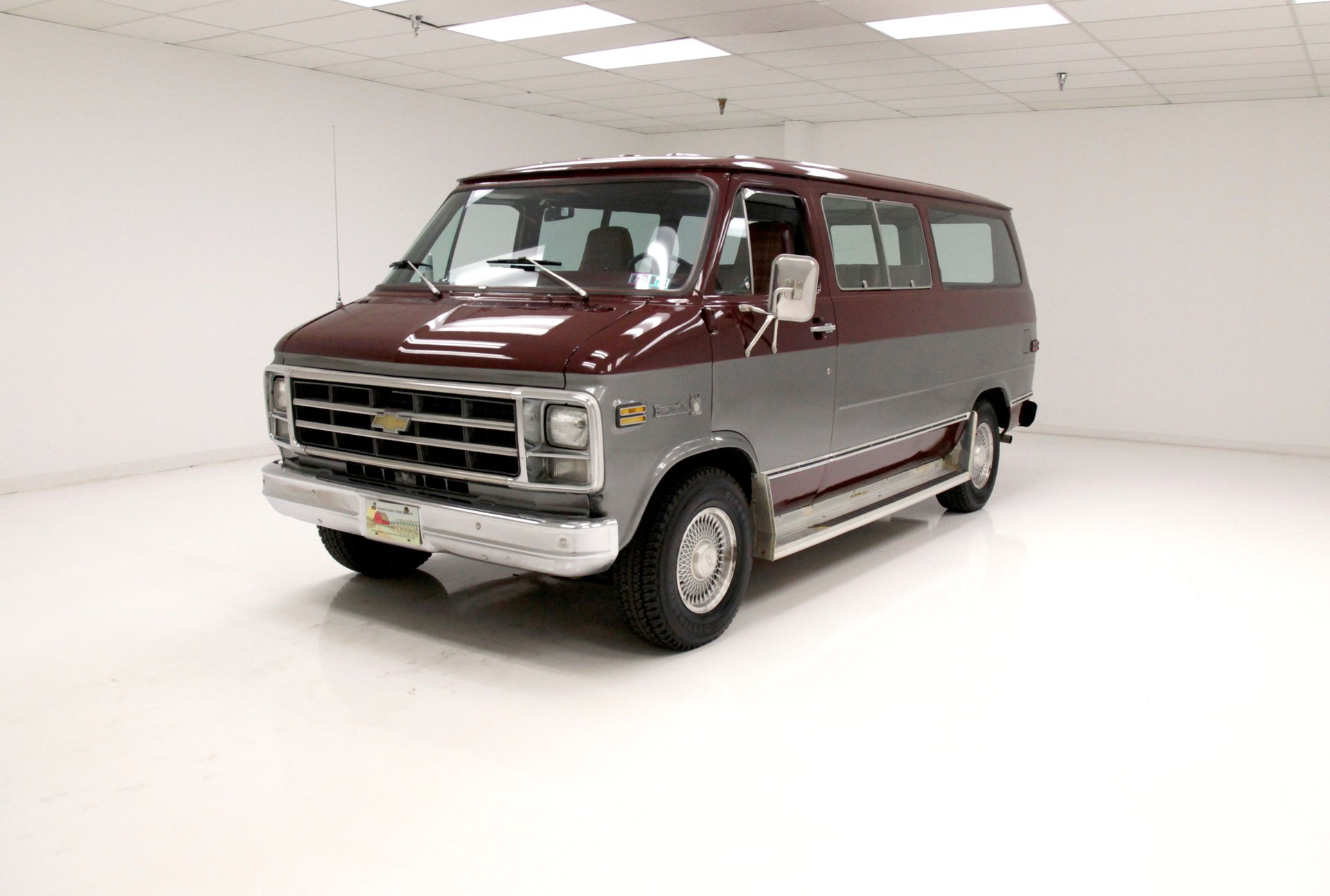 The Chevrolet Van (also known as the Chevrolet/GMC G-series vans) is a range of vans that was manufactured by General Motors from the 1964 to 1995 model years. Introduced as the successor for the rear-engine Corvair Corvan/Greenbrier, the model line also replaced the panel van configuration of the Chevrolet Suburban. The model line was sold in passenger van and cargo van configurations; cutaway van chassis served as the basis for a wide variety of vehicles. Produced across three generations, the model line was sold under a wide variety of model names under both the Chevrolet and GMC brands. Initially sold as a mid-engine vehicle (with the engine placed between the seats), the third generation was a front-engine vehicle (placing the engine forward of the driver); the second and third-generation series shared powertrain commonality with the C/K pickup truck model line.

For consignment…grab the crew and load on up into this 1979 Chevrolet G20 Beauville windowed passenger van. With the engine now fronting the driver and his passengers just a bit safer on the front-end crash scene if it were to happen. This van has current seating for 8, but an extra seat can be put in for room for 11, but it is not in this consignment's cards. Nice paint and overall good condition with a few faults, but definitely room for plenty of adventures.

Exterior
With its slightly bumped out hood and engine now upfront, the front grille protects the engine and allows for sufficient airflow through the egg crate grille and flanking single headlights, all within a chromed plastic grille face. The chrome plating is chipping off in a few sports on this grille. As we move rearward, a single door for the driver and passenger, and a sliding door allows access for the rear passengers. In back two opposed swinging doors open up for the storage area. All metal surfaces are bathed in either maroon for the upper and lower parts of the panels, or a silver which is in the center and runs from stem to stern wrapping around the center of this entire van. Paint is in good condition. Seen on either side are some shiny running boards which have some of the traction black sandy surface appliqué coming off due to wear. Bumpers and trimmings are all shiny and nice. Some 15-inch shiny fan-like woven metal pattern wheels are on all 4 corners.

Interior
Step back just a bit in time to the late 1970s where bell bottoms were on their way out, and the mullet was about to hit rural America like rotten teeth are to drinking Mt. Dew. Inside we see red wrapping most surfaces with inset panels of a red/pink/white and black plaid broadcloth for the seat inserts and door panel inserts. Some wear is showing on the seats with the cloth through to the padding on the passenger's seat, as well as the second row shows wear on the ash receptacled armrest which is covered in shiny red vinyl. The dash is red molded plastic and sports some wood appliqué inlay for the instruments and radio center panel. More large red molded plastic makes up the central console which is mostly upfront but does reach back to the front passengers for cup holders and some storage. Nice red carpeting floods all the floors and is very clean overall. A white headliner in melamine is atop and in front is a shag-a-licious carpeted upper console which houses an AudioVox 8 track player that is well used.

Drivetrain
A lift of the small front hood and we are greeted by a 350ci V8 topped with a single 4-barrel carburetor. On back is a TH350 3-speed automatic and a 10-bolt rear pumpkin. All surfaces under this hood are unrestored and have lots of patina and some surface rust on various parts, but all working just fine.

Undercarriage
Surface rust on steel particularly on the back of this vehicle where some invasive rust has taken over near each rear wheel well. Heavy surface rust back here, but framing remains structurally sound and as we move forward the surface rust subsides. Plenty of patina and road dirt seen but overall good and solid with a few minor repairs performed at earlier dates to remediate some previous rust. Independent coil springs for the front suspension, and leaf springs for the back as disc brakes are on front and power drums for the back.

Drive-Ability
A quick starter, and on the test track it did well. All functions were working, and we all got back in one piece despite our test driver! (me!)

If you have a crew and are in need of space for a few, then this consignment may be for you. Currently configured at a comfy 8 passengers it could go to 11 with the purchase of another seat, or just leave that space for their luggage. Nice two-tone paint, and a solid engine with a snazzy 1979 interior, imagine all those that can go in style at the same time!