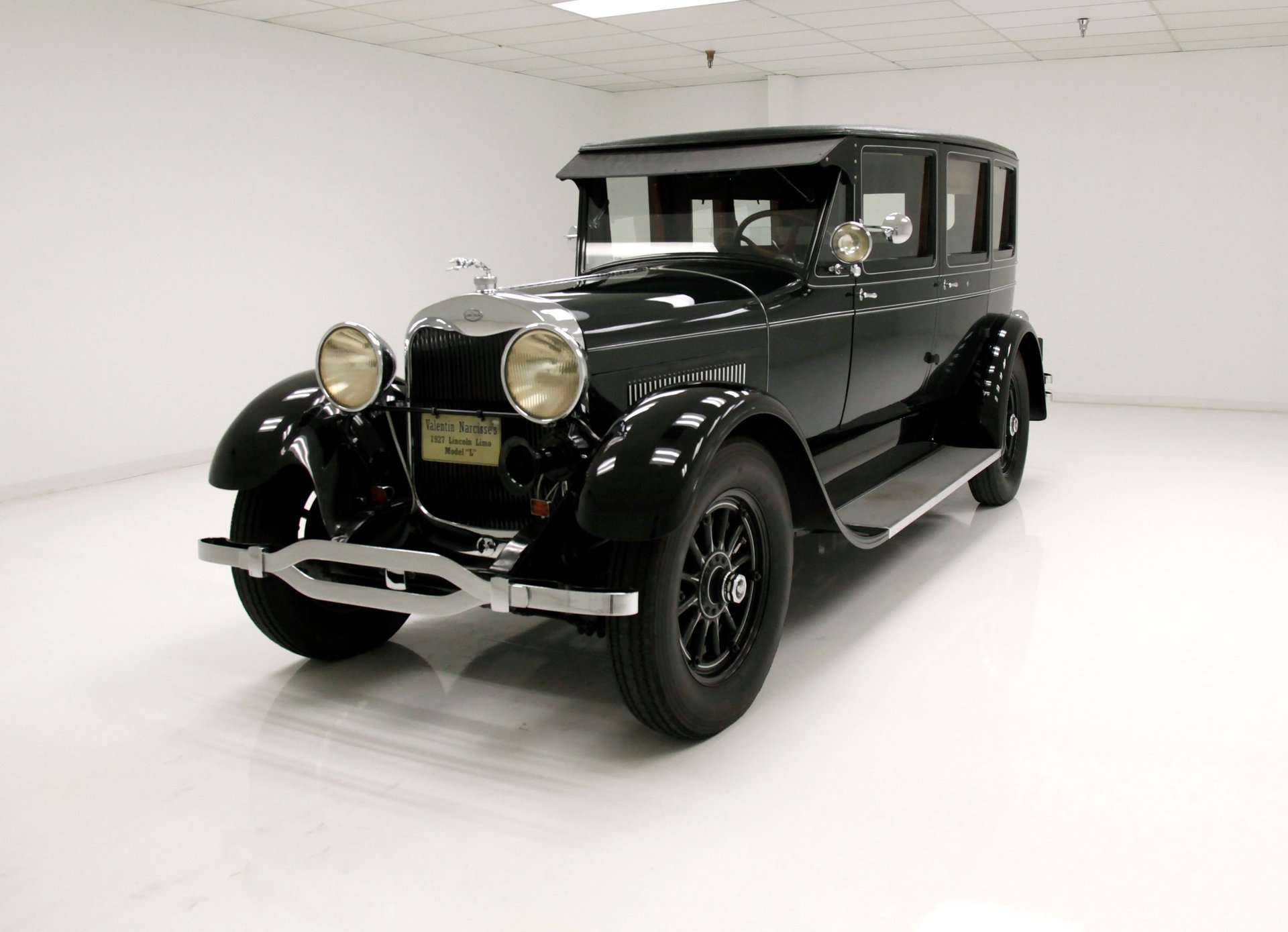 A Lincoln limousine befit a stately man of wealth and good bearing, which described Robert H. McElroy, a partner and vice-president in John D. Rockefeller's immensely profitable Standard Oil Company. McElroy's Model L seven-passenger Berline, a factory-bodied example of what he took delivery in 1927, came equipped with all the luxuries of a good life. At the time of its purchase it was the most expensive car that could be had on the market, selling for the princely sum of $5,950.00 in 1927, a full $400 more than the most expensive Rolls Royce.

For consignment a piece of history, some wonderful little known fun facts, and even a role on a hit HBO series Boardwalk Empire for this consignment. Used by Mr. Robert H. McElroy an executive in Standard Oil Company to make his way around Chicago from its purchase date in 1927, until 1938 and his passing. Mr. McElroy was coincidentally married to John D Rockefeller's daughter Edith, with whom he would eventually divorce. After his passing, the car went onto storage, put up on blocks for 23 years.

Exterior
After those 23 years, in November of 1961 a gentleman and noted Lincoln restorer Ken Pearson from Detroit acquired the car. He set about a complete dismantling, and fully restored it back to its original factory correct condition. This took him 2 years to do so, and it still retains the paint from that restoration which still is retaining its shine. All straight rust-free panels showing well minded gaps are throughout and all bathed in dark green. Opening and closing the doors are like bank vaults nice and tight with a solid thud. From its pristine front bumper to the overly large headlamps which flank a beautiful chromed radiator surround topped with an original greyhound hood ornament (we know this because this male canine ornament has all his anatomy per se, as opposed to reproductions which are gelded.) A long long cowled hood runs back to the passenger compartment complete with a visored windshield, a searchlight and all the necessary exterior hardware which still presents as new. Some hand painted pinstriping shows up on the sides, and also winds its way around the entire passenger area on the exterior. Black painted running boards with steel boards add some contrast to the green body parts. On back dual spare tires which lock on to prevent theft are flanked by a shiny split dual bar rear bumper. A note to the paint it indeed does show some age with some discoloration and marks throughout, it is noted that from the cowl forward was recently repainted, but overall shiny. 21-inch wood spoked wheels are on all 4 corners.

Interior
In 1962 Upon completion of the restoration by Mr. Pearson it went on to win the AACA Senior first prize proving the worth of the work he put into it. Over the next few years it was well maintained, seldom driven and basically stored for another 30 years upon which time HBO came calling….With a car like this it has some most unusual but even possibly necessary appointments that were on no other cars of its time. From the front stainless steel dash with its perfect gauges to the black leather wrapped bench seat and door panels, to the original wood steering wheel the Chauffeur's compartment offers up a cigar lighter, which is in extra-long form. This could be passed back to the occupants through the dividing glass. All windows have roller shades with silk rope pulls, and even a shade for the divider glass which is the ONLY car to have this option. Requested by My McElroy to offer up some privacy during his “drives” around Chicago which may or may not have included some guests of the female persuasion who were not necessarily related to Mr. McElroy! In back a beautiful gray broadcloth buttoned and tufted rear seating to include a large main rear bench with armrests, and dual jump seats which neatly fold away for extra rear legroom when not in use. A “lollipop” intercom system is attached so communication can occur between passengers and chauffeur. Also, on either door is a brass box, for the passenger side a cigarette lighter and ash receptacle, and other side a box for notes and a makeup kit and mirror, all there and original to this car. I mentioned that HBO came calling with an opportunity for this car to be used in the period series Boardwalk Empire. It was used by a particular character named Valentin Narcisse, a fictional character portrayed by Jeffrey Wright. He is a prominent and highly educated underworld figure based out of Harlem, New York and a black nationalist orator, active in Marcus Garvey's Universal Negro Improvement Association. Now the star of stage and screen!

Drivetrain
After the series completion, it went up for auction again and was purchased by our consigner who immediately set about converting the updraft carburetors which were leaky and even engineered with a pan underneath to catch the leakage and not catch on fire, but alas it did, so our consigner converted the carburetor to an AACA approved Holley downdraft version…now no chance of fire! Under the hood is a perfectly restored and recently well worked over along with the carb conversion a 5.9 liter flathead V8 which is original to this car. It is a 2-barrel Holley carburetor and has a 3-speed manual transmission on back, also original to this car. All looking very nice under the hood. And if there is a problem, an emergency toolkit, original to this car and very rarely even known about, let alone still within the car, a 36 piece toolkit, located underneath the drivers bench, and it locks with a key.

Undercarriage
Due to the restorer in 1961, and our current consignor's meticulous attention to detail and preventative maintenance, the undercarriage shows some chipping and scratching of the paint, but is a no rust environment. Leaf spring suspension for all 4 corners and mechanical drum brakes are working well. Noted is a built-in air compressor in case a tire goes a bit down in the air department. Hanging on the rear of the car is the fuel tank which contains the main supply tank and a 2 gallon reserve tank within. This can be switched from main to reserve when the main supply of fuel is exhausted by flipping a switch on the top of the tank.

Drive-Ability
This car came right to life upon a turn of the key and drove very nicely. I was able to sample some of the luxury associated with this car from the rear and ordered my chauffeur to drive me to the nearest McDonalds drive through to aid in the creation of the quintessential oxymoron. The lollipop worked swimmingly!

Recently fully serviced, it is accompanied by an archival collection that can only be described as unprecedented, including thorough documentation of the car's history and restoration, correspondence with Standard Oil regarding Mr. McElroy, hand-written maps recording journeys taken in the Lincoln, records of the shows it attended, and the trophies with which it returned home. This is an utterly fascinating car, owned since new by fascinating people who loved it.