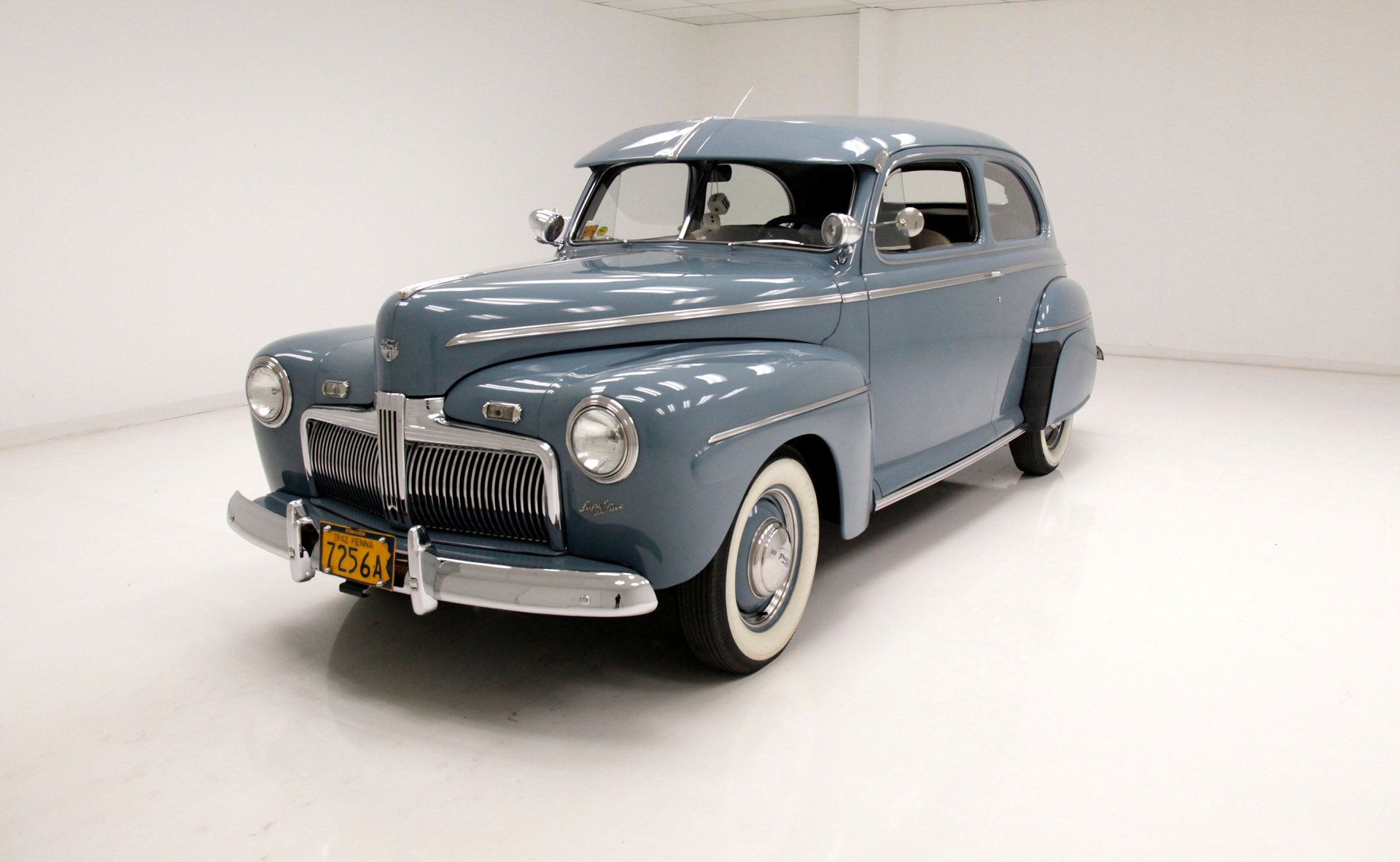 The Ford car was thoroughly updated in 1941, in preparation for a time of unpredictability surrounding World War II. The 1941 design would continue in an aborted 1942 model year and would be restarted in 1946 and produced until 1948 when the more modern 1949 Fords were ready. During the initial year of this car, it evolved considerably. The front fenders came in three pieces, the theory being that small damages could be replaced easily. During the year, it evolved into two pieces with the lower front and back sections being joined. The hood risers changed, the early ones being the same as 1940 Fords, changing during the year to the better later version.

The 1942 model year lasted only four months before the government ordered a halt to civilian automobile production starting on February 10, 1942. So for consignment, an original 1942 Pre War shutdown Super Deluxe which has gone through the restoration mill about 10 years ago, the decision was made to stick with the 6 volt system to retain originality, which this car has aplenty. An award winning head turner with a Flathead V8 nice paint and new bumpers it's a nice presentation and a pre war numbers car, which means there are not a lot of these left.

Exterior
The “electric shaver” grille, 3 part fenders for easier repairs in case of a mishap, and no running boards are just a few of the traits that came with this new design. Our example is bathed in Robin's Egg Blue, has well minded gaps, no rust and fender skirts and a metal windshield visor with searchlights. Snappy lines all curves were coming of age and this car is the definition of this design trend of the early 40's. Plenty of chrome trimmings which would be done away with during war production, (Ford solved this problem by using silver paint!), however this car has the chrome appearing in various areas like the beltline spear, rocker trim, and mid fender accenting spears. The line of the back of this car is nothing short of spectacular with its long sloping trundled and rear glass on either side for the rear passengers emulating the line of the C pillar. It just has the 40's look that has become very desirable and even hints at aerodynamic thought, although it was not a concern in 1942. All finishes are excellent and body matching wheels wrapped in wide whites and covered in the middle with the dog dish caps all chromed and we can now say Hee Haw!

Interior
With a swing of the doors we can see efforts were made to retain its original charm with light blue broadcloth in a dot pattern over gray broadcloth over gray carpeting for the door panels. Gray bakelite bezels for all the knobs and levers and shiny levers are seen. Inside we see the original chairs in a split bench for the front, and a solid bench on the rear form. Fabric is slightly soiled but presents well with light blue broadcloth with the dot pattern in lighter blue inserts and solid light blue bolsters with piping. All this floating in a sea of gray carpeting. The original chromed art deco inspired dash in gray metal and lots of chrome trimming is in front of the large steering wheel with complete circular horn ring and cloisonné Ford center badge. Nice presentation for this dash which retains its originality. A gray felted headliner is above and is nice with no stains and just a few wrinkles as we get to the bottom of the C pillar near the rear window and on edges around the doors and windows. A shout out to the trunk which has also been restored with nice finishing coverings and a like new spare tire and wheel covering.

Drivetrain
Under the long bulbous hood within the fully restored engine bay in Robins Egg Blue is a dark blue painted flat head V8 showing 221 cubes with a single 2-barrel carburetor under an original oil bath air cleaner. A 3-speed manual transmission is on back with a 3.78 rear axle installed in this model. All looking good in chromed metal hose extensions and black shiny restored bolt ons for this healthy mill.

Undercarriage
Some light surface rust on the X frame and floorpans as well as plenty of patina, but solid as a rock underneath on the structural end. We note some new components for the fuel delivery to the engine, and a glass pack style exhaust. Transverse leaf springs for the suspension are on as also are drum brakes on all 4 corners.

Drive-Ability
Just a solid car and looking great as we were off for the test drive. This car started right up and ran smoothly, great acceleration from the Flathead V8, and good cornering. Braking requires a bit of planning but overall bias free and they work! I noticed the radio was not working as well as the large clock in the round in front of the passenger side.

A head turner, nice finish and good job on the restoration of this vehicle. Pre war car just before the cut off in 1942, you will have all chromed trimmings, a Flathead V8, fender skirts and 40's design that drips aerodynamic looks. Time to back in time and enjoy the simpler things in life, all in Robin Egg Blue glory!