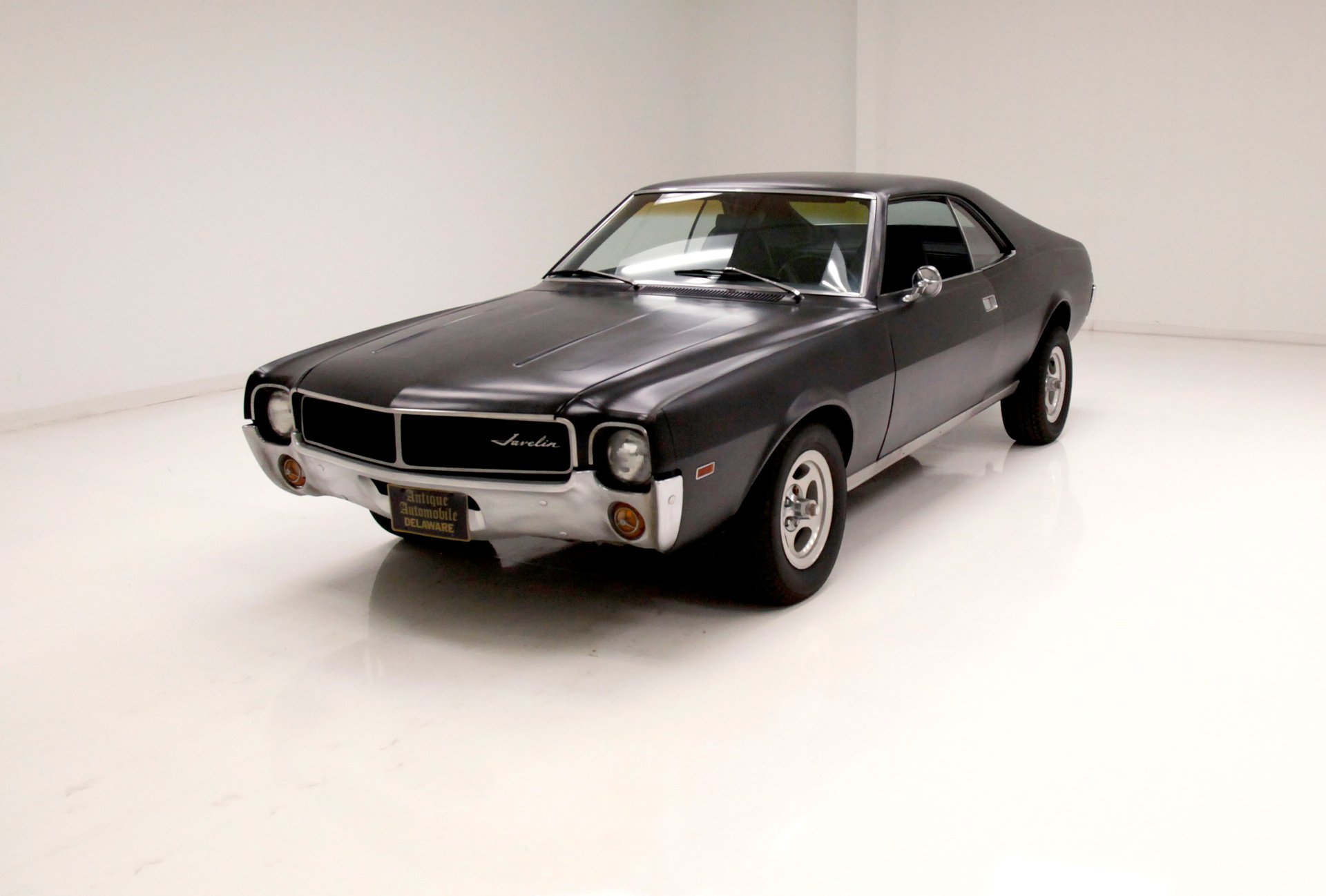 When we talk about AMC oftentimes we just think about a failed company. The truth is though that they simply decided that we're going to build cars better even if it meant smaller profits. Because of that, they were ranked the best-engineered cars for two straight years, from 1969 to 1970. Most folks remember the Javelin. That's exactly why it's not mentioning it much . It still deserves credit though because while AMC went after the Corvette with the AMX, it didn't stop there. It decided that the Mustang shouldn't be safe either and sent the Javelin over to do battle. It often won too.

For consignment, a love affair that started with a quest to buy his favorite car, the '62 Impala. Turns out it nearly tore his pocket to pay for the '62 and this Javelin was sitting next to it, so he purchased it as a work in progress. The entire body was stripped down, and any rust remediated, then painted in menacing satin hot rod black. A professional body shop owner was the previous owner so in his spare time worked this car to near perfection. It now sports a mid '70s Pontiac 400ci V8 engine and matching Pontiac TH350 transmission.

Exterior
As noted the body shop owner would pay attention to this car over the course of time when he had spare time, and totally stripped the metal down to bare, fixed any minor rust areas, saw no collisions from previous use, and then painted it in beautiful satin black. With its long front end and deeply raked B pillar rear deck it has taken on its iconic look and presents as such, looking all original. Chrome is very nice all around as are all the trimmings. A bit of a jacked up stance for the rear, which has 14 inch polished wheels wrapped in black wall rubber on all 4 corners. It is now time to go out and spear me a Mustang!

Interior
A wood appliqué arrow like structure points us toward the interior as we swing the doors. All surrounded by black vinyl with some embossing for accenting. Inside futuristic high back buckets with winged seat bolsters keep you firmly planted inside during a performance run. A center console is sweeping up through on the hump, and in back is a 2 plus 2 bench which has more room than an afterthought. Original dash is upfront, and steering wheel to match fronts it. Black carpeting for the floors and a tight headliner is above also in black. A shout out to the trunk which also presents rust free and looking just fine with a gray carpet remnant inside.

Drivetrain
Courtesy of a Pontiac, now a 400ci V8 with matching TH350 transmission is under the hood. A Rochester Quadra-jet carburetor in 4 bbl form is atop, and the original AMC 20 rear axle is still present.

Undercarriage
Some heavier surface rust is seen on the suspension and drivetrain parts, but these remain solid. Floorpans have undercoating which is chipping off but no rust seen. Rockers have some invasive rust damage mostly near the rear wheels in the front of each well, and some in the mid section. Plenty of chipped off paint and rustproofing, but the unibody remains structurally sound. Under the radiator the lower support crossmember has seen a fair amount of invasive rust. Suspension is independent coil springs and leaf springs for the rear with drum brakes all around sporting a new master cylinder.

Drive-Ability
She fired right up, and drove swimmingly with nice acceleration, bias free braking on the panic stopping test, and good handling. Interior was very comfy, and all functions were working at the time of the test drive.

Owned and enjoyed for many years with some intermittent wrenching when the mood struck him, our consigner has to sadly part with his found beauty, due to our consigner aging and not being able to enjoy it as it should be enjoyed. Most of the work has been done, leaving you with a turn key classic that can hunt down mustangs of the era.. go get 'em!