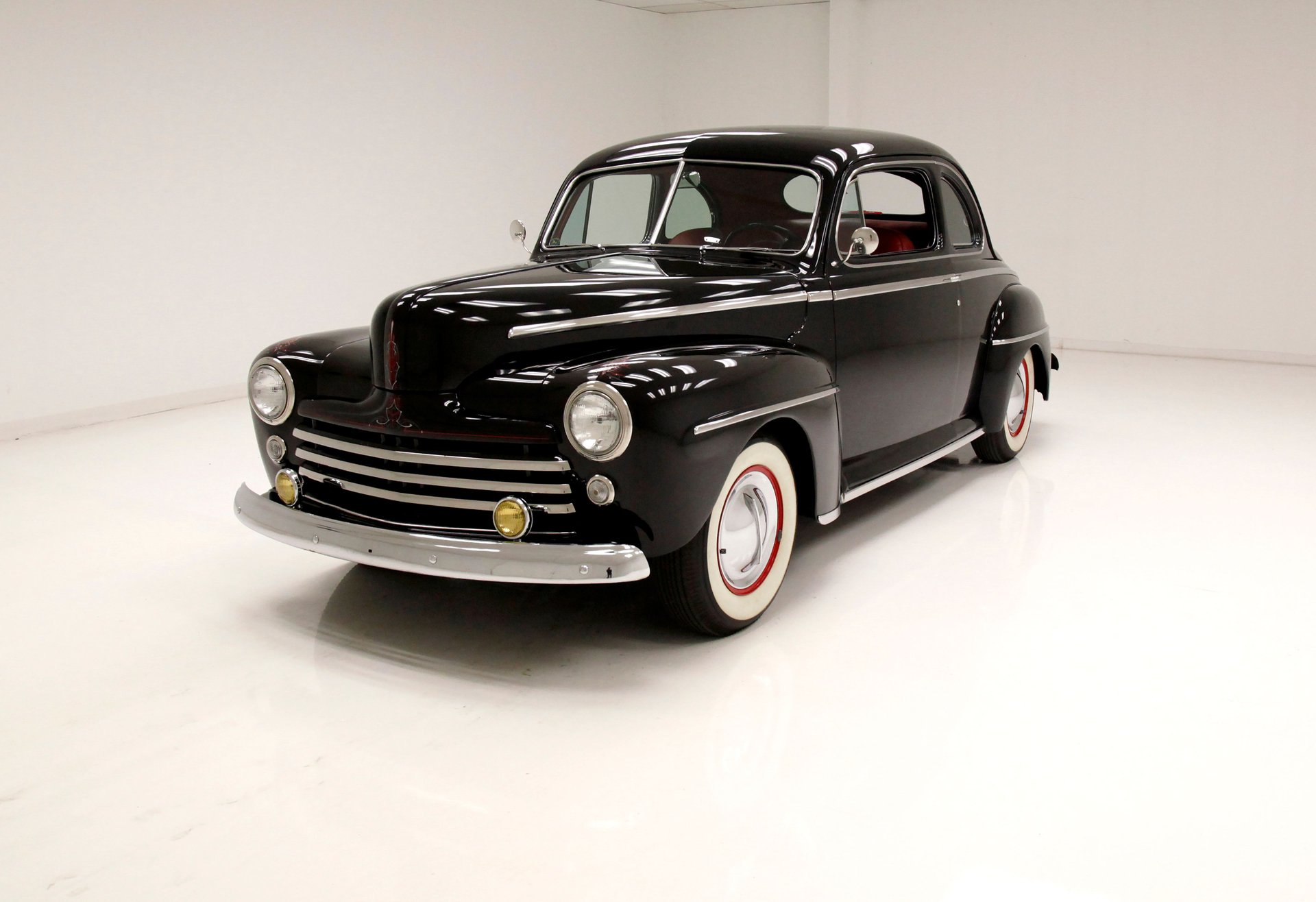 Henry Ford based his business model early on as a company that would create cars for the masses, the common man. This was the Model T, of which they made millions! Fast forward to 1947 where America was post war, prosperous and had an ever-increasing middle class. That original concept was kicked in and became the 1940's version of the car for the common man. Available in many body styles, Deluxe or Super Deluxe and with either a 6-cylinder or a Flathead V8 the possibilities were endless.

Presented for consignment, a resto-rod of sorts. Retaining most of its original lines and trim but with some engine and interior upgrades along with some pinstriping for extra charm to give it the extra bit of bling. We give you a 1947 Ford Super Deluxe Coupe, the car for the common man or a man with discerning taste.

Exterior
A deep black, chromed belt line arrows, chrome bumpers, chrome accented pontoon styled fenders, 2 door Super Deluxe coupe will live up to the phrase “fanfare for the common man”. A nice set of original fenders, on all 4 corners, a split windshield framed in chrome, and a beautifully styled grille visually tell people you are to go to the front of the parade. Wide whitewall tires mounted on red painted steel wheels and adorned with chrome hubcaps keep you rolling down the road. Also included are a pair of teardrop fender skirts for the rear. Add in some custom pinstriping done by de-wayne-connot, (DOA Flatliners), that is signed and dated on the trunk and you'll have all the bling to be the star cruising the boulevard.

Interior
Red leather tuck and roll upholstery covers the sprawling super comfortable front bench seat and twins itself on the rear bench that stretches from B pillar to B pillar. The same motif is incorporated into the doors with a peppering of chrome for the door releases, window cranks, and vent window cranks. A large black steering wheel presents with a restored and polished to the nines chrome horn ring with the FORD logo emblazoned in the center. This wheel fronts an art deco style metal dash, peppered with chrome and machined aluminum knobs. Round gauges house a red number accented speedometer and goldish numbered clock. 4 rectangular gauges also front the wheel and monitor vital engine functions. A modern heater system is mounted under the dash for those cold cruises and an AM/FM/Cassette player is mounted in the dash. Red carpet floods the floors showing nary a mark and is topped with red custom floor mats and a red vinyl headliner hangs tightly above. A shout out to the trunk which follows suit with flawless red carpeting.

Drivetrain
After opening the massive hood we are greeted with 239ci of Flathead Ford V8 beauty. All finished in corporate Ford blue and topped with a pair of 2bbl carbs it's virtual eyecandy. We note the chromed coolant tubes and a 12-volt electrical conversion done for easier starting, better lighting and a modern stereo. The consignor states that new main bearings were installed along with ARP bolts as well as a new fan pulley with sealed ball bearings. On the back is a 3-speed manual transmission that sends power to a 3.78 geared rear axle.

Undercarriage
The consignor states that the previous owner had done a frame off restoration on this car and it shows. Minor surface rust is present on sections of the frame and suspension but no invasive rust is to be seen. Dual exhaust with Cherrybomb mufflers provide the symphony of exhaust notes. Transverse leaf spring suspension is found at both the fore and aft of the car to provide a comfy ride. Drum brakes are seen all around to provide the whoa when the time arises

Drive-Ability
The car started instantly and came into an idle without any coaxing. Acceleration is sufficient and braking is as expected. This car handled our test track with ease, and it was a joy to listen to modern music all the while feeling the discerning common man. A plus on all fronts!

Henry and the design team hit a homerun with the 1947 Ford design, a car for the common man that can be modified to anyone's particular taste. You simply can't go wrong with this well sorted out cruiser that commands respect both on the boulevard and on the show field. A great piece of Ford history that will keep your common face smiling from ear to ear!

Offered at $48,500
view inventory
Thank you for your interest! We'll get back to you soon!
Speed Digital