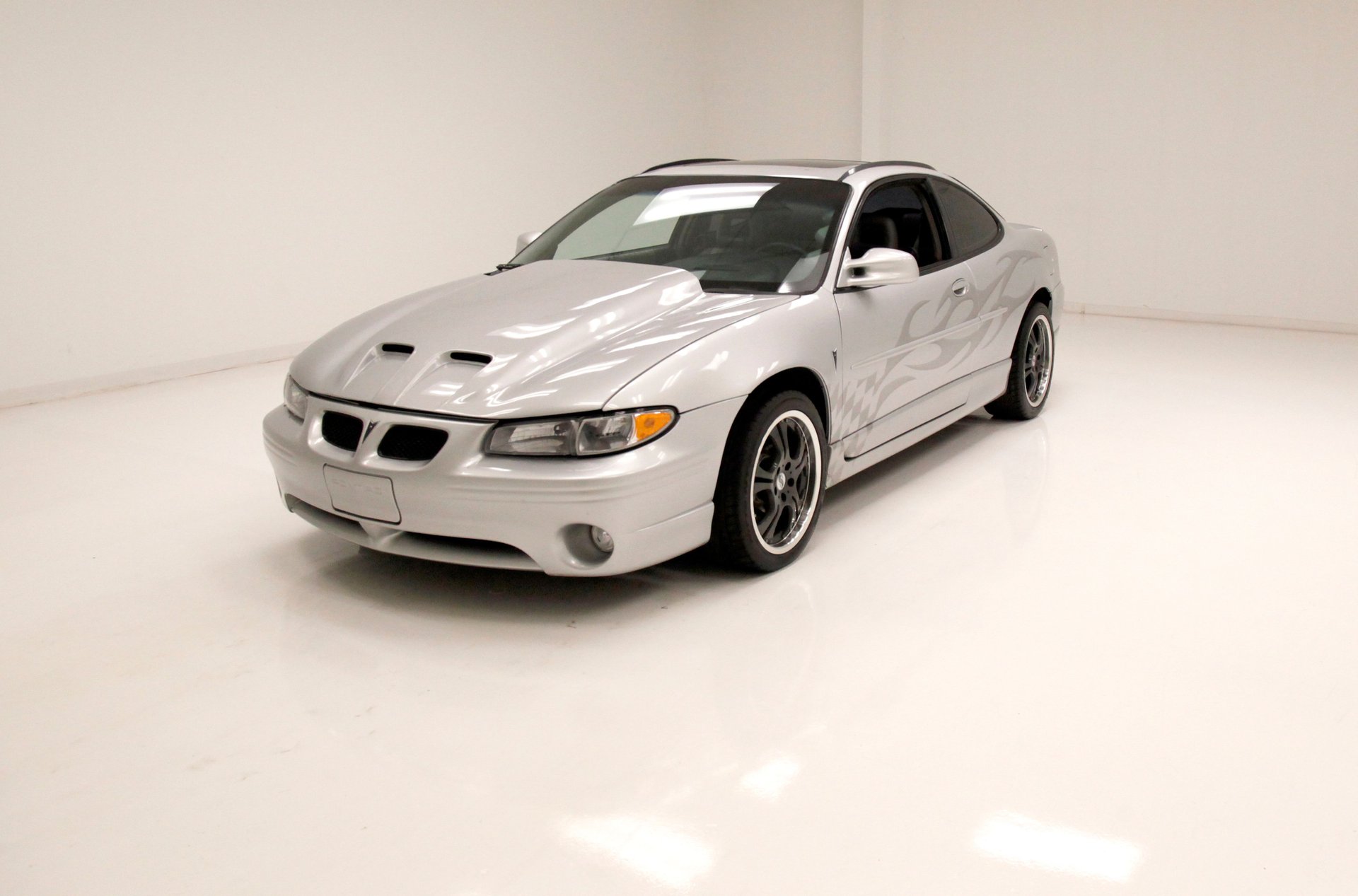 The term Grand Prix was early used for the most prominent automobile race of a country and was later used for events other than Formula One car racing, as well as for events in other sports. The first such use in organized sport was probably as the name of the French Grand Prix horse race, first run in 1863. In the present usage, Grand Prix races are literally those that apply to the World Championship of Drivers, although the term is used to describe other, less-illustrious events. More than 15 such Grand Prix events are held yearly in countries throughout the world. Grand Prix racing, automobile racing on closed highways or other courses somewhat simulating road conditions. Such racing began in 1906 and, in the second half of the 20th century, became the most popular kind of racing internationally.

Our consignment was born in Fairfax, Virginia on 10/17/2000 and is a Pontiac Grand Prix GTP Hot Wheels Edition Coupe. Sporting ghost flames, Galaxy Silver paint, low profile wheels, and a hopped up engine, along with other interior goodies, there is plenty to feast your eyes, ears, and foot on with this offering. I'm currently looking for an orange road to slice and dice on, but all I find is blacktop!

Exterior
While retaining its Pontiac Aero version of design for the 2001 GP, this car has straight panels of steel and neoprene for the bumpers, and all bathed in Galaxy Silver. Some ghost flames have been added on and these lick rearward from the front wheel well through the rear quarter. A ram air fiberglass hood has an airbrushed surprise upon opening it, emblazoned on the underside…snappy! (“They call him flipper” is a clue!). All glass and surrounding trimmings have been tinted and blackened for nice contrast to the exterior body paint. A large sunroof is on top also tinted. Out back dual exhaust pipes peek out from under the rear roll pan, and directly above is a small spoiler on top of the trunk lid. 18-inch black low profile wheels and tires are seen on all 4 corners. I'm ready for the super duper looper in full orange plastic track garb!

Interior
A swing of the doors and some snazzy tuck and roll gray vinyl with vertical stitching is on the sills and this forms to a curved door pull/power toggle housing and around the door actuators. There is also a nice large GP badge in this panel as well as a molded speaker into the plastic black lower of the panels. Inside two tone leather seats in high back bucket form, make up the front, and a 2 plus 2 arrangement is in back, stretching from B pillar to B pillar. These seats are tuck and roll gray insert leather and smooth charcoal gray bolsters with light gray headrests. Some power controls and manual controls are on these seats. A center console races through the buckets and intersects with the dash center. A very hot instrument panel with some red flames burning upward into the tachometer and speedo temp and fuel gauges is seen in orange/red. Other warning lights are also peppering this panel. Some carbon fiber accenting is going on in here too. Gray carpeting , very clean, is flooding the floors and on the driver's side are billet style metal pedals giving new meaning to “put the pedal to the metal”, now reads “put the metal pedal to the metal floor!” OH Yeah!

Drivetrain
Under the hood is the equivalent of the small house that came with the orange track, within which were 2 opposing foam wheels which would accelerate the car through the track. Under the airbrushed inside of the hood sits the “foam wheels” per se in 3.8 liters of V6 power aided by a Stage 5 supercharger. There are high flow injectors, a high flow fuel rail, and a race tunable computer with fuel mapping for your custom settings. 425 plus horses for this EFI setup and power is pushed through a 4T60E 4-speed automatic transmission. There is an intercooler for the intake and the V6 has tubular headers for easier exhaling.

Undercarriage
Suspension (4 wheel independent) is sport tuned and has been lowered and stiffened for handling. Also, some body stiffeners have been added to make the handling just a bit more on the edge. Additionally, power disc brakes are on all 4 corners. All very nice and rust free surfaces with some light patina and road dirt, but just slight on both of these.

Drive-Ability
Simply put our muscle car test track (dummy?...I say this in jest, the guy is a genius in my mind, and a legend in his!) took this car out and immediately exclaimed…”Fast and Fun! Get in, sit down, shut up, and hold on.” So, that should sum it up. No problems with any functions were reported, and all was well on the mechanical working front.

As the badge under the hood says 2001 Grand Prix Intercooled Hot Wheels Edition 422 HP (I bet there is more). Galaxy Silver paint with licking ghost flames, low profile black wheels and two tone leather interior and it's off to the plastic orange track with loop, fer sher...