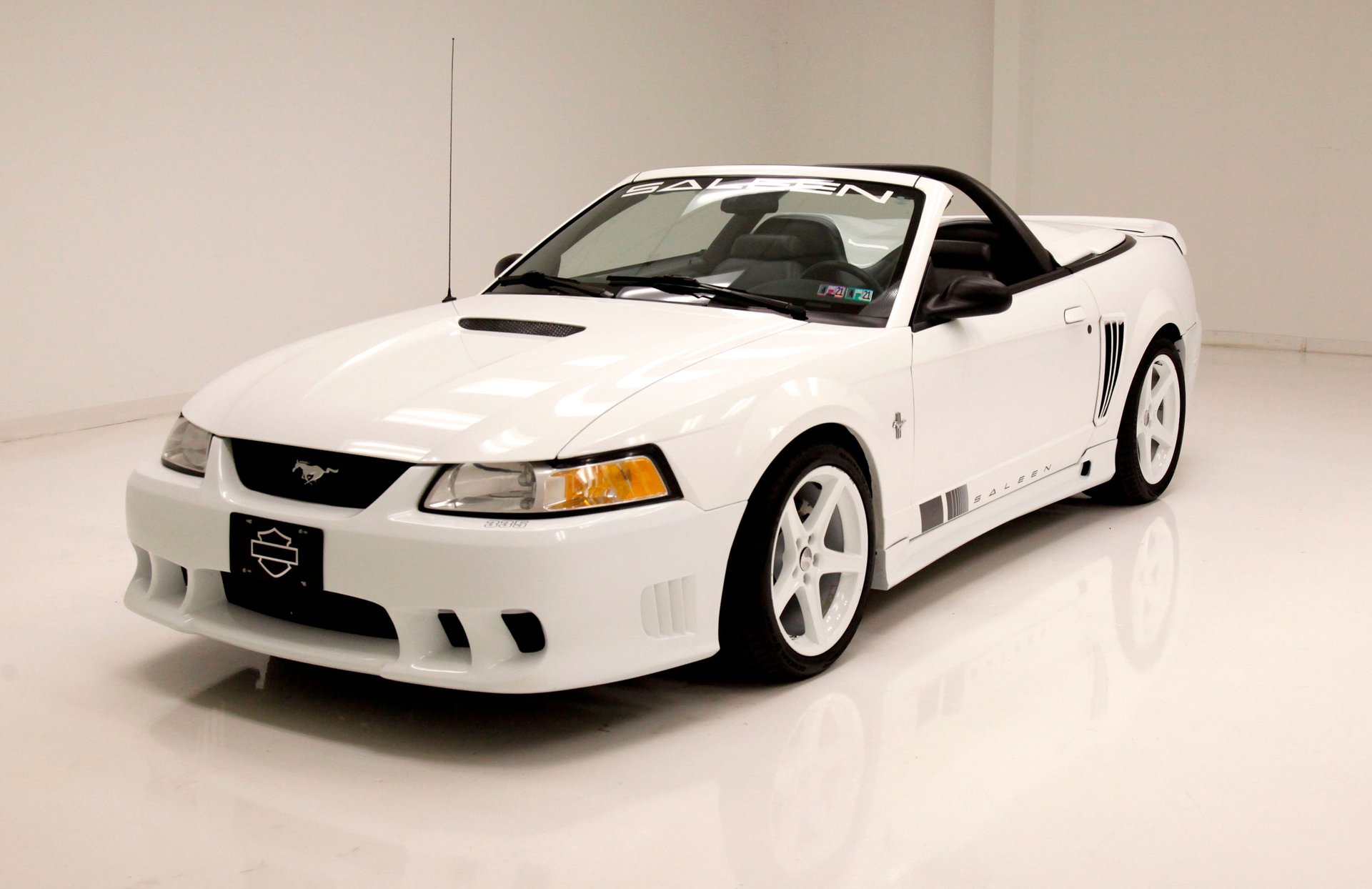 Steve Saleen is a former Formula Atlantic race car driver and founder of Saleen Automotive. He founded the company in 1983, which was originally named Saleen Autosport. Saleen Mustangs are special-edition Ford Mustangs produced by Saleen Automotive, Inc. Saleen is an American auto manufacturer that makes limited-edition, high-performance specialty vehicles. They offer heavily modified versions of mass-produced cars, such as the Mustang. Saleen Mustangs are considered to be some of the rarer Mustang models available. The first year Saleen released a Mustang, only three models were produced. According to the Saleen Club of America, Saleen produced more than 8,000 modified Mustangs from 1983 to 2009.

For consignment, a high-end Mustang for enthusiasts who were offered only one model this year from the Saleen Studios…the S-281 packing a racy 365 horsepower supercharged Ford V8. Available as a coupe or a convertible, only 974 were produced. This example is a convertible and sports a dark interior to contrast the exterior white.

Exterior
With air dams, side rocker panel flares, a molded front spoiler, rear quarter air vents and a rear spoiler this car is all bathed in Crystal White and sports black decal accenting. Also contrasting the white is a pristine condition black canvas convertible top which folds neatly into the rear trunk area covered with a solid white plastic tonneau cover with dual seat bump ups and a black styline bar. For the rear more integrated aero bumper body matching and dual exhaust peeking out from the bottom through the bumpers. A look on the side profile and a sleek swept back windshield and the smaller look for the rear trunk area with the top down, and this is a true sports car, only resembling the original look of the Mustang, but distinctly Saleen design, which is a separate company from the Ford blue oval.

Interior
A nice mixture of molded plastic, carpet and smooth integrated door actuators and power button panels, it sweeps inward and guides you to the seats. These are single high backed buckets wrapped in Charcoal Black leather with a stitched embroidered galloping horse logo in each back of the seats. Some folding and slight wear in the leather adds character and shows the car was actually used. A 2 plus 2 setup of a bucket styled bench is in back and becomes unusable when the top is down. A central console houses a glovebox, some cup holders and the shift lever, then rises to meet the dash front which has dual eyebrow curved visors for the dash top. These frame the white-faced instrument panel on the driver's side, and the glovebox on the passenger's side. In the center of the dash is a mounted bump up with boost pressure and intercooler H20 temp for the supercharger. Also seen in the center is a CD changer, and an AM/FM/Cassette/CD radio and fan and climate controls. Black carpet floods the floors and is very clean.

Drivetrain
For its healthy heart, this car now has courtesy Steve Saleen a supercharged 4.6-liter V8 that will produce 365hp. The supercharger works with EFI to feed the mill and throws power rearward to a T45 5-speed manual transmission. The engine bay is very nicely detailed, and shows no corrosion on any aluminum parts, including the top supercharger unit.

Undercarriage
Nice and clean and surface rust on some usual suspects like the driveshaft, rear pumpkin, and on some suspension parts, but nothing remarkable. Floorpans are rust free and are like new. Suspension includes independent coil overs for the front and a 4 link system with coil springs for the back. Race Craft struts, shocks, coil springs and front sway bar add up to rail like handling. Power disc brakes all around help slow the car for the ultimate cornering.

Drive-Ability
Our resident muscle car man took the wheel of this test drive, fired the car right up and off at the test track and reported that acceleration was exhilarating, braking was bias free, and the suspension lived up to its reputation with great handling. All functions were working well, and the car is a great cruiser too, when you are not muscling it around the back roads.

A fairly rare example from the new millennium, beefed up by the Saleen Company with supercharging, EFI and some snappy handling add ons. The convertible gives the car a great look when the top is down, and the tonneau cover is showing off those dual bumps on the back aligning with the seats. Black accenting helps too, and all the venting and extra cowlings give the car a really racy look, and aid in handling when you are pushing it.