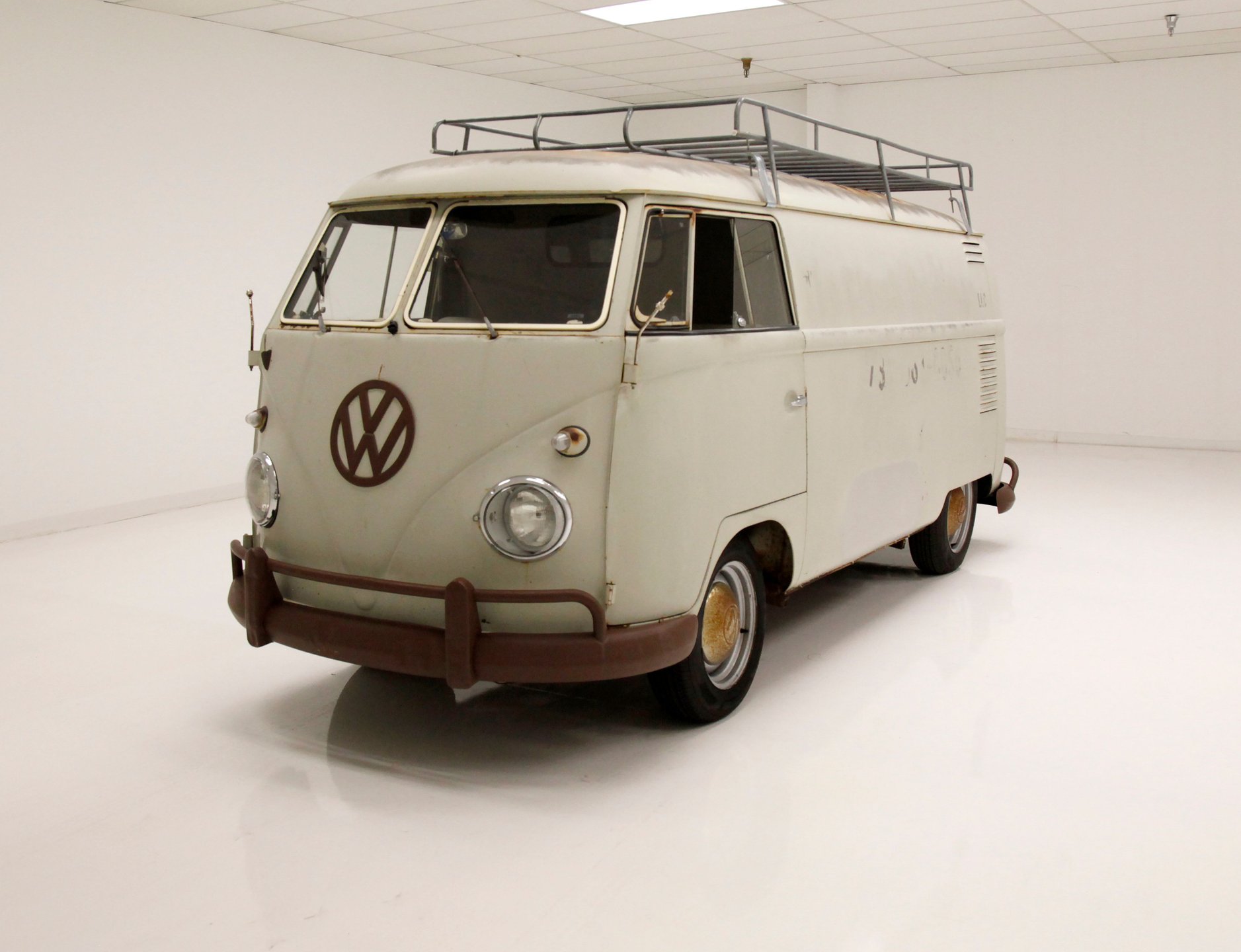 The Volkswagen Type 2, known officially (depending on body type) as the Transporter, Kombi or Microbus, or, informally, as the Bus (US) or Camper (UK), Pão de Forma (Loaf of Bread…Portugal) is a forward control light commercial vehicle introduced in 1950 by the German automaker Volkswagen as its second car model. Following – and initially deriving from – Volkswagen's first model, the Type 1 (Beetle), it was given the factory designation Type 2.

A windowless micro bus from the beginnings of the “Hippie” era, we have a consignment like no other microbus in our hallowed halls. This windowless example has a nice restored front interior, and some custom woodwork in the back inside, and retains its original paint with an aged look. Brown painted bumpers, a bit of rust, dents and dings, mere battle scars of a life lived in service to its owners. A worker bee if you will, or a diamond in the rough, rarely seen configuration, awaiting your capable hands to create something special….retro style.

Exterior
Bathed in its faded original paint of factory cream, there is plenty of wear off of the paint from the passage of time. Slight surface rust on various areas but no invasive rust on the body panels. 2 swing out doors allow side access to the interior of this windowless (save for the rear) van. A large full van, powder coated roof rack structure basically doubles the carrying capacity of this bus. This is definitely newer, is in great condition, and sits on a faded paint, surface rusted roof. Chrome trimmings have been painted over in brown, and these include both bumpers, and the VW round front badge. Surface rusted chrome moon caps are on all 4 corners.

Interior
The driver and passenger compartment which has been cordoned off from the rear interior, appears to have been restored. Gray textured molded vinyl door panels are now on, and levers have been painted white. An off-white vinyl bench stretches from door to door and is very clean with no tears or errors. In front, a resprayed dash in its original form all white painted metal with central circular instrument cluster, and near vertical black steering wheel and column. Front toe kicks are covered with more molded gray vinyl like the doors, and new ribbed black rubber flooring is now installed. Above some more of this gray vinyl and central upper mounted “console” in white hangs from the ceiling. This seems to provide some airflow into the passenger compartment up front, which is now separated by a gray panel with a small window in the center. Noted, some of the gray headliner is falling a bit on the driver's side. Swinging the dual side doors reveals a cargo area with a wood fashioned bench seat, and some built in cabinets sans doors, mounted to the side panel on the driver's side. Panels have been covered with plywood on the remaining sides, and flooring is trunk liner painted.

Drivetrain
Opening the rear engine bay, we see a like new 2100cc powerhouse rebuilt engine. This is topped with (2) 1-barrel carburetors and has a 4-speed manual Freeway Flyer Transmission now installed. A 4.125 rear axle is on and transfers power seamlessly to the rear wheels. Like new for this drivetrain with less and 1,000 total miles since its installation.

Undercarriage
Plenty of surface rust seen on the frame and rockers, and some spotting of rust on the ribbed floorpans. Only 1 area that has rust through, and that is the driver's side floorpan. Upfront we note transverse torsion bars and new disc brakes, and on back a swing arm setup with drum brakes. The exhaust exit has a small hole in it.

Drive-Ability
With the new power plant, this van fired right up, and accelerated and handled the test track with flying colors. The brakes are excellent, and all was in working condition.

Despite its aged exterior appearance, this van is structurally sound, and mechanically excellent with the new engine and transmission. New brakes, and a new front of the interior fully restored with new painted dash and gray panels, it is a work in progress, but literally some exterior attention, and you will have an excellent looking and performing rare example of the VW panel van. Dude! Pass the dutchie to the left hand side man!…and pick up that chick we just passed by with her thumb out, it's off to Haight Ashbury man.