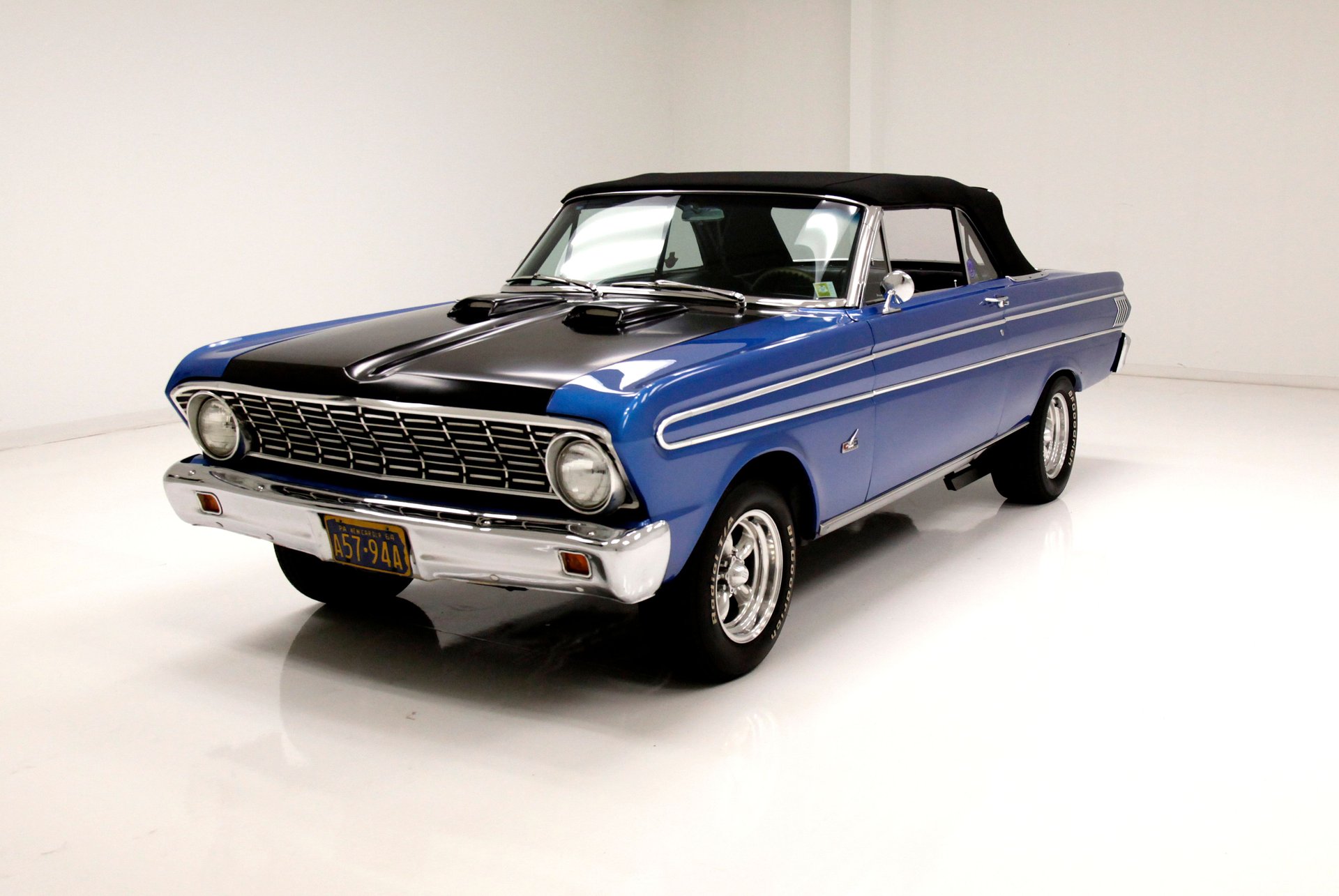 American advertising for the first Falcon in 1960 was the first time Charles Shultz's beloved Peanuts characters appeared in animated form. That's right, Shultz had Snoopy and Charlie Brown shill the Falcon. Not just in animated form either, as he did many print ads using the characters. The first animated ads appeared before the start of the Ford-sponsored “The Tennessee Ernie Ford Show”, but the advertising for Falcon began in earnest in 1961 and lasted right through until 1965. The contract with Ford ended then and Snoopy would no longer need to sell himself to line Shultz's wallet. Until a deal with MetLife insurance in 1985, that is.

Time to get serious, as we have for consignment a seriously strong motor in 347ci stroker form inserted into a beautifully restored 1964 Ford Falcon body, that is a convertible. It's no joke, when I say this car is just gorgeous, shedding its grocery getter, mom commuter, low key image for some sporty muscle that can be used on the street every day, and stand up to most any challenge…seriously.

Exterior
From its side view paperclip trim spear created by bulging metal with a trim surrounding it, ending at the rear of this car, to its original restored front grille, dual scooped hood and all the correct Falcon trimmings she's bathed in wonderful blue with a touch of black on the hood, and black canvas for the convertible top. A stainless rocker cover helps bring this car back to earth with its bottom bling, and on the rear quarter with straightened out sergeant stripes in chrome trim lean towards the tail. On its tail which uses the round jet age taillights, a nice aluminum panel for under the trunk and above the shiny bumper and Futura badge, all fins are now just a memory on this car's rear quarters. For the top it is pristine…actually its new and has a like new rear window in plastic. Consigner states new seals and well liner are added with the replacement of this top. 14 inch American Racing Torque Thrust wheels are wrapped by 205/7-R14's in front and 225/70R14's on back. A great looker that is also doubling as a real cooker (see drivetrain!).

Interior
Lowering the top reveals a wonderful interior with black Futura badged door panels which use a mix of black vinyl, and a horizontal ribbed aluminum strip right through just north of the center, running the length of the doors. Black vinyl squared off bomber style low back buckets have a small console between them, and a Hurst floor shifter. Just above hang a trio of aftermarket gauges for oil, water, and volts, and directly above that within the dash is an aftermarket AM/FM/CD stereo neatly inserted in the dash center panel. On the driver's side is the instrument cluster which is a centrally located speedometer and is flanked by a round gauge cluster on either side, shades of the Mustang to come very soon thereafter. A wood rimmed center polished rally wheel fronts this original looking dash. A black dash top and a lower black band play with the central aluminum panel, and on the bottom, we note all the pull knobs and turns for the lights, wipers, etc. Black carpet floods the floors and on the center hump sits a black fire extinguisher.

Drivetrain
Under the hood is definitely no joke with the original mill being replaced by a more serious 347ci stroker V8. Within it is a roller cam and it has Edelbrock E-Street aluminum heads. There is a single 4-barrel carb atop under a polished air cleaner cover, which is matching with the polished valve covers. On the back is a Toploader 4-speed manual transmission, which pushes power rearward to a Ford 9-inch rear axle. All wires and hoses are like new, the engine bay has been fully restored and a newer radiator is now upfront which is cool…and keeps things cool. Polished headers help with the evacuation of spent gases, and a note, shock towers are very solid.

Undercarriage
Front and rear sway bars are now on, and coil over shocks are for the front suspension. On back leaf springs and some traction bar action is also seen through the smoke. 4 piston Pony front calipers grab power disc brakes up front, and power drums are on back. A Flowmaster system takes from the headers and ends at the back of the car under the bumper. All is looking great underneath, but then again based on the topside, one would expect nothing else!

Drive-Ability
Our esteemed decoder and muscle car nut took her for the test drive, and he reported awesome acceleration, good quick braking, and a nice smooth ride. The interior functions were all good, as was all else on this car in perfect working condition.

Just a fantastic car, good power and a real looker right out of 1964. With all the restoration and improvements, you could say we are now back to the Futura, sans flux capacitor, and just raw muscle power, seriously? Absolutely no joking!