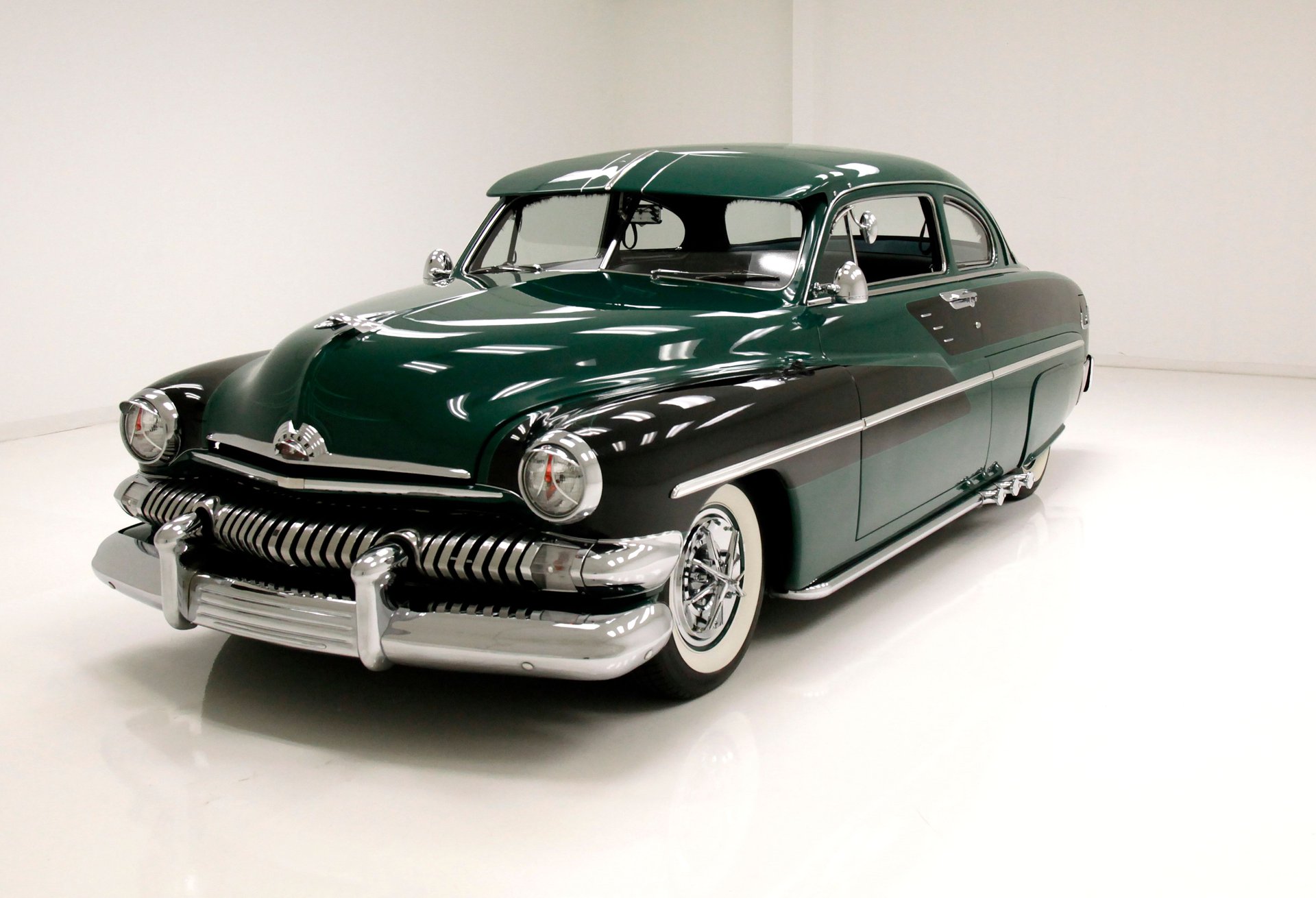 Within its era and beyond, the Mercury Eight was popular with customizers. Sam Barris built the first customized creation from a 1949 Mercury Eight; That Eight became the definitive "lead sled", much as the Ford V-8 (as the "deuce") was becoming the definitive hot rod. The Eights were among the first models to receive an aftermarket OHV engine swap, since Oldsmobile and Cadillac developed the first high-compression OHV V8 engines in 1949, whereas Ford was still using a side valve engine. Sam and George Barris also used the 1949 body style to build "the most famous custom car ever" the Hirohata Merc, for customer Bob Hirohata in 1953. Setting a style and an attitude, it had a "momentous effect" on custom car builders, appeared in several magazines at the time, and reappeared numerous times since, earning an honorable mention on Rod & Custom's "Twenty Best of All Time" list in 1991. The Eight remains a very popular subject for car modelers.

A thanks go to Sam Barris and his inspiration for the lead sled he made for Sam Hirohata which started a craze the likes of which would be an association much like the “deuce” was to hotrodders. Our consignment is the quintessential “lead sled” with its awesome “Buck Rogers Rocket” lines, two tone paint that dances with each color on various curved surfaces, big chrome teeth for the grille, and a killer side spear, lake pipes and chrome trimmings aplenty, we give you a rolling work of art. Every detail makes other cars envious not just in its size, but beautiful lines and some exaggerated features that play up the theme to the nines, this 51 Merc is eye candy times 10.

Exterior
Arriving in our first zip code is the massive 3 tier Merc grille that is polished to the nines and has teeth aplenty to grind up the competition. Flanking this big chrome is more…well chrome with rounded headlights complete with wide bezels in chrome, and chromed visors with even a custom visor made for the center badge representation of the god of merchants, transporters of goods, thieves and tricksters. This fronts a bulbous hood that has a stylized jet streaking in front and leading the way for the wonderfully large hood bathed in green paint and highlighted by some flourish pinstriping in the two-tone variation. Rounded integrated fenders with more curves than Brigitte Bardot are bathed in black which makes its way back to the large door, and changes over to green midpoint. A lower belt line trim spear works its way from front to rear, and some snappy lake pipes in chrome hang off the rockers on either side. In the next zip code is the passenger compartment roof with its metal sun visor and chromed spotlights (everyone was a policeman in 1951? ..or a “necker checker”) window surround trimmings and beautiful door handles with some extra embellishments just for sh*#s and giggles. More two-tone black begins again and runs to the rear of the car, on a rounded rear quarter, shades of Marilyn Monroe. Even the gas filler door is trimmed for extra effect. On the back are more visored tail lamps, another portrait badge ode to our god and some big chrome in the form of a bumper that wraps around the rear quarters. Rear fender skirts wide whites and on front not 1 but 2 custom mounted spinners make this creation extra badass.

Interior
As with many no expenses spared, no concept too wild the interior reflects the work put into the exterior. Here we see two tone green and black, gorgeous pulls, handles and cranks and surrounding trimmings and this is just the doors! Slipping inside our posterior is met with fresh covered benches, the front with a split back and a wonderful custom fold down center console if you will. Seats are all black vinyl tuck and roll with smooth green bolsters and some more chrome trimmings. Much like the original design the metal dash is showing in exterior matching green is all shiny mirror-like art deco inspired chrome ribbing. This is fronted by a wood rally steering wheel atop a GM tilt column, and spins power steering. A Vintage A/C heat kit has been added in, electric wipers, and power disc brakes are installed. Stereo controls are within the glovebox. In the center of a sea of black carpet rises a Lokar shifter. And a first, here at Classic Auto Mall, taking full artistic license, a hirsute headliner. Yup its black long hair and it is just over the top (of the interior!).

Drivetrain
They say cleanliness is next to godliness, and this engine bay could start another religion it is that clean. A blinged out 350ci V8 topped by a Holley 650 CFM 4 BBL carburetor, and a 700R4 tranny on back in 4-speed automatic configuration, and way back a Ford 9-inch rear with 3.55 gears, and it is all systems go! A shout out to the bay, which is covered in speckled trunk liner paint, what a great idea to intermix with all the polished add on to this mill.

Undercarriage
Very original nice patina, no rust, and plenty of new add ons. A stock independent coil sprung front suspension is on, and in back the car utilizes leaf springs. Power disc brakes are now in front and power drums for the back. A solid X frame supports all this menagerie and an H pipe exhaust courtesy Flowmaster works its way to the rear of the car where exhaust gases exit from vertical flared tips.

Drive-Ability
Sitting inside such an amazing vehicle one cannot help but put a smile on his face. She fired right up, idled with a low rumble, and took off like a rocket. All functions worked great, good brakes, nice easy steering, and a beautiful cruiser that turned more heads on our test drive than if I would have walked naked down main street...but I digress... I could not keep my hands off the headliner either!

Every now and again amidst all the classics that show themselves at our front door, one becomes a standout for its design, construction, awesome power, or just plain old uniqueness. This one covers all those bases and then some and is a most beautiful 1951 Mercury lead sled example.