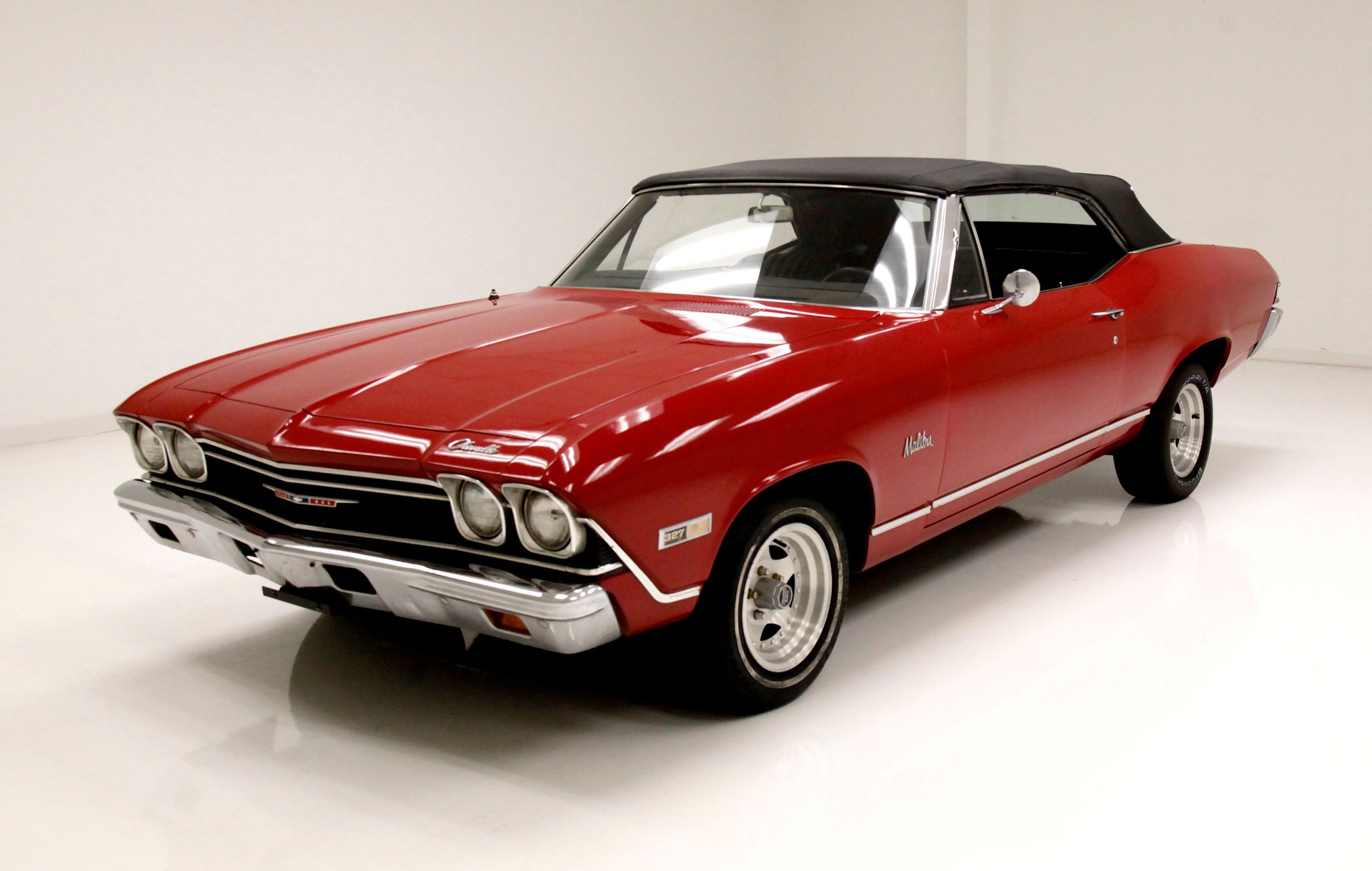 A few fun facts to start:
The Chevelle was built in 10 different plants in two countries during its 10 year run.
There was a version of the Chevelle only available in Canada that had a slightly different grille and trim. It was called the Beaumont.
1964 was the only year U.S. built Chevelles had the model listed as the first digit in the VIN.
No Chevelles originally had a woodgrain console. If you see one with a woodgrain console now, it's likely from a Monte Carlo.
The Chevelle is quite the movie star, appearing in over 1,600 shows and movies. It's had starring roles as recently as the Fast & Furious franchise.

For consignment, a 1968 version of the Chevelle Malibu. This car gives you the convertible option, plenty of chrome trimmings, a nice line, red paint, and a good interior. It arrives to you with a numbers matching 327ci V8, and a list a mile long of new parts, and upgrades put into it over the years of this consigner's ownership. Throw on a 4-barrel Holley, and an original 2-speed Powerglide transmission, and you are all set to join the “in crowd”…muscle car style.

Exterior
Utilizing the original body color, we see a respray of R1 covering the steel panels which would be red. Some faults in the panels with slight rust bubbling on the fenders particularly around the wheel wells, and rockers show previous repairs. Also, throughout there are areas of small bubbles in the paint, a few dents and dings, and some cracked body putty on the driver's rear quarter top. Plenty of chrome trim with nice badging, trim spears, lighting bezels and bumpers which show some slight fading on the lower parts of them. Body panels are straight and well aligned, but the side trimmings are slightly out of line. The black canvas convertible top is nice and has a glass rear window. Suspension appears a bit jacked up for a higher ride height, and on all 4 corners are 14-inch American Racing wheels with thin wide whites covering them up front and BF Goodrich T/A radials in the rear.

Interior
Nicely preserved door panels are on as we swing the doors to gain access to the passenger compartment. Here we see a sporty center console racing from front to rear, housing a glove box, and the jet-like throttle shaped dual post gear shift lever within a brushed aluminum panel. Low back buckets which are like new in black vinyl, have since chrome trimmings which curve around delineating the front and back panels of the buckets. In back is as equally in a nice black vinyl bench, which stretches across to each side panel with nice window cranks, ashtrays, and a trim piece. Upfront a rally style steering wheel now fronts the original dash which shows some dirt and wear. It sports square gauges and an interesting square centrally located rolling display tachometer. The original AM radio is still in, and temp controls are above. Black carpet is flooding the floors and is all in good condition.

Drivetrain
The numbers matching 327ci engine is inside, and it is unrestored, but do not be fooled it has been well maintained with well documented replacement parts put in over time. Plenty of patina and aging surfaces are all original save for the air cleaner cover which at one time was chromed but now shows a light covering of rust. Atop is a Holley 4-barrel carburetor, and on back is strapped a 2-speed automatic Powerglide transmission. A 10-bolt rear completes the drivetrain.

Undercarriage
Underneath we note various stages of surface rust, none of it being of any worry as the undercarriage and unibody, and floorpans remain sound. As noted, where the body curls around to the underside it is a bit rough on the repairs, but invasive rust free. Independent coil springs are upfront for the suspension, and a 4 link with coil springs is on back. Drum brakes are on all 4 corners and Turbo mufflers are seen.

Drive-Ability
A quick starter, nice smooth acceleration, and a smooth shifting transmission, it performed nicely on the test drive. Straight panic stopping, and good handling with no creaks or complaints from the suspension. I found the radio to be not working, but all else was functioning.

Overall a nice car with a few faults in the paint, very nice interior, original unrestored dash, original numbers matching engine, and solid undercarriage. Jacked up suspension with American Racing wheels, and you are off to the races!