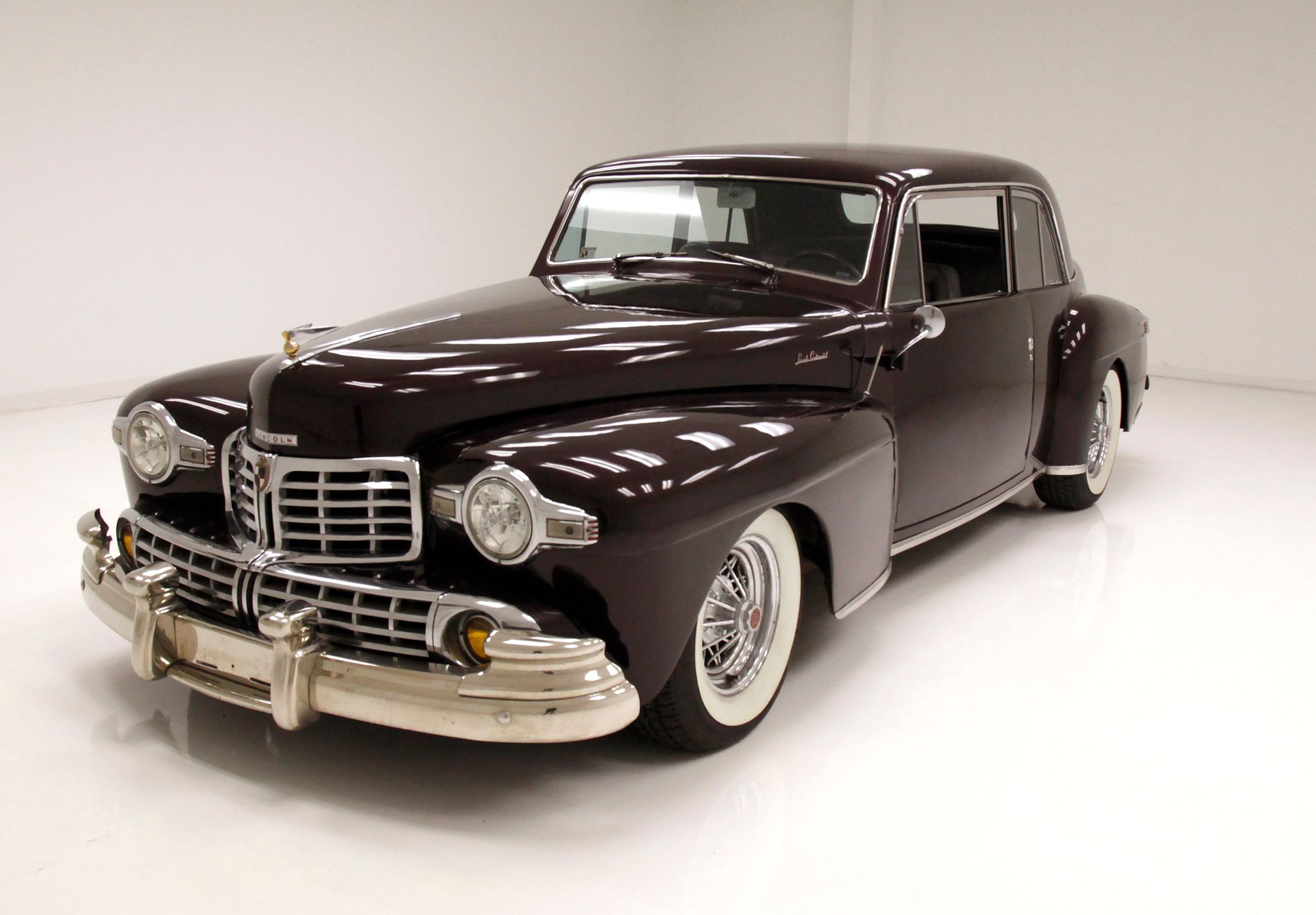 Based on the custom Lincoln built for Edsel Ford in 1938, the Lincoln Continental was introduced in 1939 and established a new standard for Ford's luxury brand. Although production ceased immediately after the attack on Pearl Harbor, the first-generation Continental returned in 1946 and remained until 1948. Since then it has been is recognized as a true classic which had Edsel Ford's hand in the beginning of its making.

For consignment, a car from an era where status was measured by the inch, and net worth was shown off by the amount of chrome that could be attached to a car. This car has both the length and the chrome, so its original owner was probably an important person, and had the scratch to back it up. Slightly rodded with a late model 350ci engine, modern seats, and Cragar wheels.

Exterior
An older respray of Lincoln Maroon covers the straight steel panels, pontoon fenders, and bathes the car everywhere other than the abundant chrome. Areas of chipping and scratches of the paint are seen. Worth the price of admission, the massive 3-tiered waterfall wrap around bumpers are reminiscent of an old musical movie set, that would have numerous dancers performing on many levels. The front bumper appears nickel plated? The grill performance is behind this massive bumper and is on 2 levels. The lower level is a wide egg crate design that wraps the bottom of the grille just above the bumper and houses big round fog lights. Above this is a smaller wrap around V style egg crate grille, that emulates the front of the hood line and has a near perfect cloisonné badge in the center. Flanking on either side are the single round headlights imbedded in the front of the pontoon fenders that have propeller like chromed trim wings protruding from either side which house turn signals and parking lighting. A large rounded bump starts at the front of the hood and has an art deco chromed sculptural hood ornament that announces the arrival of this car, although with the aforementioned grille I cannot imagine you would have missed it! Ultra-wide dual doors allow unlimited access to the luxurious passenger compartment and gaps on these doors are well minded. Bringing up the rear are more pontoon style fenders. On the back wrap around 3 tier bumpers, art deco styled taillights, a large hump backed trunk and the iconic Continental rear enclosed spare tire. Wide whites hold up the weight of this car nicely and wrap Cragar chromed spoked wheels.

Interior
Edsel Ford knew what he was doing when it came to excess, after all he grew up with it all around him, although his father was very conservative. This excess comes to fruition on the interior of this massive automobile, where we now see push button door actuators, power window toggles and stereo speakers. These rest in a field of gray tuck and roll broadcloth panels. Later model bucket seats now are inside upfront and also are in gray. On the modernized dash a few mini lights, round VDO white faced gauges, a Pioneer aftermarket AM/FM/CD player radio, and now A/C has been added. This gray painted dash is fronted by a Grant rally style steering wheel wrapped in maroon leather. In back is a large overstuffed rear bench also in gray broadcloth and this has large arms to rest upon. In the center a custom console has the buttons for the power seats driver and passenger, and a Lokar shifter in the floor. Older faded and somewhat stained carper in gray is on the floors, and a nice gray headliner is above.

Drivetrain
After getting myself and 3 of my cohorts to help me lift the massive hood (I'm being facetious), I am met with a 350ci Chevrolet engine. Some polishing is noted throughout. A 4-barrel Edelbrock carburetor is on top and on back is a 350 automatic transmission.

Undercarriage
Plenty of nicely aged patina metal is underneath. Some slight surface rust also is noted. A Mustang II front end is now on, and disc brakes have been put on the front. In back a new fuel tank, and a 10-bolt rear are now on. Frame and rockers are solid.

Drive-Ability
Hopping into this modern quasi rodder it is a slight difference from the original version. The 350 cubes fired right up, and it was off to the test track. Here it performed well with power steering and power brakes, good acceleration and a cushy cruise.

Despite its minor faults, this massive collection of steel and chrome, wrapped in art deco styling, and complete with a newer engine, front suspension, and transmission, has an air of class. Looking much like the original 48 Lincoln from the outside…within rests the soul of a rebuild for performance.