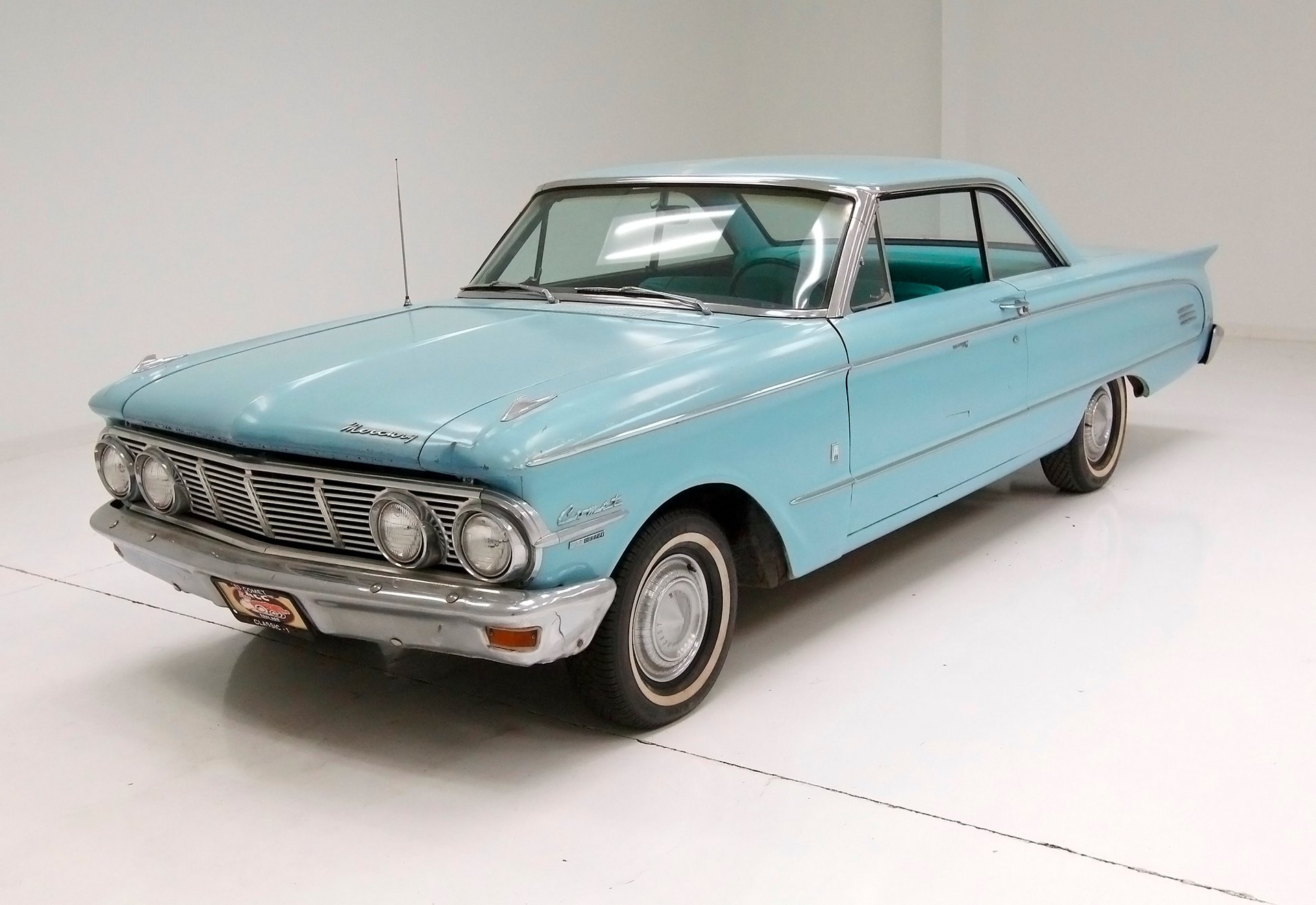 The Comet was originally planned as an Edsel model. Ford announced the end of the Edsel program on November 19, 1959. However, production of 1960 Edsel's continued until late November. The Comet was reassigned to the Lincoln-Mercury division to sell at Mercury-Comet dealerships, where it was marketed as a stand-alone product for 1960 and 1961 as the Comet without any Mercury divisional badging. The "comet" name was trademarked to Cotner-Bevington as the Comet Coach Company, building ambulance and hearse commercial vehicles. Ford bought the name in 1959.

For consignment a Mercury Comet, which is in need of some TLC. A few dents and dings some rust, and an interior that has coverings on the seats, this car needs the right owner to bring her back.

Exterior
The chrome that runs from the top of the front fender all the way down to the back of the rear fender and then down and back around to the front again is a new feature for 1963. This hardtop is painted in Peacock Blue, and as noted shows some dings and dents. Chrome is rusted and pitted, particularly on the badging and brite-work. Steel panels have consistent gaps and window trim surrounds are in good condition. In keeping up the traditional Mercury look the rear shows the “Dixie Cup” taillights and just minor fins protruding above on the rear quarters. Standard Mercury wheel covers are surrounded by medium thickness white sidewall tires.

Interior
A swing of the doors and we can see the original door panels in black and white, and the vinyl has damage as well as the interior door pulls. The seats are covered, and it is assumed that the originals underneath the covers may be damaged, however they are in black and white, matching the door panels. Dash is original and shows some corrosion and damage on trim work. The carpeting appears newer, and it is not known if this was the original color, as in back black can be seen underneath a throw that has been put in. Headliner is tight, and some rusting and corrosion is noted on the interior window trim.

Drivetrain
A 170ci Inline 6-cylinder most likely original to this car, sits in an unrestored original engine bay. It does run and is attached to a 2-speed Ford-O-Matic automatic transmission.

Undercarriage
Mostly surface rust, frame is sound, some areas of surface rust on the toe kicks, and rockers. Independent front suspension, and Leaf spring rear suspension as well as drum brakes all around are noted.

An early example of the Comet, still taking some of its styling cues from Edsel, and mixing them in with Mercury designs. Needs some TLC overall.