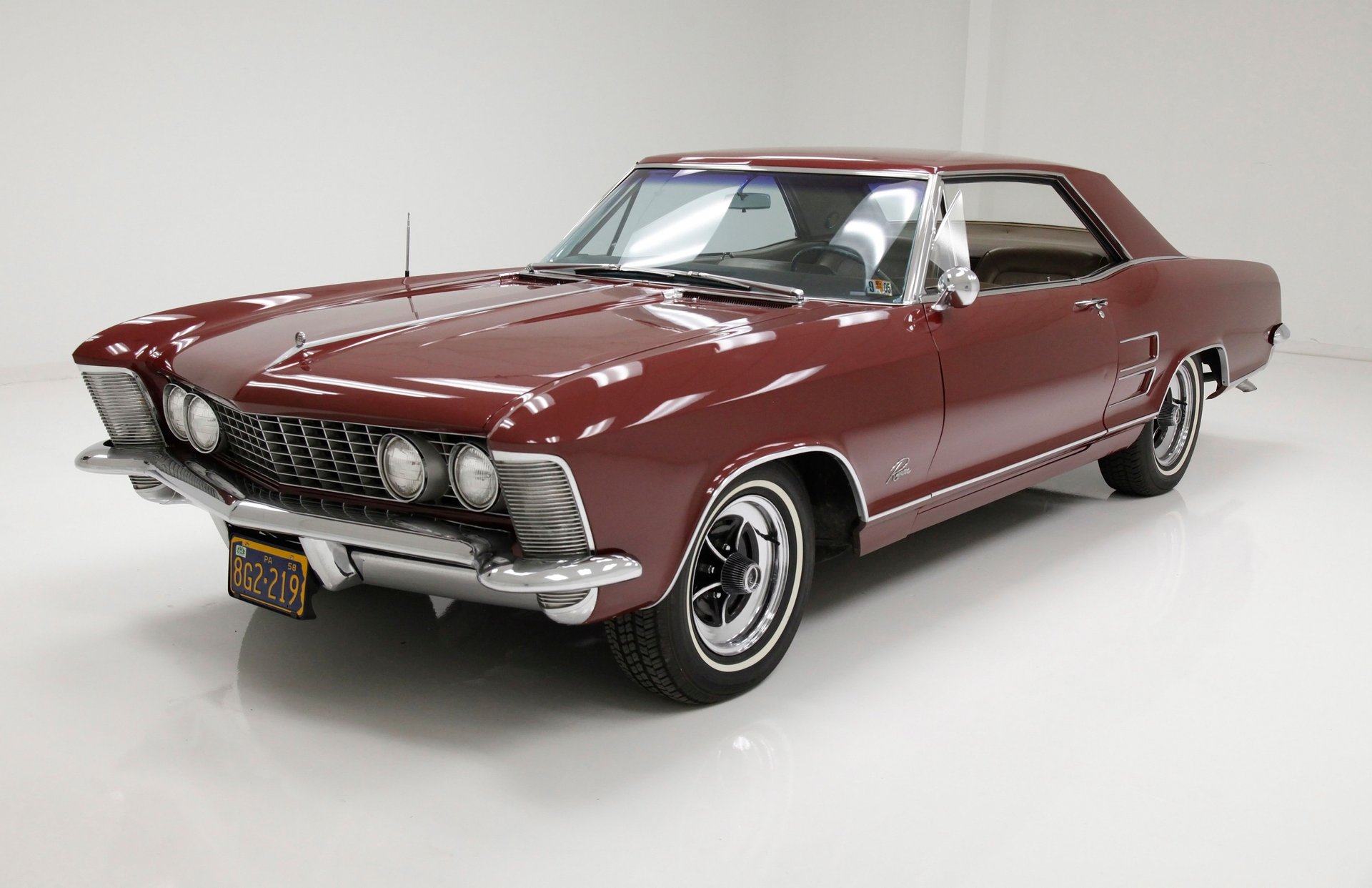 Riviera is a hallowed name in Buick history, and while it was originally applied to GM's first hardtop version of the 1949 Roadmaster--a sister car to the Cadillac Coupe de Ville and Oldsmobile 98 Holiday--it came to prominence as its own model for the 1963 model year. This new car represented General Motors' design department at the top of its game; it was a clean-sheet re-imagination of a premium Buick coupe created by stylist Ned Nickles and his team of designers and modelers, under the careful direction of vice president of design Bill Mitchell.

Our consigner bought this car in March 1966 after evaluating the new 1966 model he deemed this car a better and more classic design. It stuck because he's owned it ever since. Originally owned by the CEO of Luken's Steel it was a chauffeur driven car. Upon its purchase in '66, It became the family car until the early 1970's then it was garaged, and had a stint as the daughter's college car (what a way to arrive in style!) then garaged again. After realizing this car is something special, our consigner took a course on automobile exterior restoration and painting, and the rest is history!

Exterior
A luxury car combined with a sports car is the mantra for this 1964 Riviera. Dual headlights and those cathedral horizontal ribbed side lights raked downward and rearward in each front corner, lets everyone know it is a Riviera. All dents and dings from years of use were removed, sanded down to bare metal, then painstakingly repainted in the factory Claret Mist (metallic maroon if you will) all by the owner and his newfound education. All trimmings and chrome were stripped off prior to the respraying, and polished if needed. All beautifully preserved from bumper to bumper it is holding up fabulously. Buick rally style wheels are wrapped in thin whites, and all trimmings remain excellent. Gaps are well minded, and it's a turn the key and enjoy kind of car.

Interior
Showing in its original Fawn color way, the door panels make use of vinyl, carpet, and wood appliqué, and noted is a double door release on front and rear of the armrest to make egress easier for the rear passengers through the two doors. Power window and antenna toggles are seen on this door as well. Sliding inside we arrived in mid century modern design heaven. With leopard like design in Fawn within a white background and in broadcloth, some buttons and large tufts, the inserts are nearly perfect. A Fawn (like light gold) piping and vinyl bolsters surround the inserts. Seats show as buckets up front, and a bench in bucket format in the rear (central speaker, flat area in center). An angled dash makes use of brushed aluminum, wood grain appliqué, and chrome bezels to emulate the mid century modern motif on the dash. Diving downward on a rear facing angle, the center console is born out of the dash, and contains the radio, and airflow controls, and a storage compartment. Further down on the flat is the center mounted automatic shift lever looking much like its inspiration, of the Seattle Space Needle. Some padded Fawn vinyl tops the dash, and the bottom and the sides of the lighted center console. Light gold carpet in pristine condition covers the floors and a slightly lighter tight headliner is above all this 1960's menagerie.

Drivetrain
Under the hood is the numbers matching original slightly restored and detailed 465ci Wildcat V8 with a 4-barrel carburetor on top. All the mechanicals are wonderfully clean and well preserved, and the use of an aqua color for the block and intake cast parts of this engine are nicely showing. Belts are like new, and on back is an automatic transmission.

Drive-Ability
A great experience and I felt like a million bucks behind this wheel. You are in a rolling piece of modern art with quick starting, smooth as silk idle, and driving that is a breeze with power steering and power brakes. Cruise control worked, as did A/C, and power steering. The radio turned on but was a bit hummmmmmm. Overall, it felt like a large sports car.

A two owner example, the first owner did not drive the car, his Chauffeur did, and our second owner took it as his family car, then daughter's fill in transportation, then garaged, then educated himself to restore it. It looks like a labor of love, and a million bucks!