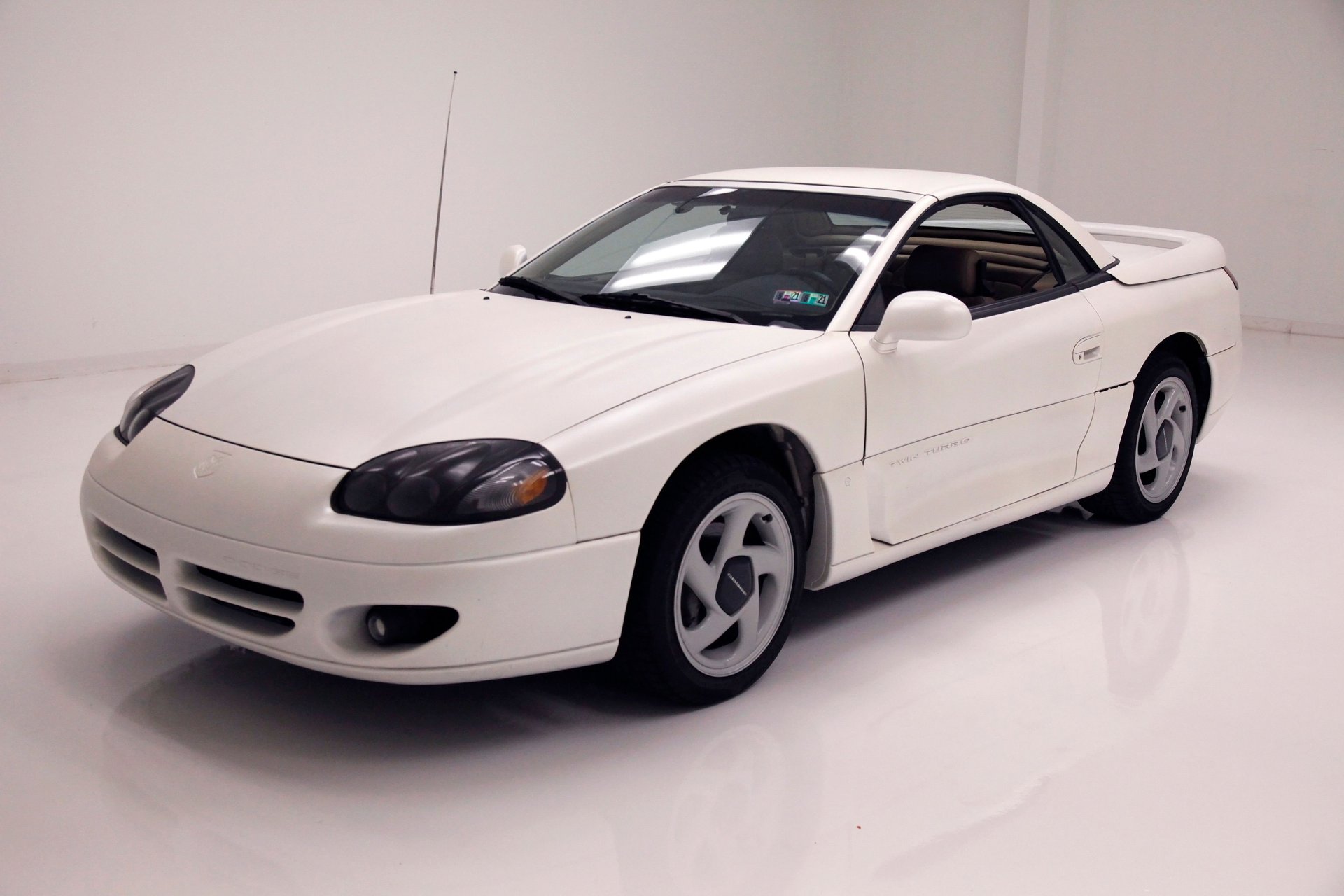 The "Three Diamonds", company symbol of Mitsubishi Heavy Industries, Ltd., originated with the symbol of the ship's flag which the company's forefather, Tsukumo Shokai, adopted when it started the shipping business. This symbol is a transformed version of the family emblem of Yataro Iwasaki, the founder of Mitsubishi, way back in 1884. "Mitsubishi" is a combination of the words mitsu and hishi. Mitsu means three. Hishi means water chestnut, and Japanese have used the word for a long time to denote a rhombus or diamond shape. Japanese often bend the "h" sound to a "b" sound when it occurs in the middle of a word. Now you know more about the Logo!

A non-factory collaboration between Mitsubishi and Dodge, this Stealth/Spyder was a custom fabrication which resulted in a parts car being hit in the driveway, and now the two cars were put together and we offer for consignment a one of a kind 1996 Dodge Stealth R/T Spyder TT with a nifty retractable hardtop. Mechanically, the Dodge Stealth and Mitsubishi 3000GT are exactly the same. At the time these cars were sold in the United States (1991-1996), Dodge and Mitsubishi had a working relationship that allowed Dodge to sell a rebranded version of the Mitsubishi 3000GT with slightly altered body panels. After Dodge discontinued the Stealth in 1996, Mitsubishi continued with the 3000GT in the United States until 1999. So, while the Mitsubishi 3000GT models included the Base, SL and VR-4, the Dodge Stealth equivalent was the Base, ES, RT and RT/TT. The Dodge Stealth RT/TT is the turbo version of the Stealth, which is mechanically the same as the Mitsubishi 3000GT VR-4. Same engine, same drivetrain, same capability, same speed. We offer the 290hp Twin Turbo version with retractable hardtop. Please note this car has a reconstructed title.

Exterior
This car is a white pearl spray wrap giving it the appearance of the Red Bull/Aston Martin F-1 cars with their “matte” finish, only this car is in white. Smooth bulbous panels cover the car and gaps are well minded. A dark screening covers the head and taillights giving the car a more menacing look. Noted the paint on the top and bottom of the car are slightly different. All window trimmings are in black and add a nice contrast to the white body. The highlight of the exterior is the electric retracting hardtop, which opens the trunk first, then the top magically goes into that space, and it finishes off with a finale of the trunk closing on the entire folded neatly hardtop and rear glass. An amazing feat to watch. White pearl paint is a little thin in areas below the belt line, but no rust is showing. Turbine style wheels also in gray matte finish format, are on all 4 corners. As you will notice the car is badged as a Dodge Stealth R/T.

Interior
Tan coverings mixes nicely with black accenting on the doors which have power toggles for the windows. Manual locks are seen. Inside the passenger compartment a black covered curved design dash fronts the original steering wheel. The instrument cluster has the tachometer and speedometer along with numerous warning lights. In the center is a trio fo molded in dash gauges, A/C and fan controls with a nifty small screen with graphics to denote where the air is coming from. Just below is an AM/FM/Cassette player with a 7-slider equalizer built in. A central console races rearward, presents in all black, and houses the shifter, top controls, a handbrake and a power mirror control. Dual leather covered buckets showing wear on the bolsters flank this center console, and these can be adjusted with power switches on the sides of the seats. a small 2+2 rear bench in nice condition is in back, however offers up a small rear passenger space for any potential extras going along for the ride. Tan carpet which its fairly clean and stain free covers the floors.

Drivetrain
A 3.0 V6 Twin Turbo is under the hood and shows clean and mostly corrosion free. The Turbos remain very strong. A 6-speed manual transmission is on back. Consigner states the timing chain was replaced at 96K (showing 123K now).

Undercarriage
Some slight surface rust, extra grease and light oiling are seen throughout. Floorpans are clean and have a coating of rustproofing. Also noted are four-wheel drive, four-wheel steering, active aerodynamics, electronically adjustable suspension, four-wheel anti-lock brakes, and tunable exhaust. Save for ABS, these are all cutting-edge options today, let alone nearly 30 years ago.

Drive-Ability
I slipped into this car, top down in the warm weather of the day and fired it up. It started effortlessly, and I roared to the test track. Here I was treated to dual turbo performance with lightning quick acceleration, awesome handling, and a comfortable ride even at cruise speed. Plenty of power at your foot tip, and the transmission shifted effortlessly, although I had to have the clutch firmly on the floor to shift without a grind, and it is at the bitter end of the pedal that the tranny kicks in. All functions were working swimmingly.

Twin turbos on a 6-cylinder engine, and I would be spending time at the gas stations with my heavy foot, but I just could not get enough of the snappy acceleration. The power top is a fascinating feat of engineering and convenience, and the matte paint in pearl white grew on me. A solid driver, nicely maintained, and I would never fear the salvage title, as it was simply due to a driver's side door that could not be found, so the consigner fabricated one! Insurance companies…go figure!