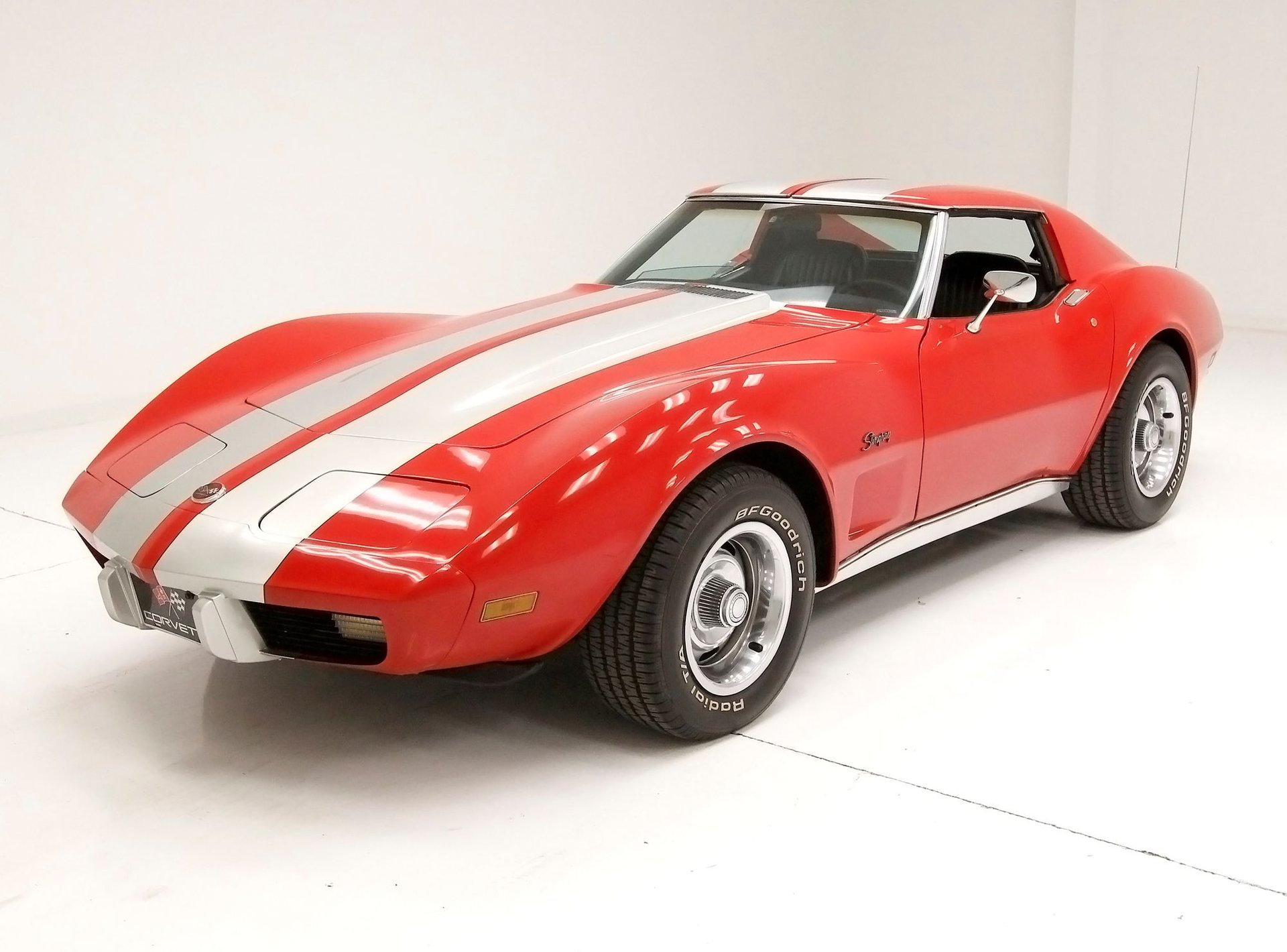 By 1976, the United States economy was on the mend from the 1973–1975 global economic recession. The recession, which had been caused in part by the 1973 oil crisis, had caused gas prices to soar which, in turn, had made automotive manufacturers begin re-evaluating the types of vehicles they were manufacturing. Over 540,000 third generation Corvettes were built between 1968 and 1982 making the C3 generation the most production Corvette ever and the most popular for the collector.

The would be the last year, since its 1968 inception where a C3 generation car would have the Sting Ray moniker on its body. Maintaining the classic Sting Ray shape, although much smoother styling with its undulating hood, and rounded rear, this consignment has been well maintained with many recent fixes and rebuilds. With a little TLC on the interior, this will present as a great example for the windswept version of the Sting Ray.

Exterior
Excellent Red with contrasting Silver stripes coats the fiberglass on this garage kept curvaceous example. The iconic Sting Ray “gills” if you will vent cool air into the engine bay from directly south of the front wheel wells. Brite work is minimal but in good condition. New headlight relays are installed, and headlights flip up and down when the switch is flipped. A pristine stainless molding on both rockers adds a nice highlight and protects the rockers. Deep dish rims, and standard Corvette wheel covers are on all 4 corners.

Interior
As noted, black on black with vinyl buckets showing some cracking which reveals foam, and wear. Door panels showing some wear as well, and carpeting has slight wear. A repainted center console replaced chrome dash bezels, and a new speedometer (with cables) and a quartz clock are seen on the dash. Also noted a replaced arm rest “T” cushion, and a new heater control face plate (which needs adjustment).

Drivetrain
The 350ci V8 with fresh gaskets, (oil pan, valve cover, and intake) a rebuilt 4-barrel carburetor, and alternator, is bolted to an L48 block with Turbo Hydramatic 3-speed automatic transmission, that has also received new gaskets and seals. For a visual kick, “chromed” valve covers, master cylinder cover, and air cleaner have been added

Undercarriage
A mostly rust free (if seen surface rust only!) underside that has new brakes all around, new tires, suspension bushings, a new dual exhaust with catalytic converters removed, and new front shocks are noted.

The last 3,000 miles have seen some major replacements, and upgrades to fix existing problems. An exterior with beautiful paint, racing stripes in silver metallic, and great wheel covers, have this car looking like the wind, and moves like it as well.