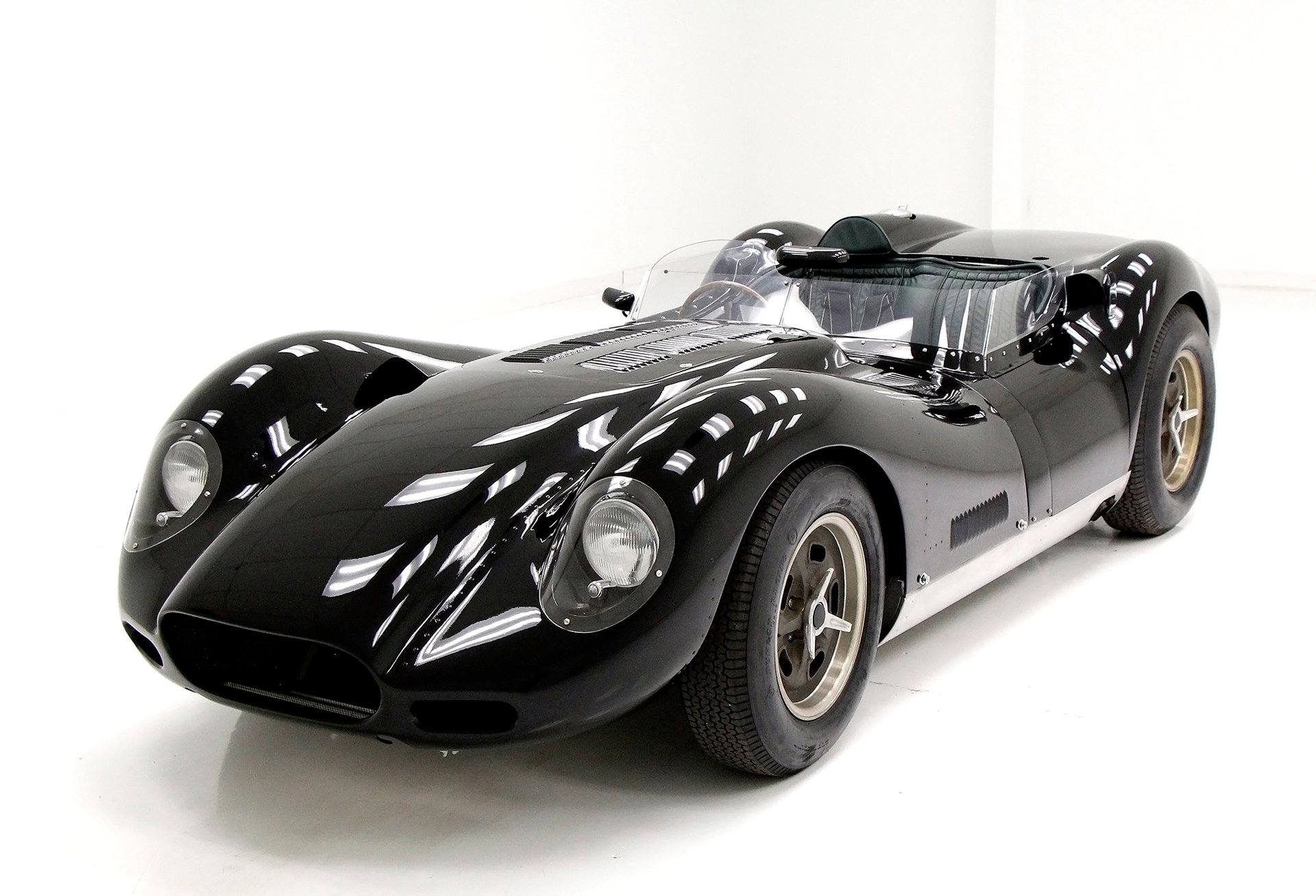 The Jaguar D-Type sports racer was a very dominate machine due to its excellent performance and handling characteristics. As such, there was a strong demand from Jaguar to continue to produce sports cars. In 1957 a fire at a factory and Jaguar's withdrawal from racing saw the production of the D-Type come to a close. As a result, others stepped in to produce racers based on Jaguar components. One of the more successful of these creations was designed and built by Brian Lister. His first racers came on the scene in 1954 and often competed against stiff competition such as the Aston Martins and Jaguar D-Types. Archie Scott-Brown was one of the more memorable drivers who piloted the Lister built machines to many podium finishes and dominated the British racing car scene in 1957, winning 11 out of the 14 races. The 1957 Lister/Jaguar machine was constructed of a light-weight steel space frame chassis and bodied in an aluminum body. Its body was lump and thus it was given the nickname 'Knobbly'. Development continued throughout the years with a total of seventeen examples being created with most going to the United States. The first two examples were built for the legendary American sportsman, Briggs Cunningham. Seven examples were delivered to Jim Hall and Carrol Shelby who outfitted them with Chevrolet power-plants.

As the story goes BHL 113 was purchased by Leroy Edwards in the 70's at an automotive swap meet near Dallas Texas. It sold to Mark Davies (UK) and shipping papers show BHL113 was shipped from Houston Texas to the UK on February 22,2013. Metallurgical testing which used samples from this chassis and 2 other documented chassis from the original 17 produced, verified that the metals matched in contents thus, providing supporting evidence, BHL113 is a valid chassis. There have been rumored stories floating around about Brian Lister being superstitious and avoided the use of the number 13, however these are unverified.


Exterior
Noted collector Terry Larson from Mesa, Arizona was the coordinator of this build, where a new company has in their possession the original bucks from the Lister Company. At this location a new body was painstaking pounded out of thin aluminum just as the race cars were in 1957-58. This new body was then shipped back to Terry Larson where it was finished off in a beautiful black gloss, and received the remaining treatment including mating correct magnesium wheels with Dunlop Racing 600 tires in the front and 650's on the rear.

Interior
The current owner/consigner requested that the interior be fitted with a bit more luxury that what the race car would have been, so a fine grade of racing green padded leather adorns most of the open right hand drive cockpit. A chronometric tachometer, and various other knobs switches and small gauges sit within a black dash. This is fronted by a billet style lightweight steering wheel which is finished off in walnut wood. A tripod permanent mounted center mirror sits atop the dash and helps with vibration dampening when viewing what's aft within the mirror.

Drivetrain
Famed engine builder Bill Terry could not salvage the original engine block which was the victim of a thrown rod, and a new block was used. However, the original Cunningham twin plug wide angle head, was used after being carefully machined. This head sports wider valve openings, and dual plug cylinders to ensure the burning of as much mixture as possible on each stroke. A comfortable 5-speed transmission has been mated with this racing power plant and is noted that this combination can run very nicely at lower RPM. Testing reveals that this slightly de-tuned version will produce 340HP.

Undercarriage
The lightweight steel space frame chassis is pristine. Various other racing innovations can be seen such as inboard rear disc brakes, and adjustable chassis, standard disc brakes in front, and riveted aluminum sheeting for the majority of the undercarriage to help with aerodynamic efficiency. Also noted is the use of all braided stainless steel tubing for oil and hydraulic brakes, and low tech wood used as fill at various locations underneath.

This beautiful example which is FIA Approved, and has its Heritage Sticker (original block has been retained) and is definitely built to be a driver. The consigner states that a 1,000 mile shakedown through the mountains of Montana was driven when the car was finished, and there were no problems (except for hoping the Dunlops would grab in the corners!). An interesting story, and some real maneuvers were gone through to put BHL 113 back on the road/track, and back to life. A lack of any racing heritage brings the value lower than its 16 other counterparts, however the attention to detail, and keeping with the original spirit, is out there for the Jaguar collector or Lister aficionado at a very fair price.


Classic Auto Mall is a 336,000-square foot classic and special interest automobile showroom, featuring over 300 vehicles for sale with showroom space for up to 1,000 vehicles. Also, a 400 vehicle barn find collection is on display.
This vehicle is in our showroom in Morgantown, Pennsylvania, conveniently located just 1-hour west of Philadelphia on the I-76 Pennsylvania Turnpike. The website is www.classicautomall.com and our phone number is (888) 227-0914. Please contact us anytime for more information or to come see the vehicle in person.