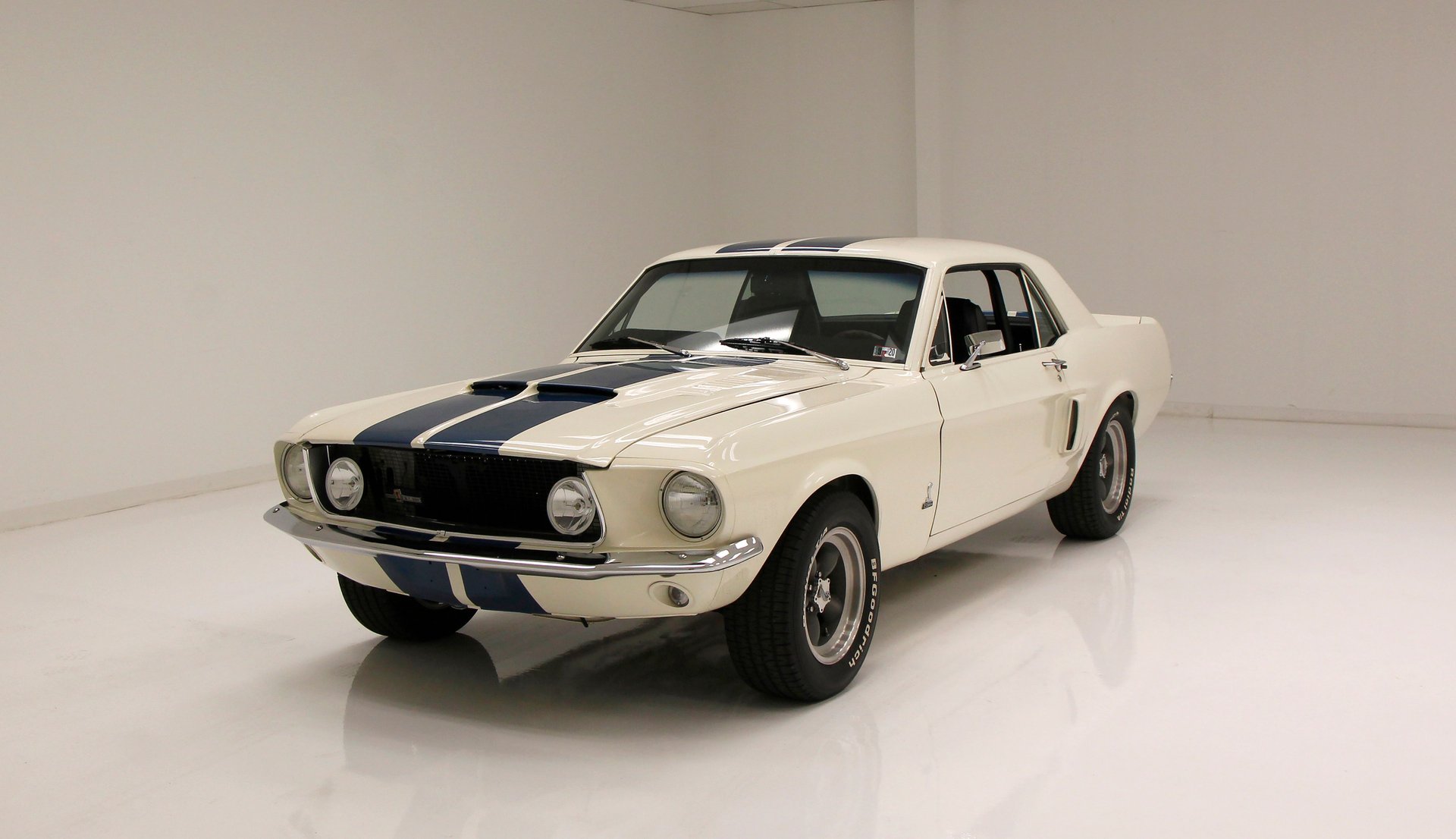 Ford's General Division Manager was about to introduce the world to the first Ford Mustang, and he knew he had a hit on his hands. Although badged with horses, the new model was named for the World War II fighter plane and Ford sold more than 400,000 the first year, sending other automakers scrambling to conceive competition. The Mustang was such a smash it catapulted Lee Iacocca to the Presidency of Ford later that year.

For consignment a 1967 Mustang now GT500 race car clone. When purchased in 2011, it was a race car, actually raced in the SCCA. However, in 2015 the consigner started the process of “domestication” so it could be driven on the street. The transformation of the original 1967 Mustang to the GT500 was one that was very thorough even down to the Shelby brake coolers actually functional through the cowls seen on the rear quarters. A calmer cam was put in, and other modifications to make this car street legal. Still looking like an original 1967 GT500, and the consigner would know, as he also owns an original!

Exterior
With the original conversion from everyday Mustang to GT500 version it became a frame off restoration. Now we see the benefit of that with laser straight steel panels, well minded gaps, and very nice Wimbledon White paint. A few mods were the addition of a Shelby fiberglass hood, the fog lights within the grille, the Shelby brake coolers on the rear quarter actually working and hooked up, and Vintage American Racing mag wheels all around wrapped by BF Goodrich racing radials. Lest I forget the painted dual blue stripes race through the center of the car, and on the rocker is another stripe with the GT500 emblazoned badging. All there and ready to tear up the street, and anyone who dares to come near you. Also noted is the rear plastic spoiler with airflow to help keep the car on the ground and make it a bit faster due to less drag.

Interior
The first thing you will notice upon opening the door is the roll bar very nicely fabricated and welded securely into the passenger compartment. The original seating is all gone, and now just 2 high back buckets in black vinyl remain. In back the rear seat has been removed and the area is carpeted in dark gray. Up front to the dash, which is fronted by a Shelby steering wheel, now presents in a black upper dash, and a white lower dash. A few extra small gauges have been added to the cluster, and original gauges have been replaced with AutoMeter gauges. Below the dual eye-browed dash top, in the area where the radio would have been, an extra gauge, a toggle switch, and a kill button replace the radio. A Hurst shifter is now mounted in the hump, which that hump and the floors are flooded with nice black carpet, very clean. Up top, a smooth vinyl headliner near perfect hangs tightly. A shout to the trunk where a new coating to texture paint has been sprayed, and the spare is housed here as well as a shutoff switched battery box, and the fuses for the car.

Drivetrain
Under the hood is a gorgeous 351ci Windsor V8 with GT40 heads, polished valve covers, and air cleaner cover. MSD provides the high voltage ignition, and an Edelbrock 4-barrel carb, and intake manifold feed the fuel and air. On back is a 4-speed manual top loader transmission (by Borg Warner). All this produces a consigner stated 530hp which can be proven by a backup Dyno report. A 9-inch Ford rear, and 3.55 gear ratio complete the rear axle.

Undercarriage
Underneath is wonderfully pristine with shiny white frame, floorpans and toe kicks. All structurally solid and working together with a Global West suspension in the form of independent coil springs upfront, and leaf springs on the back. A stainless H pipe Flowmaster exhaust works its way from the headers to the back of the car and is very clean. 4-wheel disc brakes are noted.

Drive-Ability
Our seasoned race car test driver took the wheel of this car, and he reported it is very much like a 1967 original GT500. Plenty of power, great handling, and stopping, and even a nice but loud cruise. Acceleration was very good, and he did notice the transmission was a little noisy in the 1,2 & 3 gears, which he surmised due to the angle cut of the gears.

A very good clone of the '67 GT500 which are worth some serious dough for an original version, and one that you may even hesitate to drive due to that inherent value. So, pick this driver/racer, all buttoned up with all the features of the original GT500, frame off restoration and upgrade. SCCA racing history now street tamed, and a real head turner for the Mustang aficionado.