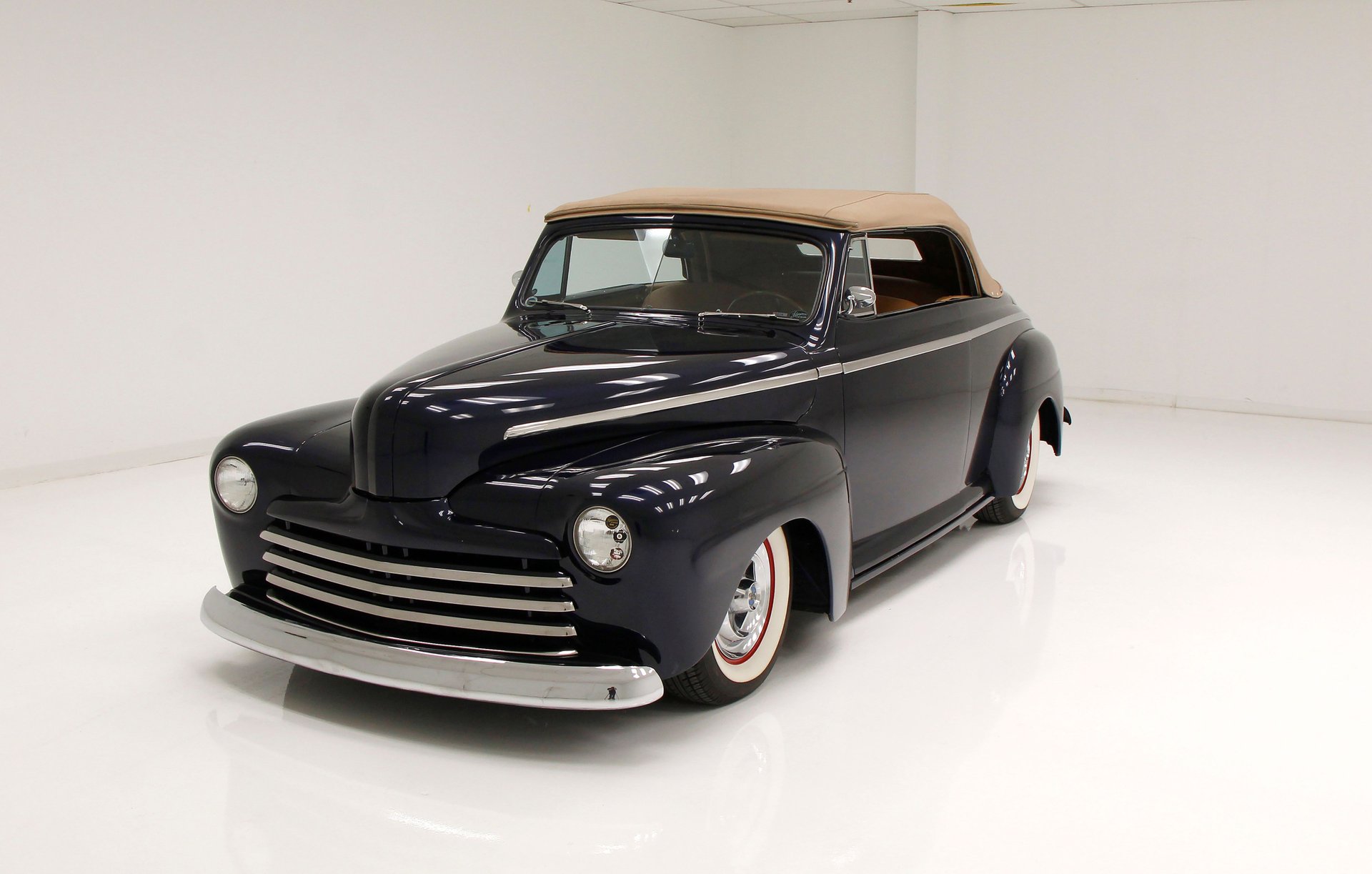 Cruising is a social activity that primarily consists of driving a car. Cruising can be an expression of the freedom of possessing a driver's license. Cruising is distinguished from regular driving by the social and recreational nature of the activity, which is characterized by an impulsively random, often aimless course. A popular route (or "strip") is often the focus of cruising. "Cruise nights" are evenings during which cars drive slowly. A cruise can be a meeting of car enthusiasts at a predetermined location, organized predominantly through the internet (in recent times) but also largely through mobile phone, word of mouth or simply by a cruise being established enough that it becomes a regular event.

For consignment a customized for cruising 1947 Ford Super Deluxe. A 350ci crate engine from Summit, a rebuilt 200R4 OD transmission, and a 3.70 Dana rear, this all metal cruiser skates on Diamondback white wall radials, fronted by 15-inch Lancer hub caps. The car has been nosed, decked, and has frenched in the old-style headlights. Add in a chopped convertible top, and you are living large 1940s style, and a car really like no other Super Deluxe…super duper!

Exterior
If you're blue and you don't know where to go to…Why don't you go where fashion sits….Puttin' on the Ritz. And blue it is, actually all steel rounded “phat” fat bulbous fenders and nosed hood, curved doors and rounded off trunk all bathed in Midnight Blue Metallic (where else have I seen that midnight blue color...Insert quarter/turn knob…??!) Anyway, I digress, as a wonderfully undulating trim spear on either sides waves and curves its way from the front hood through the doors and to the rear quarters. Oval taillights peer out from these quarters, and with the lower curved shiny mirror-like rear bumper, frame the rounded trunk lid. Dual chromed tipped exhaust jut out proudly from underneath all this menagerie and sound off when getting goosie with your boot. Up front all simplified with frenched headlights which have inset turn signals, a simplified horizontal chromed bar grille, and another curved bumper way below. Like a rounded geological uprising, the nosed hood grows out of the front grille, and then makes its way rearward to the chopped windshield. Atop is a nicely preserved custom chopped Haartz tan canvas convertible, for that wind in your hair sense of freedom as you rumble down the blue highways of rural America.

Interior
Two tone material of leather and cloth inserts in tan color, wrap these original 1947 seats. A split bench upfront, and a long luxurious bench on the rear all floating in a sea of gold carpeting. The door panels utilize the same fabric and leather and form themselves to compliment the seats. Upfront a lot of work here with fabricating the dash which is from a 1950 Ford, and '50 gauges and glovebox. It has been melted together to create a metallic blue and chrome curvaceous work of art that is fully functional. Below this dash is a molded plastic bar with A/C vents, and power outlets for charging all your technology. Just an artistic sculpted beautiful job on this fully custom interior.

Drivetrain
Flipping the trimmed hood, we see a multitude of gray mechanical parts coming together to form a Summit 350ci 290hp V8. A rebuilt (in 2018) 200 R4 transmission with overdrive is strapped on to the rear of the 350. A 3.70 geared axle is on back.

Undercarriage
The beneficiary of having the entire body taken off, no stones were left unturned on this undercarriage. We see a steel drilled X frame reinforcement with original floor tubs and the original blasted 1947 Ford frame now painted tan. Mustang II provides the disc brake front suspension which has been molded into the original framework up front. Underneath the running boards are buttons for the door actuating opening mechanism.

Drive-Ability
She fires up with a stunning roar, and off it was to the test track. It has ample acceleration, good handling and braking, but it's the cruise that is most impressive. Whether low and slow or a trip down the highway this car handles both with ease, and with overdrive saves some fills for later wasting by laying rubber!

A very nicely done work of automotive art. Interpreted as a low hot rod cruiser which has been tastefully done, all custom on the exterior and interior, and now with a 2018 engine and transmission which has been rebuilt and slapped on the back. Also, during those hotter months, put the top down and enjoy the sunshine and the wind as it blows carefree through your hair. On that famous thoroughfare, with their noses in the air. High hats and narrow collars, White spats and lots of dollars, spending every dime, for a wonderful time…Super duper! (deluxe at least!)