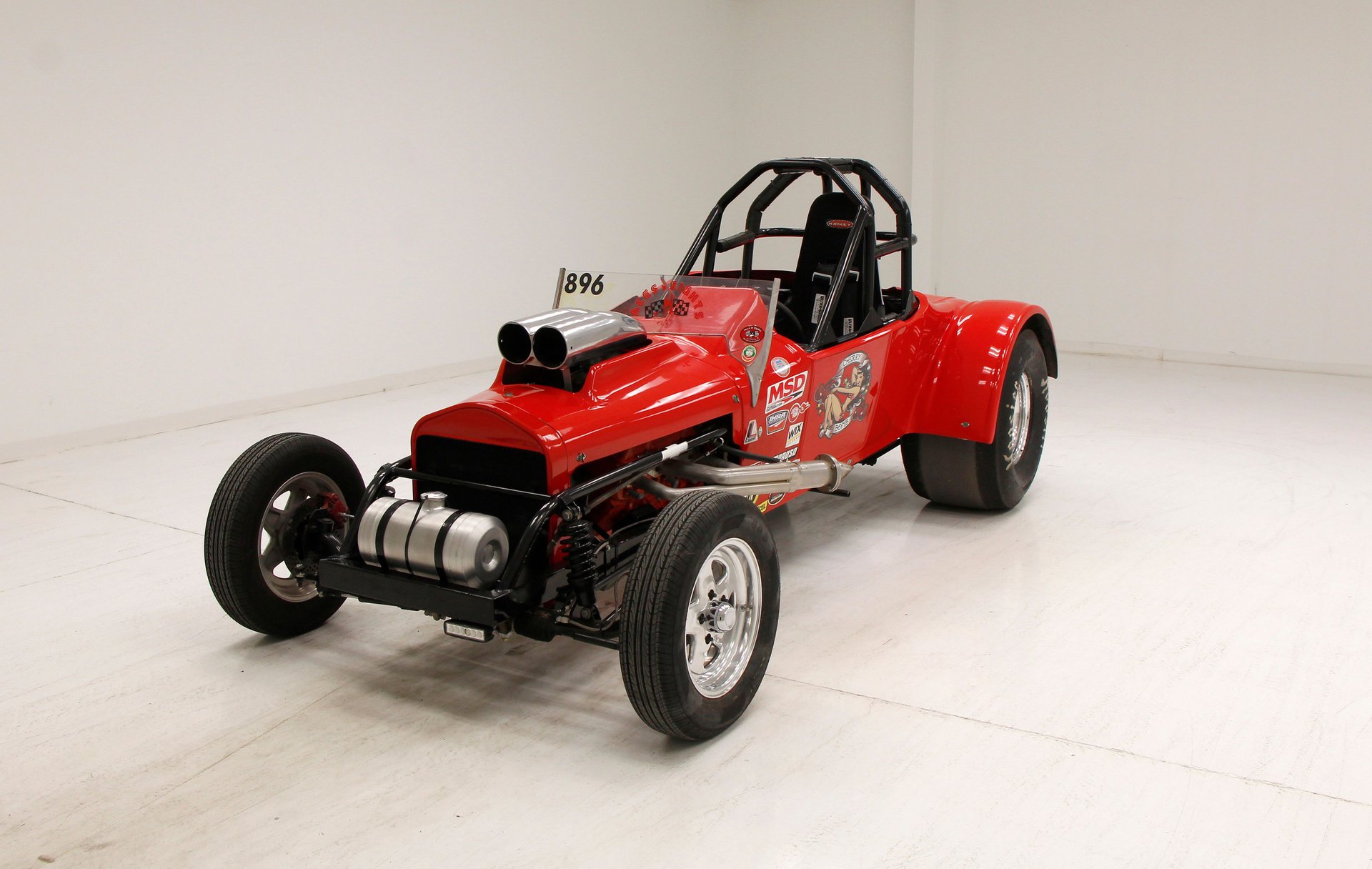 In 1959, the most popular detective show on television in the world featured a jive-talking parking lot attendant who made up his own vocabulary and drove a flamed Model T hot rod. Gerald Lloyd "Kookie" Kookson III (played by actor Edd Byrnes) was more popular than the two "big name" stars of "77 Sunset Strip," particularly with young people. A character this eccentric had to have appropriate wheels, and Warner Bros. chose a scrumptious Model T hot rod built by a true-life hot rodder (and sometimes actor) named Norm Grabowski. Although it was also seen in dozens of other movies and TV shows (plus a full-page photo in the April 29, 1957, issue of LIFE magazine), that particular rod would become known as the Kookie T, but, more importantly, it also signaled a sea of change for hot rods in general.

For consignment a Ford Model T from its last year in production of 1927, to now a competition straight liner. A “souped” up version with a big engine, and a setup for the drags. An all new fiberglass cockpit for the racer encaged racing seat, a Hurst quarter stick shifter, and large Hoosier drag slicks for the back. Consigner states he uses it for a few vintage races a year (possibly 4-6 passes) and it has run a 9.97 @ 128 MPH Get accustomed to the rear of this car as when you decide to take it on, that is all you'll see kids!

Exterior
With only its “tub”, and front cowling with radiator cover remaining, but replicated in fiberglass, it is now taken on the persona of a full-blown racer (although it's not “blown” in the performance sense.) Large curved red painted fenders cover the Hoosier racing slicks that weigh in at a mere 32/14.5W/15 and wrap 15-inch Weld Prostar wheels nicely shined for your enjoyment. A full roll cage is present, and some cowling covers the front dual engine scoops. On either side is a 1940's era looking bomber nose cone graphic so naming this racer “Cherry Bomb”. Way up front is a stainless drum fuel tank, which provides just enough fuel for each run. Snarling from either side are shiny headers and short pipe exhausts.

Interior
Fully functional and fully up to date, even the seat belts have another year on them. They are attached to a carbon fiber/aluminum Kirkey racing bucket seat which is encased within a full roll bar cage. A Hurst quarter stick shifter goes through the two speeds. The dash holds gauges that show pertinent information real time during the run, and a tachometer with shift light is mounted on top. A rally steering wheel and numerous toggles are all present and accounted for.

Drivetrain
Up front the money shot, with a consigner stated 406 ci V8 with Dart cast iron heads which have been carefully ported and polished. Inside a Scat forged steel crank shaft and 6-inch rods. All this can produce an 11.5 :1 compression ratio! A single 4-barrel Holley carburetor is atop and dual rounded bullet like air scoops suck in the O2 to mix with the racing fossils. A Powerglide 2-speed automatic transmission is on back and is capable of handling 800 HP, along with a Ford 9-inch axle with a lightweight spool center section with 4.86 gears.

Undercarriage
The fiberglass ford roadster body is mounted to a custom steel tube chassis. Spring coil over shocks are on all 4's. The rear sports 4 bar suspension, all Hein joints, and Wilwood disc brakes all around. All this has less than 25 passes on it. Noted it will need updated rear slicks to pass to pass (get it?)

Drive-Ability
Our co-worker come race car driver (a NASCAR car, several drag trucks, a wheel stander, a dragster, and a dirt track vintage car, and now this) hopped in and fired her up. Its loud and proud and goes like the wind he reported, with great brakes, and secure belts and cockpit. So vintage racing here we come.

Ready to roll once those new slicks are attached, this turnkey T bucket is sheer fun and was driven as such on the 1/4 mile. A good looker, with the namesake “Cherry Bomb” you are ready to pop it (the clutch) and take off. CU later!