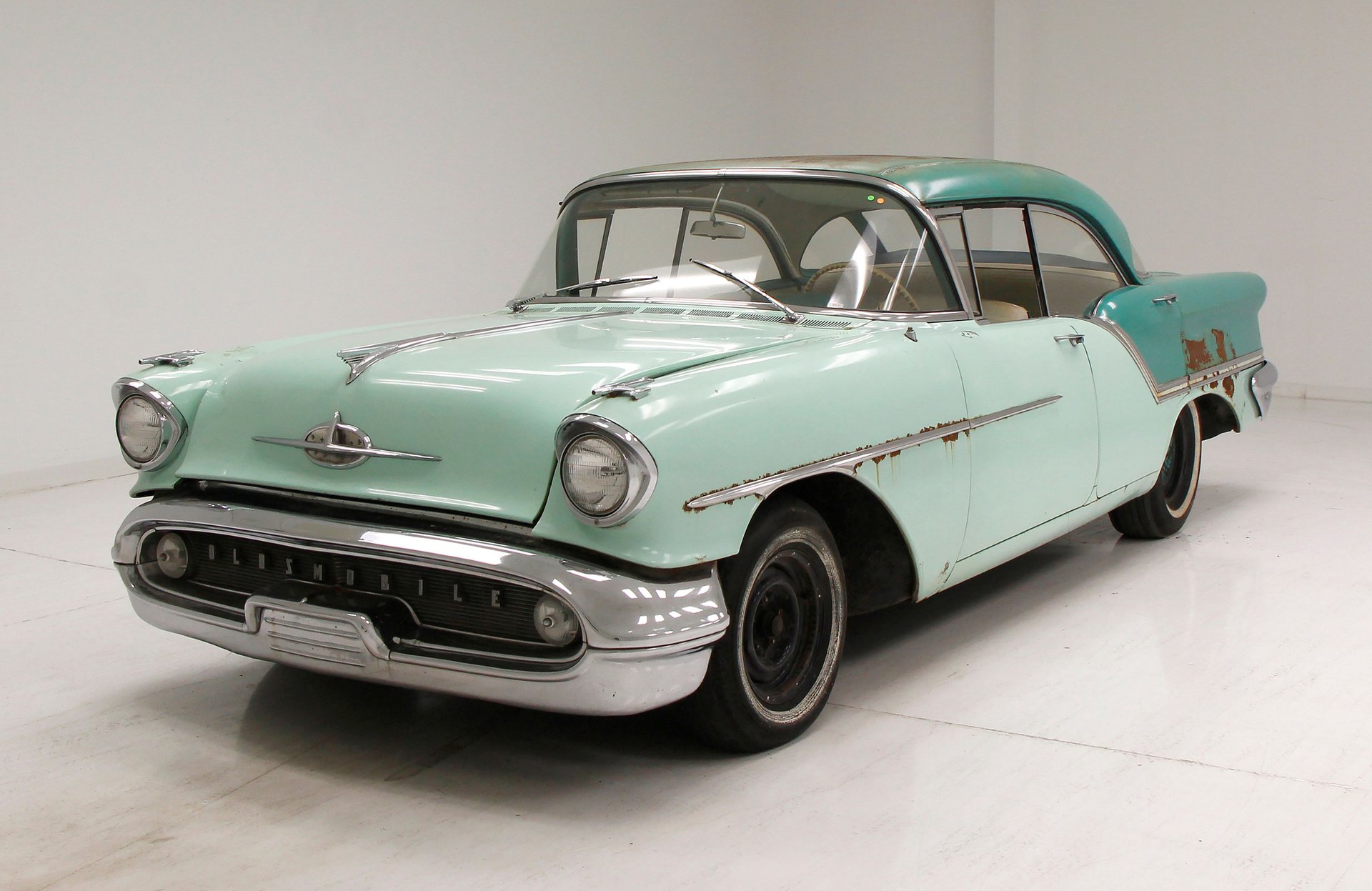 For 1957 only, the basic 88 was officially named Golden Rocket 88 taken from Oldsmobile's 1956 Motorama two passenger show car. However, the only badging was an "88" underneath each taillight. Also, for 1957 the "J2" option was offered, with three 2-barrel carburetors, similar to the Pontiac Tri-Power. The Super 88 continued as the upscale mid-line series. Under the hood, the Rocket V8 increased in displacement to 371 cubic inches and 277 horsepower for all models across the board. Although rare, three speed manual transmissions were still available. Styling highlights were more evolutional than radical overall with three-piece rear window styling utilized on some models. Oldsmobile revived station wagons for the first time since 1950 with the Super 88 Fiesta being a four-door hardtop design.

Pastels were all the rage in the late 50's and the automotive industry did not ignore this trend. These pastel themes were slathered across every make and model in the U.S. production fleet and Oldsmobile was no exception. Fresh from a long hibernation and into our halls here at the Classic Auto Mall we give you a 1957 Oldsmobile 88 4-Door hardtop. Pastels, chrome, a 3-piece rear window, that open air hardtop look, this car has it all and has already claimed a spot in this writer's heart.

Exterior
Starting upfront, a very good place to start, we see a large bass mouth bumper and inner badged Oldsmobile grille. This is in good shiny condition with no rust. Flanking it and above the grille, are a single headlight on the front of each jet topped chromed fender adornments, and these headlights sport round eye shaped V bezels all chromed. The star clustered oval and chrome hood ornament is firmly implanted on the swoop of the hood in front and is nicely preserved. On the two-tone sides we see a trim spear making its way from bow to stern and breaking up the Ice Green from the rear and top color Allegheny green. These spears have some body rust underneath them, and the rear quarter shows areas of rust. For the steel slabs, gaps are decent, and all is straight with these panels. Noted is the triple paned curved side glass rear window, with its 2 separate flanking curved glass elements in the B pillar. Bringing up the rear are large taillights inserted within a no finned rear quarter panel. Below is an exhaust in bumper which shows some dulling, rust, and a through exhaust which has taken some toll on the chrome surrounds. The hood has paint wear off, and patina rusting and dulling, but it's all surface involvement and no damage to this panel. Wheels are standard steel, with no covers all around.

Interior
A swing of the door and we can see the 1950's design broadcloth with its horizontal inserts in white, peppered within a blue cloth background field. White stitched vinyl curves above this panel and meets up with the sills on top. On the bottom is a smooth blue vinyl panel which covers the remaining door panel at the bottom. Turning out attention to the interior, extensive use of the “ovoid” as the designers of the day called it are within the dash, and dash top clock adornments framed with plenty of chrome. These present in good shape and retain their shine. Seating is bench and has been recovered in a non-matching broadcloth which is somewhat green with small dropped specks of white. Bolsters are white, and in need of some cleaning but have no rips or tears. A white paneled headliner presents fairly clean and definitely tear free. Carpet is dark blue green in back, and up front shows a need for replacement.

Drivetrain
Opening the hood, we peer at a patina and corroded engine weighing in at 370 cubes and in V8 form. It is not known if this engine is original to this car however it is the correct displacement. A single 4-barrel carburetor is atop and is covered by an air cleaner cover which shows rusting and dulling, as do the valve coverings. A 4-speed Hydramatic transmission is on back and 3.42 gears for the rear axle are noted.

Undercarriage
Some surface rust is noted on the usual suspects (suspension, rear, driveshaft) however mostly rust free on floor pans, X frame, and rockers. Independent coil springs, and rear leaf springs are the suspension, and power drum brakes are all around.

Drive-Ability
Due to an engine that cranks, but never started, this part of the description was thwarted.

All the original features are there, some are marred by the passage of time spent outside. A good interior, and the engine all there it just will not start. Exterior trimmings and panels will need some reconditioning, but this is a good example of the original car.