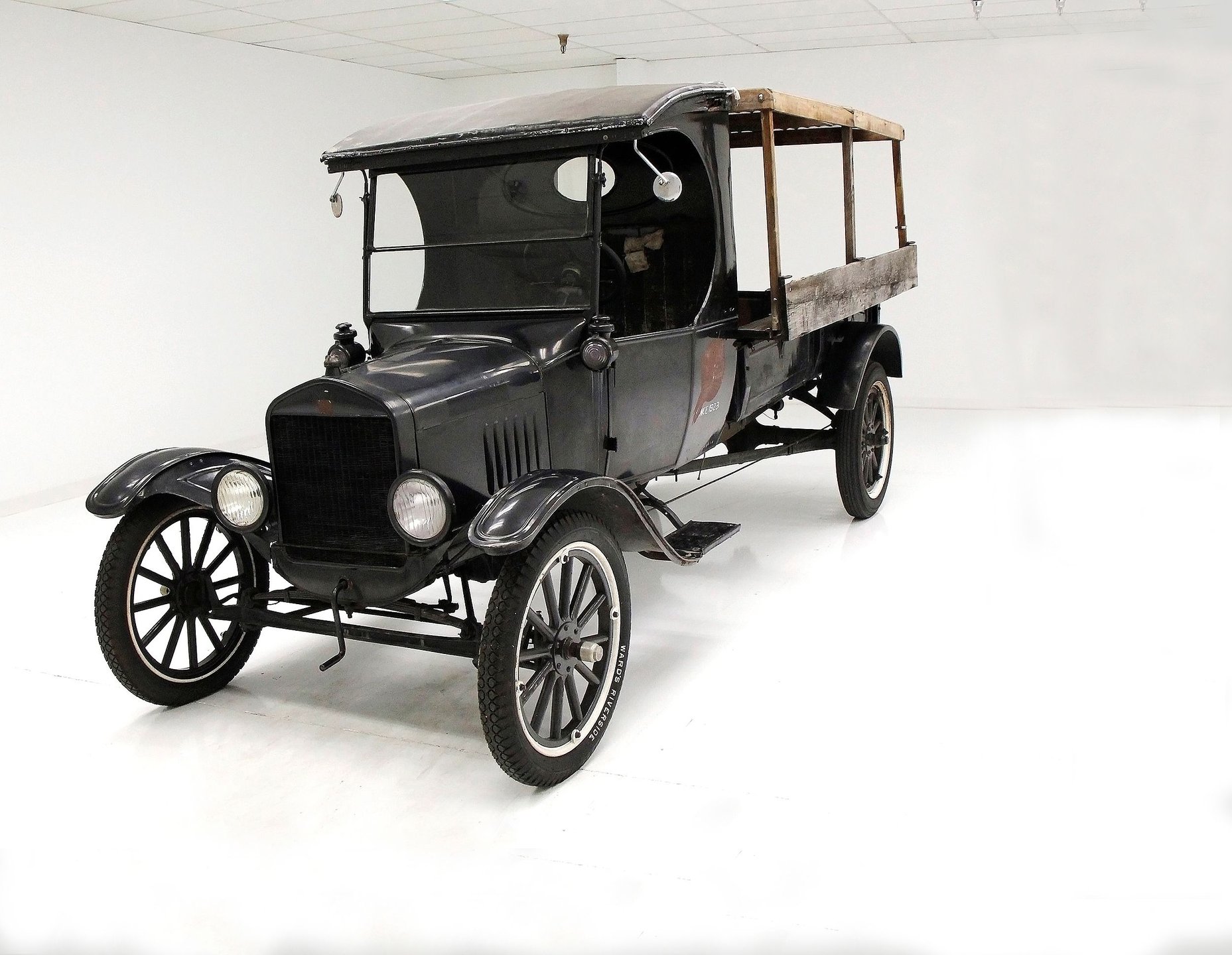 To stimulate sales Ford introduced its first factory made cab. Known as the C cab, it was only made for two years. Ford also introduced its first factory-built bed for the rear of the truck. This was quite small and many people, including the folks who owned this vehicle, declined to buy them or removed them immediately for something bigger. The bed on this truck looks as if it could have come straight off an old horse drawn wagon, which was quite common. Today, whatever else you can say about it, it certainly has the patina of age.

This vehicle for consignment, is the heavy-duty truck version of the Model T called the Model TT. Introduced in 1917, the Model TT was the only major variant of the Model T. TT's have a longer and stronger chassis and lower gear ratios to enable the standard Model T 20 HP engine to move one ton of freight. This vehicle also has a factory-made cab. Prior to 1924, Ford only sold a rolling chassis. It was left to local manufacturers to build the cabs and beds, which is why there is such a variety of different styles to be seen on remaining examples.

Exterior
Complete with its factory installed C cab with forward swooping roof to protect the interior passengers (somewhat) it melts into a single door on either side, and abuts the front cowled hood panels. These run forward to meet a radiator surround with a pressure release blowoff top in case of overheating. On this radiator surround there is no grill protector per se, and the radiator is exposed to the front. A single headlight flanks each side and are electrically operated to turn them on. Just before the windshield, dual gas lamps hang from either side providing additional lighting. On back is the original pickup box if you will, all steel and all original with a tailgate. A wood floor and matching wood benches have been added, along with a structure to hold a later corrugated metal top protect whatever or whomever was inside during the ride (somewhat!). 21-inch wood spoked wheels are surrounded in front by simple curved metal fenders, which swoop downward and melt into a small running board which aids the driver to get into the cab. On back is just a simple curved fender surrounding each rear tire and wheel setup.

Interior
About as simple and utilitarian as it gets with metal door panels and only the door latches inserted. A 2-cushion bench seat runs between the door panels and has new cushions in black vinyl. The back is remaining original and shows heavy wear and tearing. The metal dash has the headlight lever and a simple voltmeter, and that is all. It is fronted by the original large steering wheel. And the floor shifter in the center. The floor has some rubber matting, and keeping in mind this is 1924, your gearing will be controlled somewhat by the pedals as well. A round rear window allows the driver to keep an eye on whatever is in back while traveling down the dirt roads. Up top is a furringo strip frame covered with canvas which has been waterproofed up top, and remains uncharted on the bottom in the drivers compartment.

Drivetrain
Under the dual cowled hood sits a 177ci 4-cylinder engine topped by a newer carburetor with an air cleaner. This engine will produce 22 HP, and with the wheel design, can take you through the most challenging of dirt roads with a 1-ton cargo loaded. A 2speed planetary gearbox is attached, and as mentioned worked with the shift lever as well as the pedals.

Undercarriage
Nice black metal, all rust free is seen under here, with solid steel, and simple leaf spring suspension all around, and mechanical drum brakes which are only seen on the rear wheels, which makes sense as that is where the weight is.

Drive-Ability
While the engine does turn over by hand our test drive was thwarted by the ever changing Pennsylvania weather. That being said, the fact that the engine turns over is a promising sign that this truck will be ready to haul the mail or anything else you want with some time and tinkering.

Overall a nice example from 1924. No rust, a topped bed with added wood seating or shelving on the sides, and a corrugated rear roof for extra protection. A Ford mounted C cab, and bed, she's ready to drive or take to the next level of restoration.