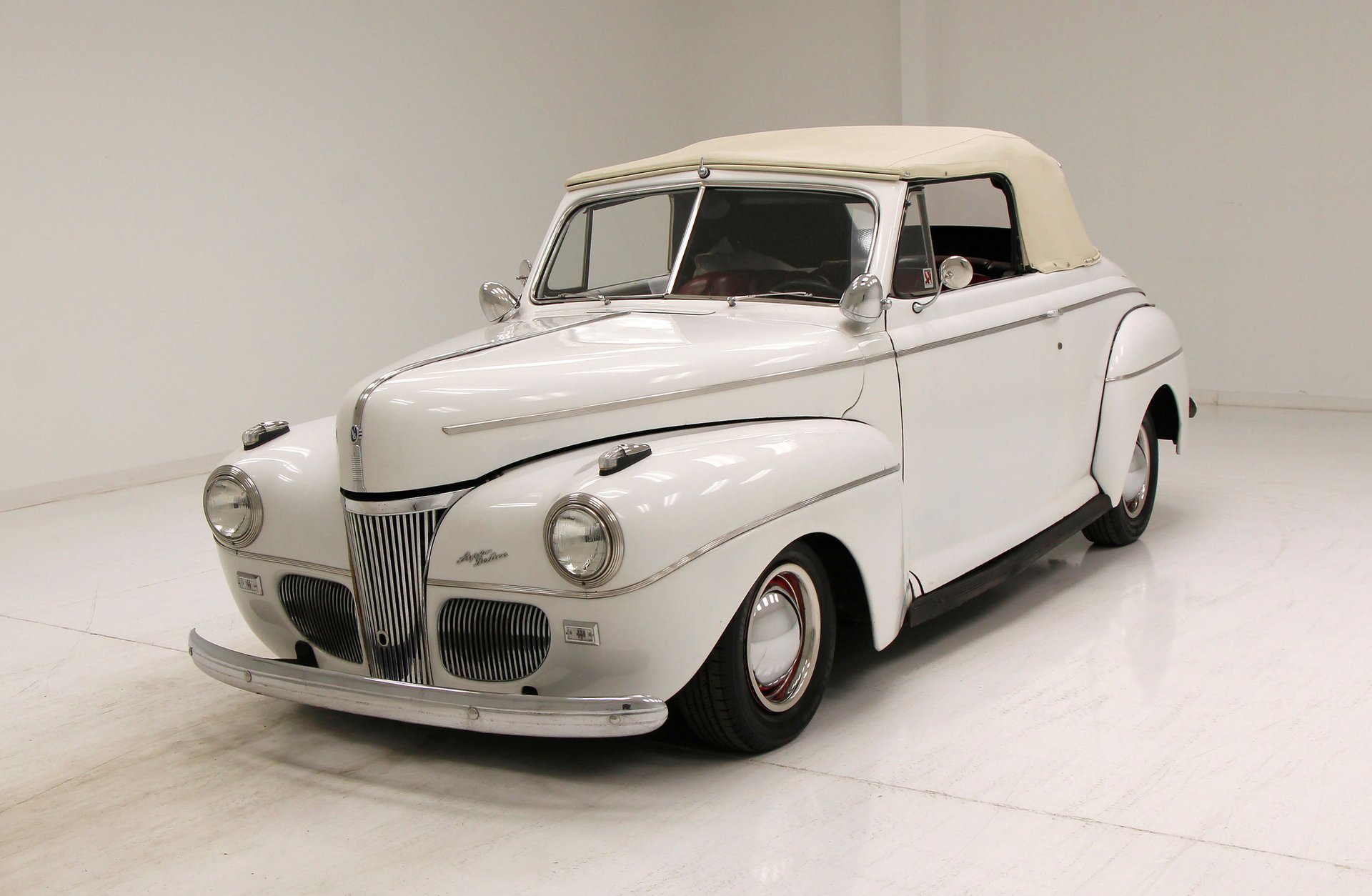 Touted as an affordable car for the masses, with every part starting from raw steel to the rubber tires, produced within the confines of the massive Ford plant, the Super Deluxe offered a smooth ride, touted a large interior, and hydraulic brakes, all at a very affordable price. Some of this may have been true, and some not, but it sold cars, and that was the bottom line in 1941.

For consignment a “worked” 1941 Ford Super Deluxe. By “worked”I mean a newer engine with more power, and some interior upgrades while keeping the original layout, but adding some snappy red and black tufted and buttoned triangular pattern seating and door panels, and a new stereo with some aftermarket digital dash readouts. The exterior remains mostly original and has some wear in various locations, and plenty of chrome trimmings.

Exterior
Draped in White, this steel slabbed Ford produced Super Deluxe has most of all its original trimmings and is looking simply fab, right out of 1941. A few faults in the paint with scrapes and chips and small areas of rust, but overall good fit and finish on the exterior body. The curved V Grille with its two flanking side panels looks shiny and unmarred. Rounded lines with bulbous fenders now with just a very small running board, we are moving into the modern era of the next car look as to overall design genre. A straight hinged on the back hood with some curved edges, a rounded trunk frame, a central passenger compartment which utilizes square doors, belt line trim spears, and fender trimmings as well as a flared rocker at the bottom. A white canvas convertible top which presents in good condition with a clear rear window, drops on top a front split windshield, and chrome framed windows which roll up and down with a crank. On all 4 corners are the standard 14-inch red painted steel wheels sporting chromed deep dish trim rings and moon caps in the center with no badging. Black walls for all corners are the standard fare for this Deluxe which is just Super!

Interior
The original Art Deco inspired dash with simple layout and limited use of chrome accenting, now has a SONY aftermarket AM/FM/CD player neatly inserted into the dash top. All original knobs and pulls remain, with some paint chipping on the dash front around said knobs and pulls. Just below the dash is a digital readout tachometer, and digital gauge cluster which reads out in horizontal, green bar format. Door panels sport black shiny vinyl uppers which are nice and smooth, and below is a wild triangular patterned stitched oxblood red patterned panel to finish off the bottom of each door. This pattern continues with triangular patterned stitched and buttoned seat inserts with shiny texture-less bolsters to frame them. An overstuffed but in the same pattern rounded “couch” if you will rear bench will have you asleep in no time when traveling along in the rear seating, it's that comfortable. Gray mini pile carpet covers the floors and is in clean condition.

Drivetrain
Flipping the hinged hood, we see in the partially restored engine bay, a 305ci V8 which our engine decoder states is a 1979 DNL coded engine. Up top is a Weiand intake and an Edelbrock 4-barrel carburetor to feed fuel and air to this newer mill. A TH350 3-speed automatic and a Ford 9-inch rear axle now finalize the drivetrain. This setup is now a 12-volt conversion electrical system.

Undercarriage
Some slight surface rust is seen throughout, but mostly just straight black solid steel for the frame and body hangers. Suspension and under drive train looks just fine, with some red overspray spattered about? On the driver's side, on the interior body panel just above the frame is some invasive rust which has taken its toll on that interior panel and eaten some of it away. It does not appear to have adversely affected the exterior body panels at this point but is so noted. Also note the small running boards are fairly involved with rust underneath the rubber coverings as the rubber is cracking. A Mustang II front suspension, and leaf springs for the rear is now on this car providing the suspension, and power disc brakes are on front, and power drums on the rear. Dual exhaust in the form of a Turbo muffler setup is winding its way rearward from the newer mill to the rear of the car.

Drive-Ability
She started right up, but despite an extensive warm up period, it never ran very smoothly. This impeded us from getting it up to speed, and testing and handling or solid braking, which I did perform at low speeds. Noted is a rear brake light which is out, the horn is in operable, and the top did not go down.

In keeping most of its original charm, we see an overall fair to good condition presenting car, much of the original trimmings retained, a newer top, and a circa 1979 V8 now gracing the engine bay. A snappy interior with some aftermarket conveniences, and we are feeling just Super...Deluxe from 1941.