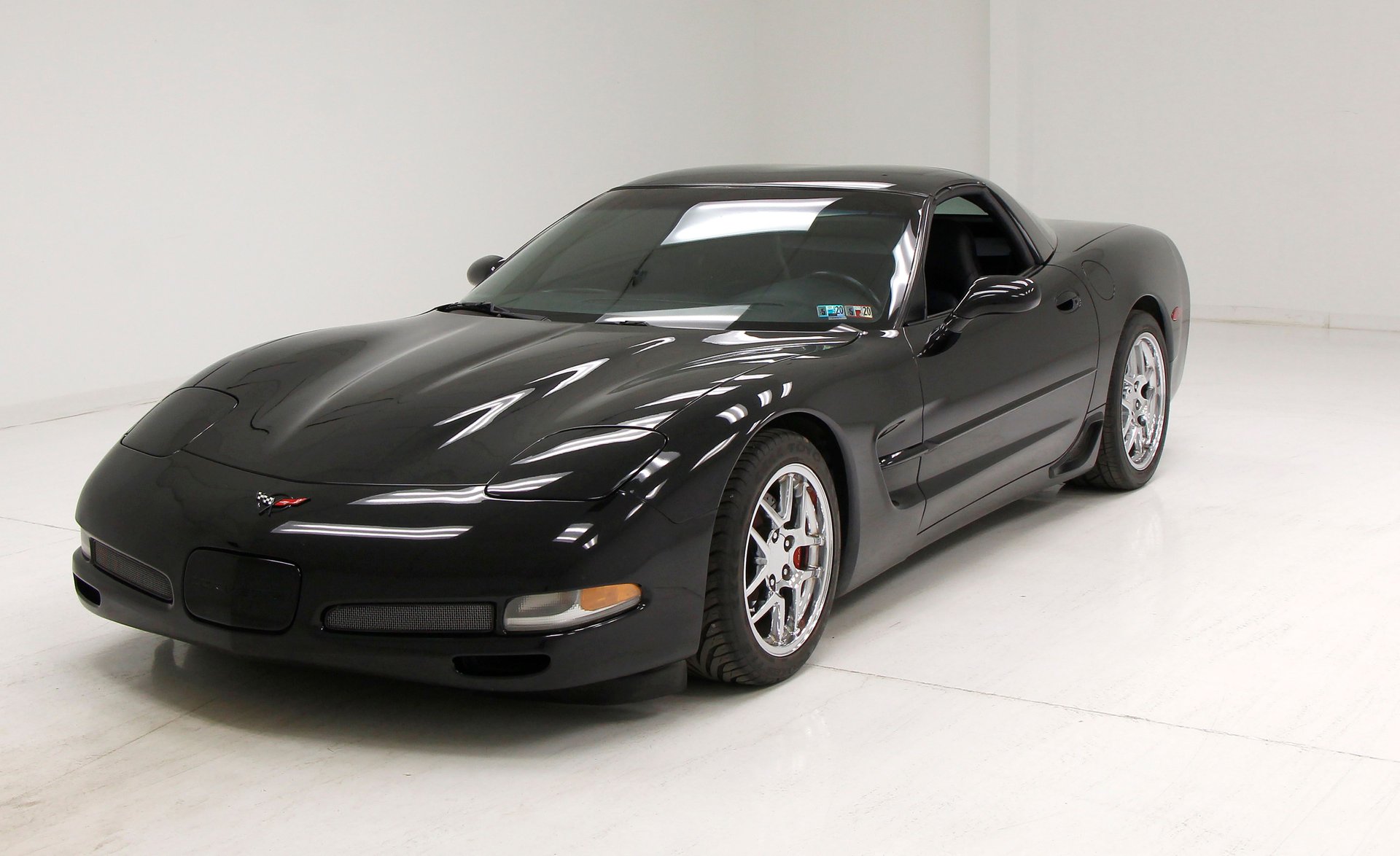 In 1951 a group of Harley Earl's "Special Projects" crew began work on a GM sports car. Bob McLean designed a general layout for the car which was originally code named, "Opel". William Durant, the founder of GM, said a wallpaper pattern he saw in a Paris hotel in 1908 inspired the bow tie logo. Supposedly, he ripped off a small piece of it and brought it back to Detroit. Myron Scott, at the time, Chevrolet's Chief photographer, is credited with coming up with the Corvette name, drawing from the small, fast warships of the "Corvette" class.

A C5 or 5th body design, LS1 engine Corvette up for consignment. All menacing black, all very nice, all rebuilt engine with some snappy Dyno results for you to view, certainly with improvements from the factory. 379.5 HP to be exact, and some extras for handling, ride control, and chassis dampening.

Exterior
A serious coating of U8555 Black covers the exterior of this curvaceous car. With a virtual lack of any chrome save for the 4 protruding tailpipes, and the cross flag on the nose and the polished aluminum 5 spoke wheels on all 4 corners, the Black quickly takes over as star of the show, at least on the exterior. Seen is a removable top for some open-air motoring. Also noted are those snazzy red brake calipers on all 4 corners.

Interior
Beautifully complimentary buckets with a memory and convenience package, black carpet and a black center console and dash add to the menacing all black look of this car. The interior presents in nice condition. The drivers and passenger's seat are power operated, and we can note power windows, power locks, cruise control, a heads-up display, and a remote deck lid button. You have the option of dual zone climate control. An AM/FM/CD sound system is installed from the factory. Overall a very nice presentation as it pertains to the interior, all in its mostly analog instrument form, with a slight peppering of digital readouts for the temp and radio.

Drivetrain
The original but rebuilt in 2010 according to the consigner, 5.7 Liter Sequential fuel injection V8 is under the forward tilting hood. It now has headers and a 6-speed manual transmission is attached to the rear. For the rear axle we have a limited slip 3.42 (RPO G42) rear axle.

Undercarriage
Overall very clean, with absolutely no rust, and very solid structure underneath. Selective ride control, and continuously variable realtime chassis dampening, with traction control, coupled with 4 wheel C5 independent suspension, and power disc brakes are all around underneath.

Drive-Ability
She fires right up and sounds great with those headers and 379.5 horses waiting to be galloped around our test track, and a thoroughbred it was. I'm not really sure if there is anything extra that was put into this engine during the rebuild, but I do suspect there is something up in power because it was definitely an E ticket ride! Great handler, good cruiser and everything control wise works swimmingly.

Overall a very nice example of a 19 year old 'Vette, that has been well cared for. Documentation for the new HP rating from the 2010 rebuild reflect on how the actual car was taken care of...very nicely, for a very nice and more powerful version of the 2001 Corvette.