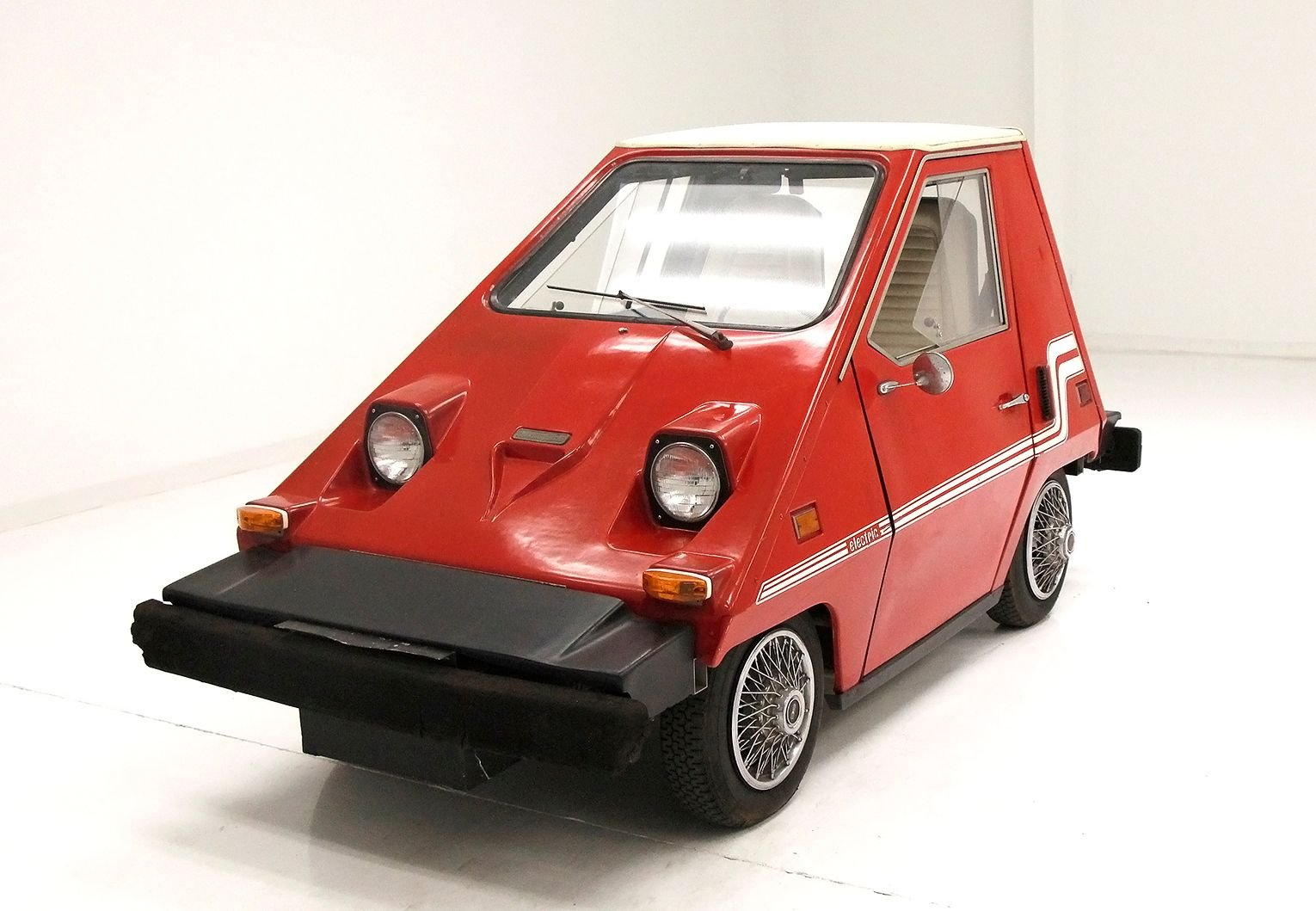 Even in its heyday, the Citicar wasn't exactly attractive or exciting to drive. Its speed topped out below 40 miles per hour. Mostly the brainchild of Ron Gremban, who headed research and development of the Sebring Vanguard Citicar. Ron has been an EV activist since the late 1960's when, as a Caltech student, he drove an electric car from Pasadena to Boston on a nine-day journey to promote the viability of the technology. In the early 1970's, in the wake of the Arab oil embargo, Gremban joined the Citicar team.

For consignment a barn find version of the Sebring Vanguard Citicar. Although unknown this could be a later version CommutaCar produced by Commuter Vehicles with its large bumpers. Ample room for 2, a toggle switch for a shifter, and plenty of volt meters this early attempt at an electric car, and its shortcomings, but paved the way for today's hybrids and electric cars.

Exterior
A fiberglass wedge painted red with a white top to keep the interior cool, the car nearly has more crash bumper than actual car. This version sports a snazzy dual spear stripe with a computer type font from the mid '80's that reads simply ELECTRIC. Sliding side windows allow air to circulate within the car when in motion, and a lift up rear rectangular window allows access to the batteries. This car has Oldsmobile logo spoked chromed wheels that may weigh more than the car but add some style to this otherwise utilitarian design. Probably put on because the original wheels tended to rust and were topped by moon caps.

Interior
Not unlike a nuclear power plant, the dash has plenty of meters, gauges, lights and switches and all in woodgrain. Large high back vinyl seats, that need a good cleaning sit side by side in the small compartment, and black carpeting covers the floor and is in fair condition.

Drivetrain
Mostly unknown, but based on our crack research team, it has a 6HP electric motor, and could reach a top speed of 35MPH. The range is unknown, and this model is currently not operational.

Undercarriage
Aluminum tube and rectangular bar frame, and aluminum floor pans are unscathed with any rust. Some surface rust is seen but is minor. A large electric motor hangs from the rear of this car and wiring appears all intact.

With features like the large bumpers and front hood badging this car appears to be a Commuter Vehicles CommutaCar. It has the badging of a Sebring Vanguard Car in the form the spear, and electric type font. But all the other features point to the Commuter Vehicles Creation. Barn find condition, does not run.