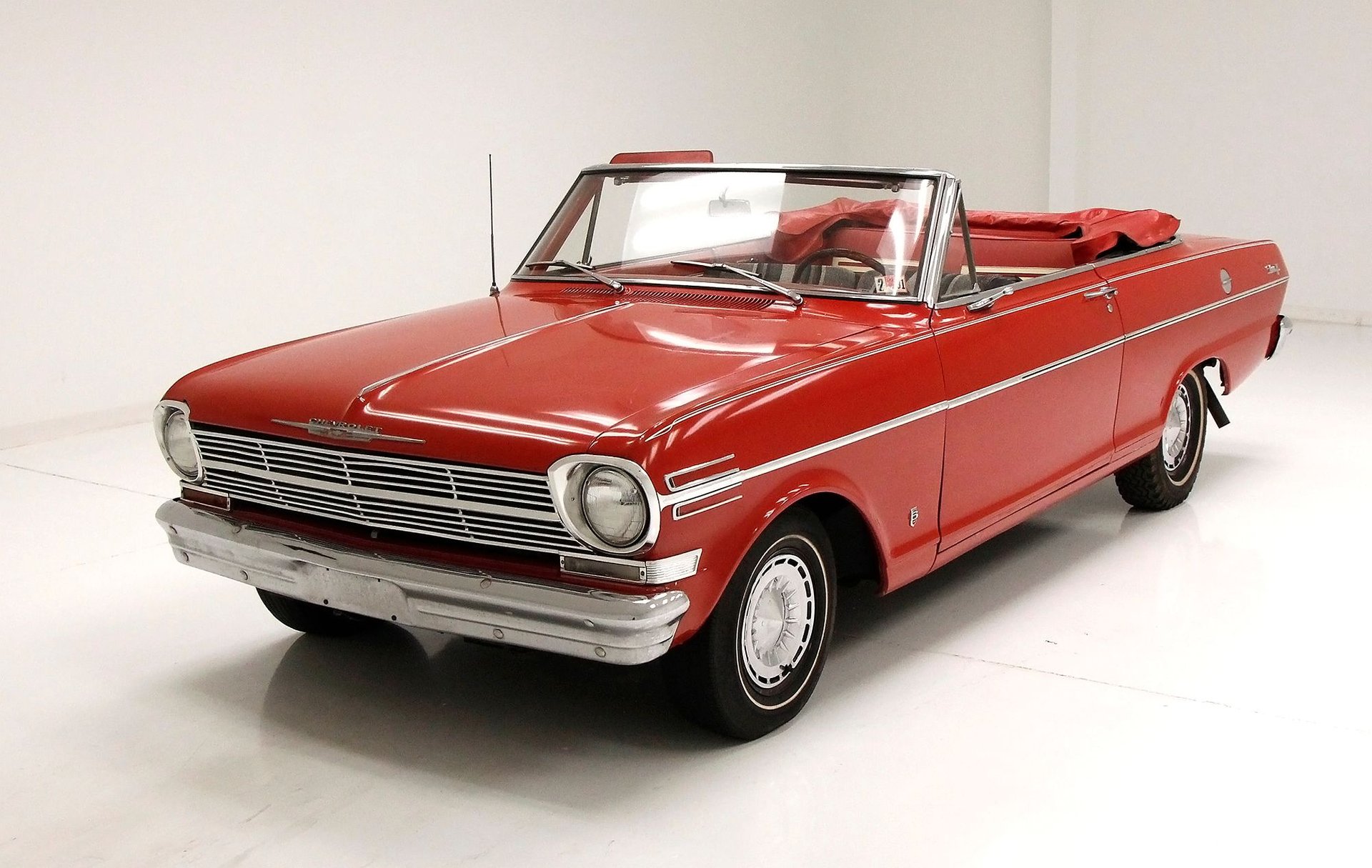 The Chevy Nova was a compact competitor in the legendary American pony wars. While the 1960's and 1970's witnessed a fight between American automotive manufacturers to produce the fastest and most powerful muscle cars, the Chevy Nova was just right when it came to size, speed, and affordability. But it didn't start out as the Chevy Nova…not quite, anyway. Eager to produce a budget-friendly compact muscle car, Chevy introduced the Chevy II. As a model name, Nova was relegated to runner-up name because it didn't start with C. However, Nova was chosen as the name for the higher-end, sportier trim option, and did eventually replace Chevy II as the car's official name in 1969.

For consignment a piece of early muscle car, before they knew of such a term muscle car. This one has seen an exterior respray and has its interior in progress with regard to restoration. It is badged a Chevy II but has the Nova upgraded option package. And it's a convertible!

Exterior
With a respray, the exterior is bathed in Roman Red, and retains its shine. All steel panels are straight and have very well minded gaps. Chrome and brite-work is very clean and shiny with no dimpling or fading. Badging is in fair condition with paint color and shine disappearing. 15-inch Chevy badged chromed wheel covers are on all 4 corners with the rears being wrapped in snow tires? (When is the last time you saw a set of those??). The white convertible top of in poor condition with numerous areas of patching with white gaffers' tape. The rear plastic window is yellowed smoked over and has a hole in it. It does however operate up and down.

Interior
Possibly original front seat, and a new rear seat we note a front bench that is covered with a seat cover, so it is unknown the actual condition of the front bench. A rear bench shows very nicely and has nifty horizontal white highlights in vinyl on the seat backs. Door panels are all smooth stretched red vinyl and utilize the similar horizontal white rib racing through the center. Original shaped dash remains, which is very simply designed and definitely in early 1960's style. Overall the dash presents nicely. Even the original radio is present. Nice deep red carpeting covers the rear floor, and the front floor is still in need of the carpet, showing wear on the metal interior floorboard.

Drivetrain
194ci of inline 6 cylinders in original condition glorifies the original engine bay. Some rust on the air cleaner, and oiling has built up on this engine. A 1-barrel carburetor is on top, and a 2-speed Powerglide is behind.

Undercarriage
Some surface rust, and plenty of spackled on tar and pitch like material (Resin?) on the floorboards, some frame parts and just above the rockers. I may have some concern as to exactly what is under it. Some invasive rust with no tar material on it is seen on the passenger's rocker near the rear wheel well.

Drive-Ability
This car starts, and runs, and drives nicely. It shifts smoothly and offers up a nice ride. Accessories work, and top leaked the day we took it out. Also noted the engine puts out a minor tap when running.

An example from 1962 that has many redeeming qualities, some beginnings of a restoration, and in need of some more effort to bring it fully back. These cars are pieces of history and having an example that is not seen every day, should be a motivating factor to want to get one.