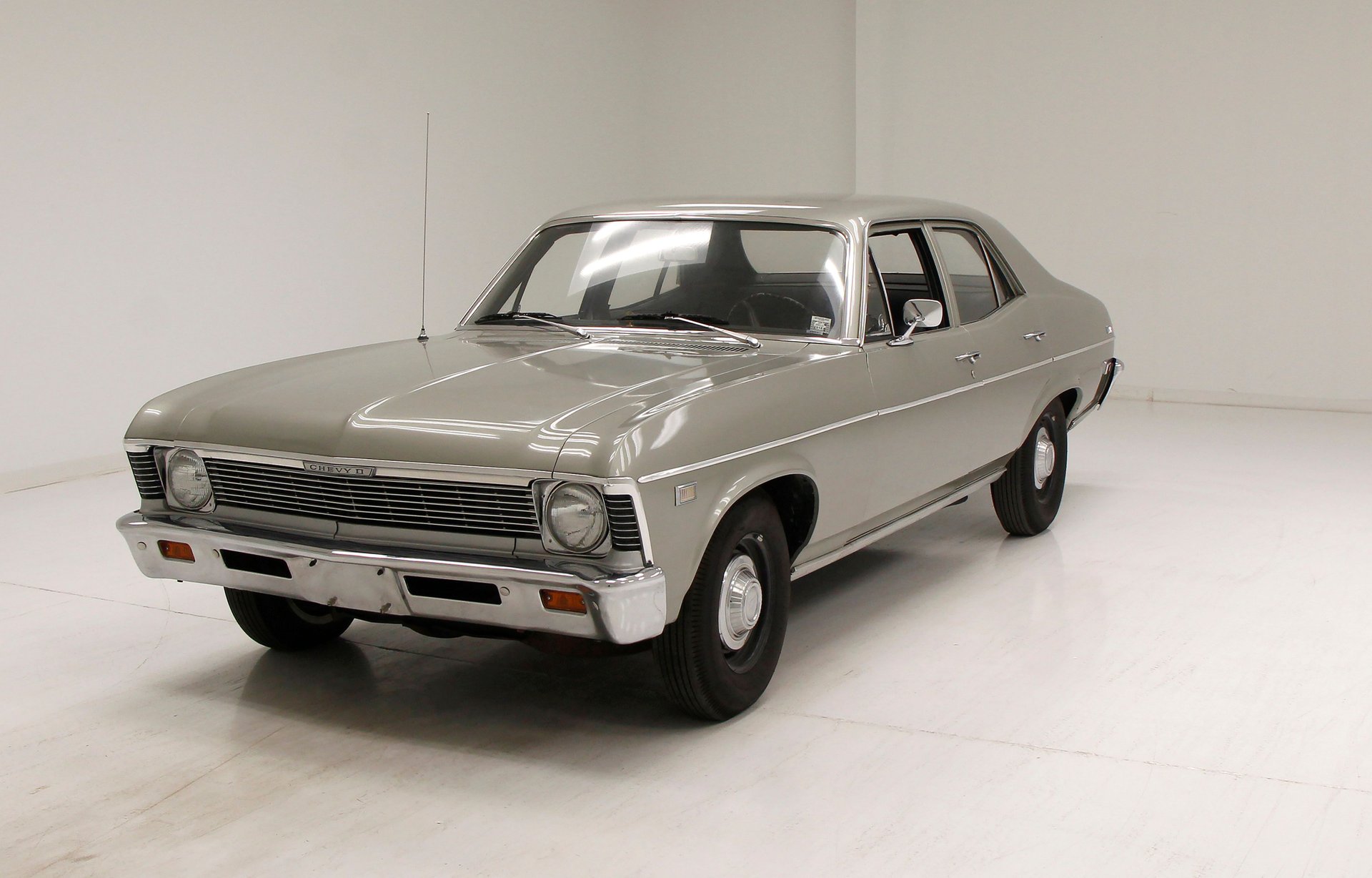 After losing some compact car market share in previous years to Ford, in 1960 Chevrolet went back to the drawing board. They had visions of quickly producing a compact car for the masses that would be both economical and desirable. By 1962, the first Chevy II Nova rolled off the production line.

For consignment a nice nugget of Chevrolet history if you will, in a 1968 version of the Nova. This car is mostly original, and has only 64,900 miles clocked, and overall presents as such.

Exterior
This 4-door sedan has decent steel with evidence of bodywork on the passenger's side rear quarter panel lip, good gaps, and a nice coating of silver paint on the exterior. There is one small area of invasive rust on the drivers rear fender rim, otherwise the car is clean and rust free. Chrome and trim is looking smart and shiny with no rust or dulling. Blackwall tires are all around and have a factory Chevrolet hub cap in the center. Glass is all clear and on the back bumper remains a NIXON campaign sticker from the era.

Interior
A statue of Jesus sits on the top of the dash (not from the factory) and watches over a sea of black vinyl and rubber floor coverings. It's all original in here kids, with dual benches one for the front and the other for the rear. The factory dash is looking good too, with clean gauges covered with clear plastic. As is the interior the door panels are original and have some chrome accenting in the form of a vertical strip and a horizontal chromed badge. Utilitarian is the buzz word, but well kept, including the trunk which has the factory liner in it, and original spare and jack.

Drivetrain
A 194ci I-6 engine sits in a original appearing engine bay. This engine is not original to the car as the casting date code is C275 which has it cast on March 7, 1965 according to our decoder. Also, the serial number on the engine F0405OR says that his engine was assembled in Flint plant on April 5th, 1965 and is a 194ci I-6. There is a new carburetor on top, however the original has been retained, and is not on due to a fuel leak in a gasket area. A 2-speed Powerglide automatic transmission on back, and a 10-bolt rear axle is noted.

Undercarriage
Some surface rust on suspension parts, and front frame but it remains structurally solid. Floorpans and rockers are rust free. Independent coil spring suspension is on front, and leaf springs for the rear and drum brakes all around.

Drive-Ability
This gem started right up, and handled our test track well with nice acceleration, good sturdy handling, and good brakes. Noted to make it a little easier it has power steering installed.

A toned-down version of the muscle mania that was going on at this time. Clean simple interior, an inline 6-cylinder engine, and mostly rust-free exterior. Panels are nice and straight, and it has low miles. A nice example.