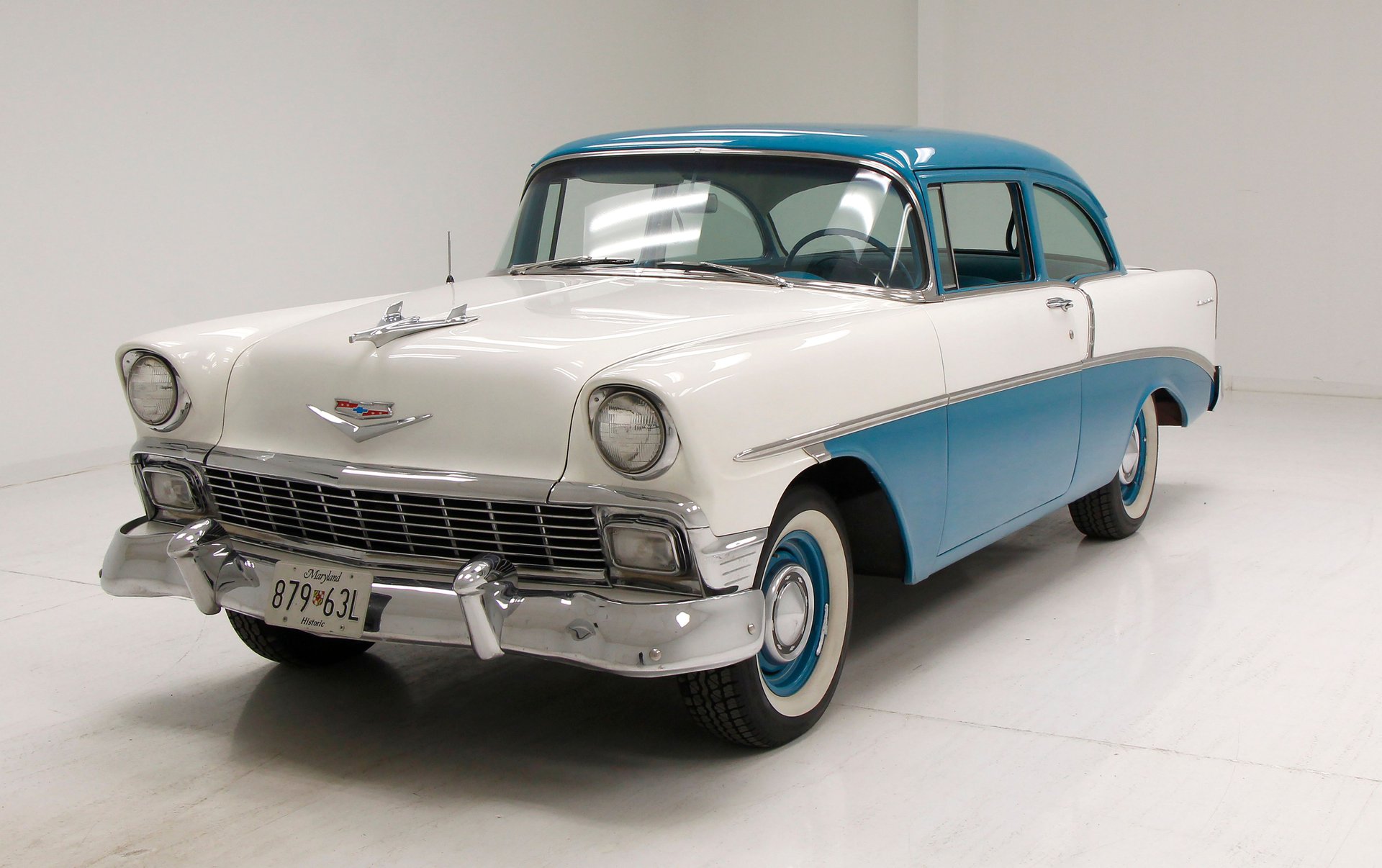 The Chevrolet Delray, named after Delray Beach, Florida, debuted in 1954 as an optional trim level on two-door models of Chevrolet's mid-range 210 Series. In 1958, it became a distinct series of its own at the bottom of Chevy's lineup (replacing the discontinued 150), and added a four-door sedan, and sedan delivery, but it only remained in production for that model year.

For consignment, a 1956 version of the Chevrolet Del Ray. For the Tri-Five years the Delray was essentially an interior option package for the plain 210 two-door sedan. It featured an upgraded vinyl upholstery with "waffle-like" pleating, color-keyed to the exterior, along with carpeting and other minor upgrades. This fully restored (between 1996 and 1999) project is a 3 owner car. The third and current owner and now consigner did most of the work, and used as many NOS parts as he could get his hands on. Consigner states that only 32,000 miles have been clocked since the restoration.

Exterior
With the avid use of the side trim spear to define the delineation between colors we can see Twilight Turquoise dancing with India Ivory white. The turquoise for the roof, and then the lower 2 thirds of the side panels. All paint is just well done, and deep as the ocean, well buffed. From the front jet hood ornament to the grille and bumper below the chrome is sooo good it still looks like it is wet. This holds true for the light bezels, window surrounds and bumpers. Badging is showroom and is an exercise on the cloisonné technique. Twilight Turquoise steel painted wheels are capped with dog dish style chromed caps and wrapped in wide whites. Grab your squeeze in a poodle skirt, and let's hop to the drive in movie where we do not care what is playing.

Interior
In beautifully preserved and redone style, more interaction with the interior surfaces some playing the Twilight Turquoise, and others playing the India Ivory. Take the seats which have the quintessential Del Ray waffle style inserts surrounded by the ivory in the bolsters. More play of these two colors on the dash with its dual fan cowls into the dash, one side with the gauge cluster, and the other with the radio speaker, circular clock at the bottom, and Chevrolet badge written in chrome in your grandmother's handwriting. Shine shine shine is all one sees on the dash be it the turquoise, ivory or chrome it is simply beautifully performed. Blue carpet floods the floors and period correct looking rubber floor protectors are beneath each foot area. Door panels dance to the same beat, and the headliner is white and clean in all its perforated vinyl beauty.

Drivetrain
With the original block freezing, the consigner went to great lengths to track down a NOS replacement block and rebuilt the engine. This top of the line 283ci is topped with the rarely seen twin 4-barrel Carter carburetors. The only thing not NOS or original are the heads which are Powerpack Heads. A 3-speed with overdrive transmission is attached and pushes power rearward to a 3.31 axle

Undercarriage
Just beautifully black painted steel frame holds up a primer color undercarriage of straight metal. Not even road dirt can be seen, so it was most likely trailered at times, and when used certainly not in bad weather. As near to factory as one can get but on a 63 year old car.

Drive-Ability
A quick starter, beautiful driver, and awesome cruiser, all functions worked flawlessly, and our ride was very pleasurable. Nary even a creak or squeak, it is solid as a Tri-Five rock.

A consigner set out to replicate a car he had when at a young and more tender age, and he accomplished it in spades! This beautifully restored Del Ray with its rebuilt engine, remains original except for the as stated Powerpack heads and block. All else is either NOS or original.

Offered at $18,500
view inventory
Thank you for your interest! We'll get back to you soon!
Speed Digital