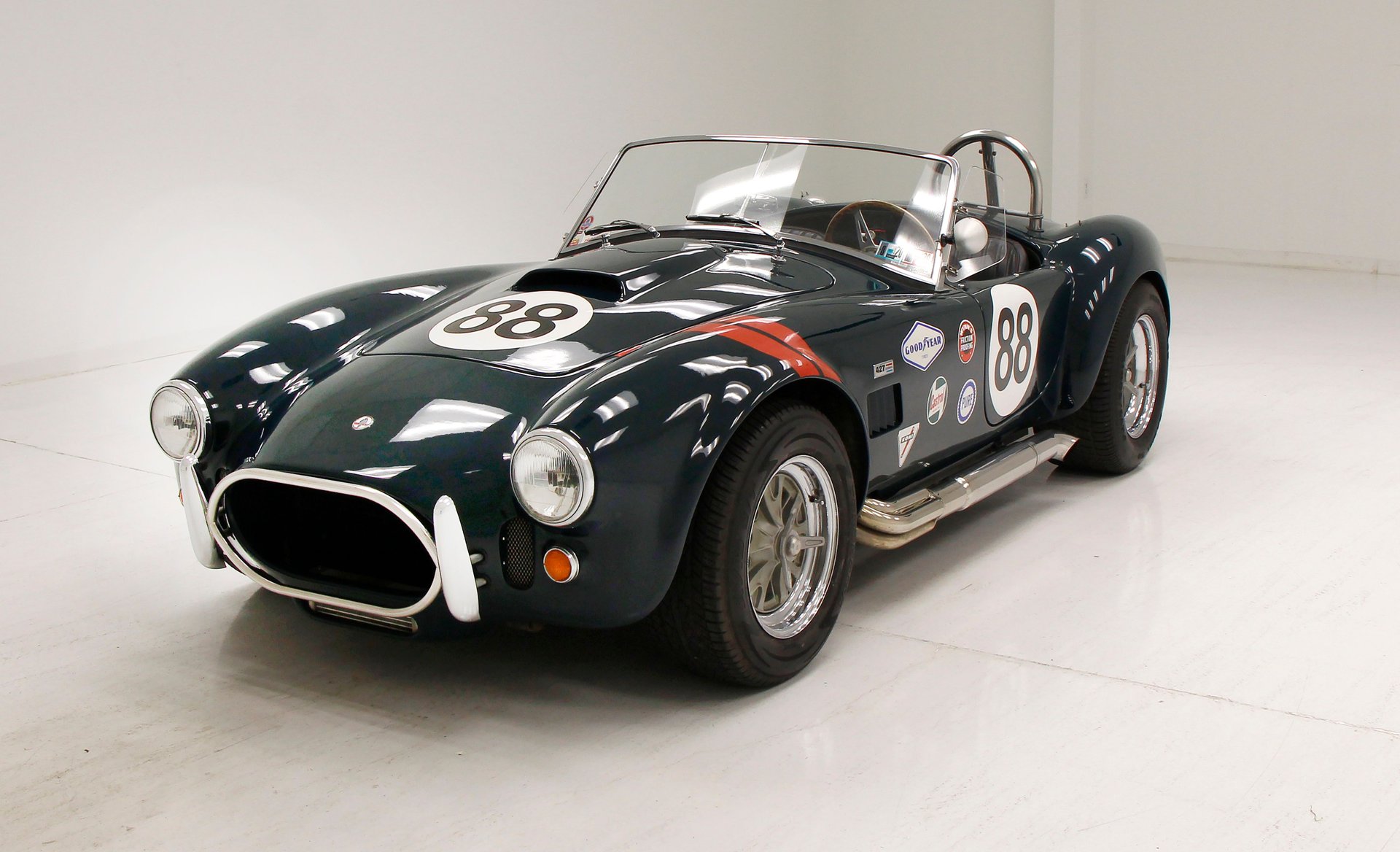 Road racing is a form of motorsport racing held on a paved road surface. The races can be held either on a closed circuit or on a street circuit utilizing temporarily closed public roads. Originally, road races were held almost entirely on public roads, however, public safety concerns eventually led to most races being held on purpose built racing circuits. Road racing's origins were centered in Western Europe and Great Britain as motor vehicles became more common in the early 20th century. After the Second World War, automobile road races were organized into a series called the Formula One world championship sanctioned by the Fédération Internationale de l'Automobile (FIA)

For consignment courtesy the Integrity Coach Works, Stuart, Florida, in the form of a road racing Cobra. This car is complete with British Racing green paint with full set of vinyl appliqués including the red rookie stripes. A side piped version with a 351 Ford Windsor circa 1972, and C4 Corvette suspension. A custom build that looks like it has racing history.

Exterior
A clean fiberglass body is draped in British Racing Green, then spattered with vinyl sponsor stickers, and completed with the number 88 in the white rounds. A few scratches and some orange peel overspray are seen throughout. Up front chrome push bars are flanked by single bezeled headlights which have parking lights within them. A scooped hood has the red rookie stripes on the driver's side front quarter next to it, and a raked brite-work trimmed windshield has dual wing windows off either side. A note on this windshield shows some center de-lamination seen on the glass. Moving rearward, the chromed side pipes snake out from under the front quarters, and eventually form a single fat side pipe on either side which terminates with an outward bend just before the rear wheel well. A hoop style roll bar is behind the driver's seat, and there is a soft top with no side curtains that goes with this car. Halibrand look alike classic wheels with faux knockoffs are on all 4 corners.

Interior
All in black, simple bomber style buckets, a black padded dash peppered with Autometer gauges and fronted by a wood rimmed steering wheel make this car look classic just like the originals. Black carpet covers the floors and a long shift lever rises from a center hump. A shout to the trunk where a spare is being housed.

Drivetrain
A 351ci Windsor V8 is fitted nicely into a tight engine bay. It is topped by an Edelbrock Torker II intake and a 4-barrel Edelbrock carburetor. A 4-speed manual Toploader transmission is attached.

Undercarriage
A boxed metal frame holds everything tightly and securely together underneath. No rust is noted, and Corvette C4 suspension is seen. This suspension is forged aluminum a arms up front, and transverse leaf 4 link with trailing arms on the rear. Disc brakes are all around. A little bit of oil staining is seen on the bottom of the engine in the oil pan area.

Drive-Ability
A tad of a tight fit, but this car fired right up, has a great sound, runs well, and handles like it's on rails. There is plenty of power, and with the decals numbers and stripes I pictured myself taking a quick tool through Maggotts, Becketts and Chapel turn and heading down the Hangar straight taking the checkers at Silverstone.

A nicely done tribute to a road racing heritage draped in BRG, stickers, and number rounds, plenty of power, nice C4 suspension, great sounding side pipes, ( watch yourself on exit you take a wide step away from this doors!) and a simple interior, we are primed to hear the horn blow and make a run to our angle parked cars neatly slotted on the front straight, fire them up and take off while trying to strap in at 100+ MPH.. Ahhhh those were the days.