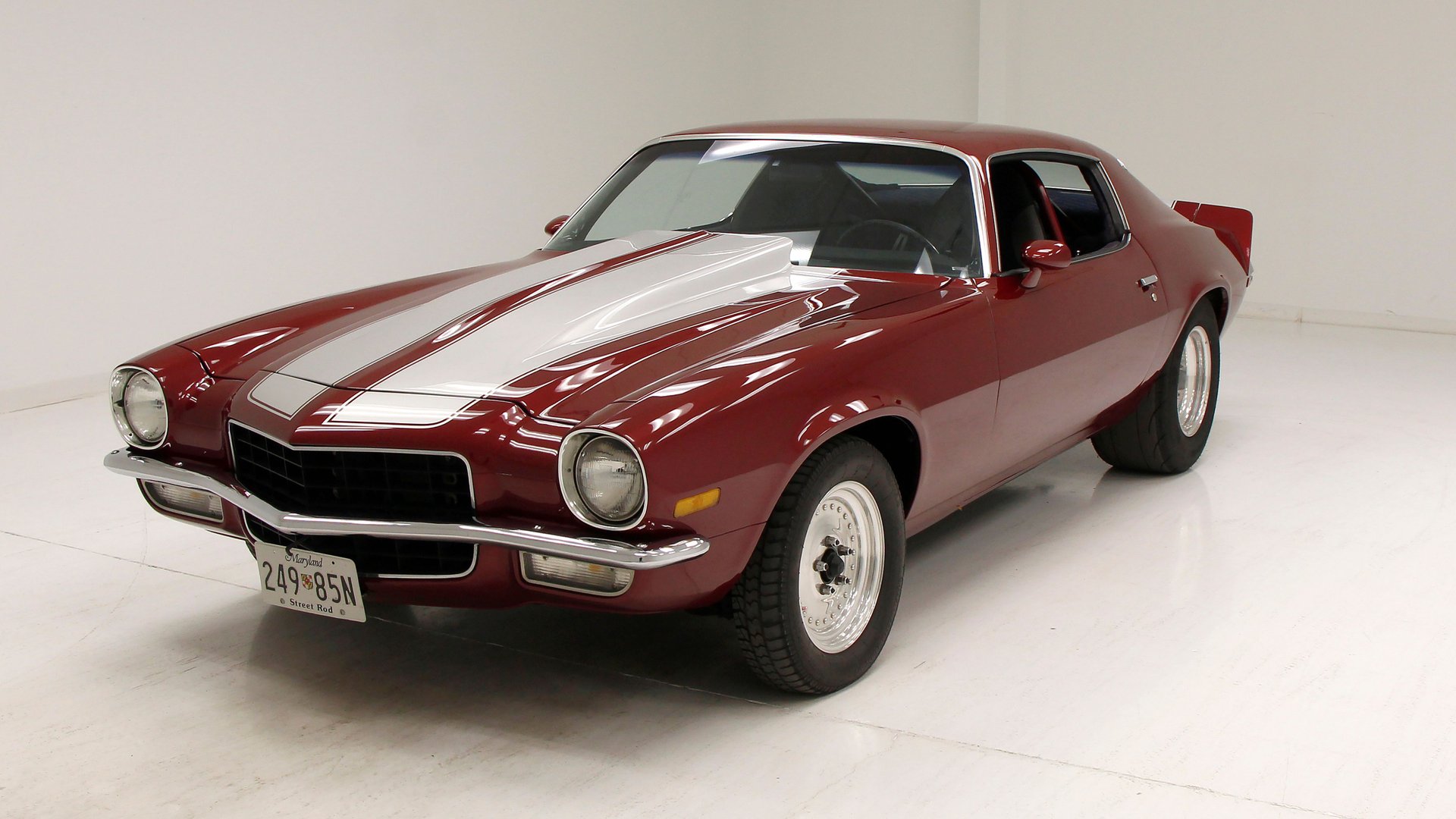 Drag racing was born in the dry lake beds in the California deserts. In the 1930's as engines got better and drivers got braver, speeds began topping 100mph. But it wasn't until after World War II that a bunch of kids with cars, hanging out with nowhere in particular to go, turned into something more serious. Popularity grew steadily but drag racing still remained largely an underground pastime. Races frequently took place on disused military runways with the first organized event dating back to 1949 at the Goleta Air Base in California. As the decade turned drag racing began to get organized. The National Hot Rod Association (NHRA) was founded in 1951 by Wally Parks, and within the decade two classes of competition had developed 'Unmodified Stock' and 'Top Eliminator'.

For consignment a 1970 Camaro, highly modified to get the lowest ET possible in a straight-line race. Plenty of power, a mostly original looking 1970 car, but do not be fooled, this Camaro rocks and knocks off socks.

Exterior
With a Maroon respray in 2003, this straight liner has plenty of spit shine left on the steel. Exterior gaps are good, and panels remain straight. A snazzy wide white stripe runs up the scooped hood and continues on the rear deck with a spoiler. Bumpers are mirror-like, and all trim remains very nicely preserved. Starting in 1970, began the years when GM began to change the design of the Camaro, and blurred the lines between a Camaro and a Pontiac, give a gaze to the front of the car and it will pan out! Not a true “beak” but certainly features that resemble each other. 15-inch polished Centerline AutoDrag wheels are on all 4 corners, and we see the fronts wrapped with 165R15's and the rear with Mickey Thompson ET Street 325/50R15's

Interior
A swing of the doors and we see significant modification to the interior, starting with a full 8-point Competition Engineering roll cage, Jazz race seats with a 5 point harness, and all Autometer gauges replace the factory ones which still remain. Nice black carpet covers the floors, and on the door panels a snazzy triangular stitched vinyl pattern abounds all in black. Other highlights include a B&M Quicksilver shifter, a Hurst line lock, and a tilt steering wheel. An interesting combo of street racer and creature comforts.

Drivetrain
A pristine and clean 350ci V8 with a .060 overbore, JE pistons that push it to an 11:1 compression ratio, and a Cam Dynamics roller cam (specs .640i, and 615e lift @.050). On either side are 1967 327 300 HP heads (Camel hump) which have been fully ported, polished, and flowed on a flow bench, as well as cc'd. A list as long as your arm can be perused direct from the consigner as to all the work that has been put into this mill. A Holley 800 cfm double pumper carb throws fossils and O2 through an Edelbrock Torker intake. On the back of the mill is a TH400 3-speed automatic transmission, and on the rear axle is a Mopar 8 3/4" with 4.56 gears and is spooled.

Undercarriage
A tubbed and tied frame, Moroso front springs, weld on ladder bars, and Hooker headers are just a few of the long list of highlights that have been bestowed upon this car. All rust free, a few road scrapes, but an overall nice clean undercarriage.

Drive-Ability
Yes! Yes! Yes! It definitely drives, it certainly starts, and it offers up plenty of ear candy when the throttle is pushed. Climbing in is a bit much for this 60 YO writer, but once in it is comfortable, and all is working well. Noted there are no wipers and heater has long since been removed.

At first glance an original 1970 style Camaro with some interesting wheels. But if we dig deeper, there is plenty of extra work that went into this car on the mechanical front, and if remotely interested, you should have a gander at the specs, which are extensively documented. Let's go racin' kids!