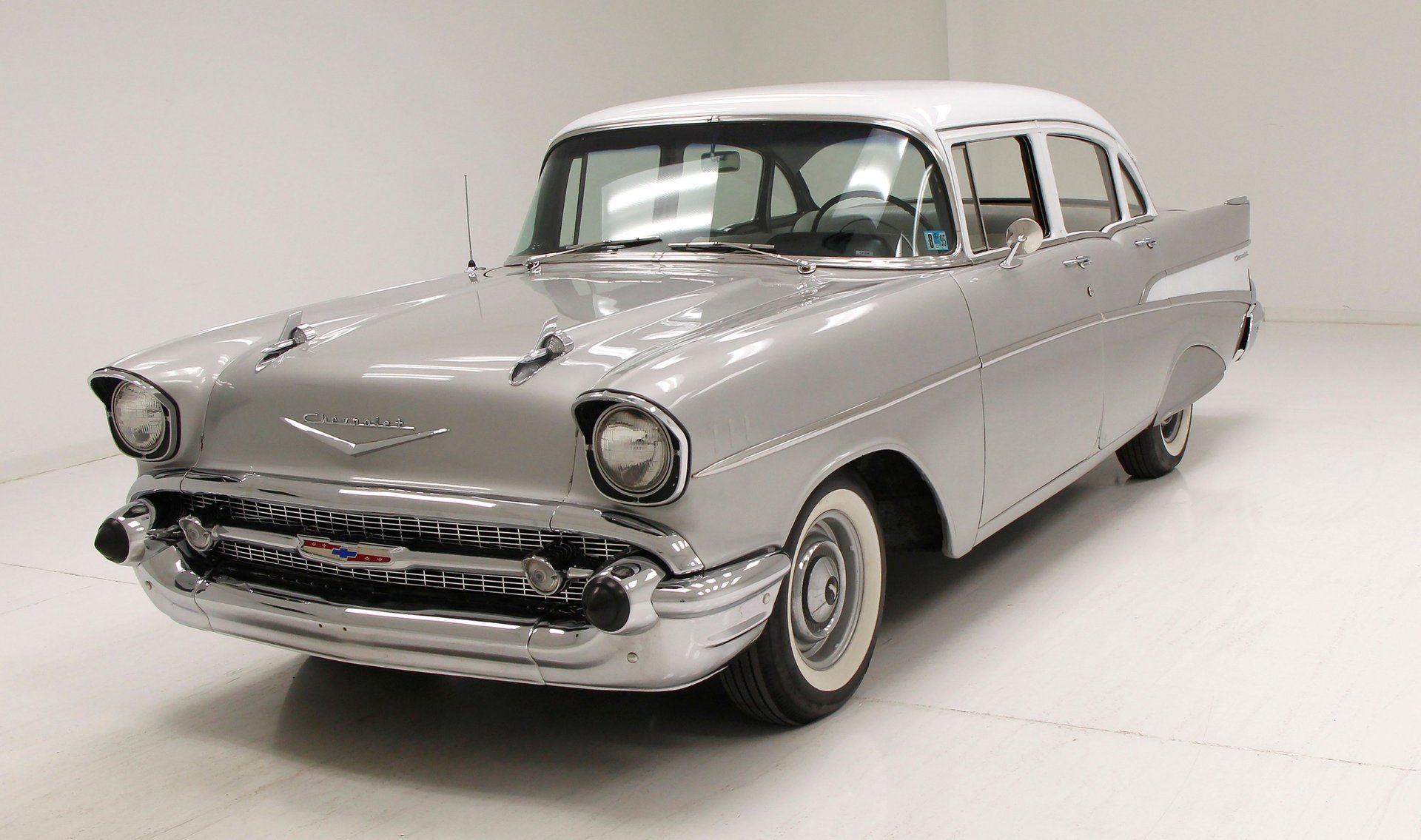 Granted, in most cases it's the Bel Air that receives the lion's share of attention. One might even go so far as to question whether or not Chevy even produced anything other than the Bel Air (and Corvette) in 1957, yet two other models were rolling for the assembly line: the 150, for the economy-minded consumer, and the 210, which bridged the gap between the 150 and the luxurious Bel Air. Today, these are the affordable models that make great alternatives to owning and restoring the more expensive Bel Air.

For consignment a mid-range trim package of the Bel Air in the form of a 210. A clean interior and snappy two tone white over silver paint your chance to get into the Tri Five era on a budget.

Exterior
With Inca Silver bathing the body panels, we note several areas of chipping and rust bubbling. Issues in the front of the car appear to be fit and finish areas rubbing then chipping the paint off. On the doors in particular there is some rust bubbling, and drips into the rocker area coming from the inside of the doors. Particularly on the lower inside of each door the rust is present and active. An Imperial Ivory paint is seen on the top and has some faults as to cracking. Chrome is showing areas of pitting, dimpling and rust. This car sports fender skirts and these appear slightly darker than the body color silver. Trim work is mostly bright and shiny, but attaching screws, and rings for the mirror and wipers have rusted. Also, it appears the rear window seal leaks because water damage can be seen on the inside rear deck. Wide whites are all around and have standard 14-inch wheel covers all around.

Interior
A recovering of the seats now in white vinyl bolsters and silver 50's style pattern cloth inserts, we are in the 1950's. The dash appears to have the original gauges and steering wheel and we can call it patina finish. The door panels are white with silver and show some wear on the handles and a few faults, mostly unremarkable. The wind laces appear off color more into the rose or pink range and has begun to detach from the surrounds of the doors.

Drivetrain
Restored in the early 1990's this orange/red blocked 283ci V8 sports chromed valve covers, and an original oil bath air cleaner. This has a few scratches and areas of paint peel but sits atop a 4-barrel carburetor. A 2-speed Powerglide automatic transmission is noted on back and a 3.36 rear.

Undercarriage
Some surface rust is noted underneath and a few areas of active rust invasion are seen particularly near the driver's side back of front quarter. Body hangers are good as well as rockers. A broken rear leaf spring can be seen. A new fuel tank, sending unit, and recently installed exhaust are also noted underneath.

Drive-Ability
This car started up and exhibited a loud lifter noise until it warmed up. Once it did it ran smoothly, but due to that broken spring in the rear has a creak when you take corners. The steering would wander quickly to the right intermittently. Brakes were solid but sadly a lot of the interior gauges are inoperable, (clock, speedo, radio, heater) and the generator light stays on.

An early 1990's restoration which is in need of some TLC on the paint and body end. The car runs well, and the interior remains nice despite the time that has past since last restored. A few dents and dings, some rust bubbling however a car for someone who wants to spend some time in the restoration area project arena.