Our hours Mon-Tue-Thur-Fri 9am-5pm, Wed 9am-8:pm Sat 9am-Noon. Closed on Sundays. We will be closed Memorial Day May 30th. 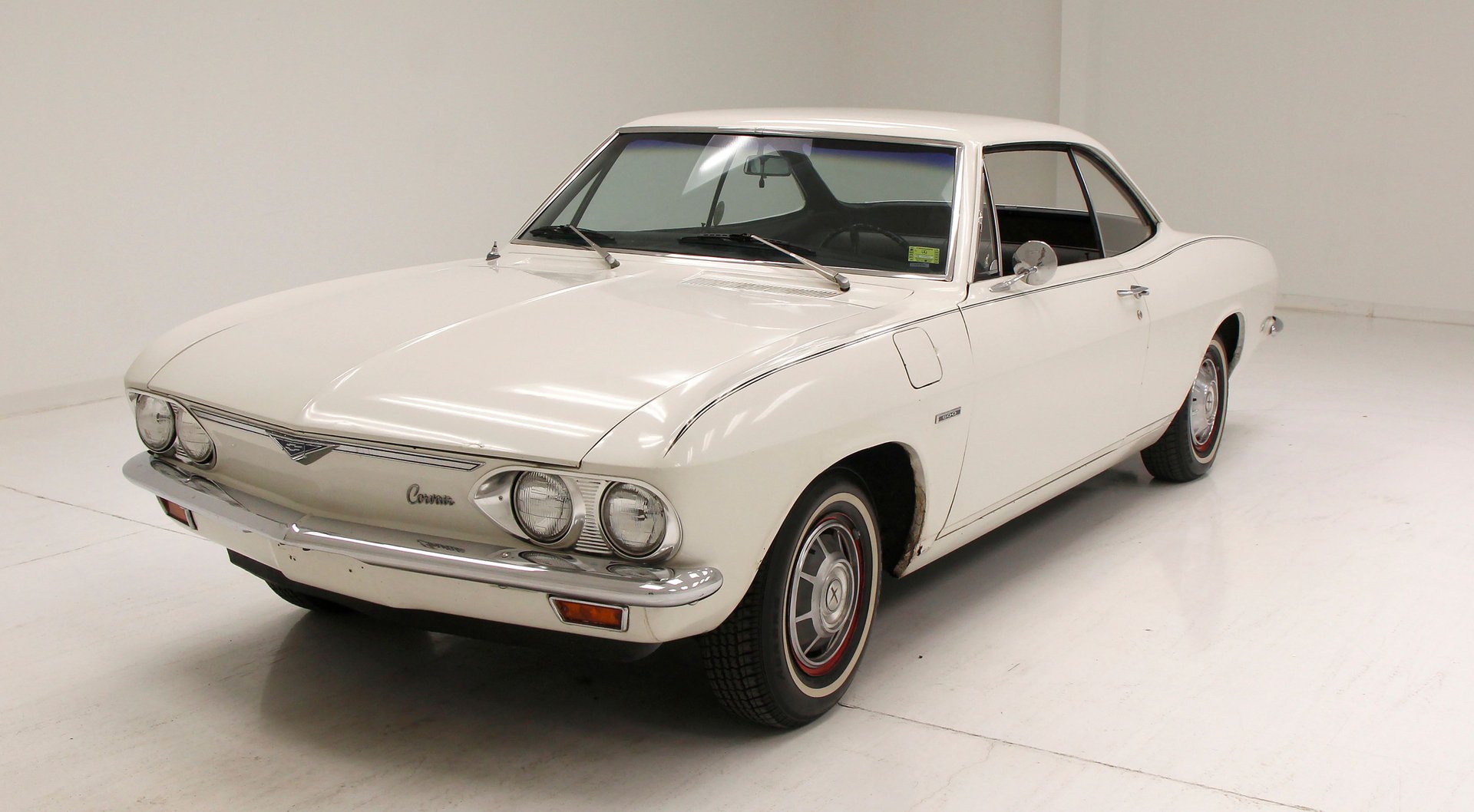 Introduced in 1960, the Corvair shattered Detroit's conventional car mold. It was GM's first unit-body car mass-produced within the US. It beat Corvette to market as the first American postwar car to feature front and rear independent suspensions. And the Corvair became the first mass-produced domestic car to tout a rear-mounted air-cooled engine. That alone was staggering, to say nothing of the fact that it was also a compact car that fit snugly into a rapidly growing market. Conventional wisdom might suggest that such an unconventional car would muster only marginal sales, but such was not the case. In just one season, dealers sold 250,007 Corvairs in three trim levels, which was good for third place behind Falcon and Rambler and well ahead of the other compacts.

For consignment a Corvair from 1967 with a new electronic ignition, a new gas tank and sending unit, new heater hoses and a new alternator. Chevrolet's answer to the European invasion with a rear engine sports car.

Exterior
Bathed in an Ermine White respray, we note several areas of concern on the rust angle. Mainly on the rear quarters before and aft the wheel wells and surrounding the wheel wells there is invasive rust some of has been haphazardly repaired. Also, within the trunk (hood) hinge areas there is some peeling of the metal going on. Body panels remain straight, and chrome and trim are fairly clean and shiny. Glass is all clear all around and standard Corvair wheel covers are all around.

Interior
The non-original interior in black vinyl is still kicking with nicely preserved door panels. The optional front bench has suffered the test of time with now most of it wrapped in black tape to keep the vinyl from losing the foam stuffing. This is particularly evident on the driver's seat, as well as the passenger rear side of the bench in back. Some mold is present on the rear seat, and driver rear side panel, and some damage to the cardboard “deck” behind the rear seat. The original black painted angled down and in dash front has the deep inset round gauges, heating and airflow controls, and the transmission shifter within the dash vertically. It appears the original radio is in however does not function but does crackle when you turn it on. Headliner is nice in a darker gray corduroy and the floors are flooded with black carpet which is in good condition. A note to the front trunk area there is some rust noted most likely from a leaky master cylinder which is tucked against the firewall and also shows a rust covered reservoir.

Undercarriage
Some surface rust with an area of concern on the drivers rear tub to the trunk where invasive rust is creating a crack in the metal. Floorpans were repaired, and in the edges of the repairs we note some re-cracking. The lower engine cover is nice and shiny black just like the topside which leads me to believe this engine may have been restored at one point as it is cleaner than the other characteristics of this car. Drum brakes are on all 4's.

Drive-Ability
After a sputtery warmup period this car did run and idle smooth. It accelerated effortlessly and shifted smoothly. A few creaks in the sharp turns but is has a nice low ride. I found the heater to be inoperable, and the radio crackled but did not tune any stations in.

A classic that is in need of a loving home to give it some TLC body and interior wise. Mechanically strong, this ubiquitous Corvair is here for the looking and taking in the halls of Classic Auto Mall. Who cares about Ralph Nader!