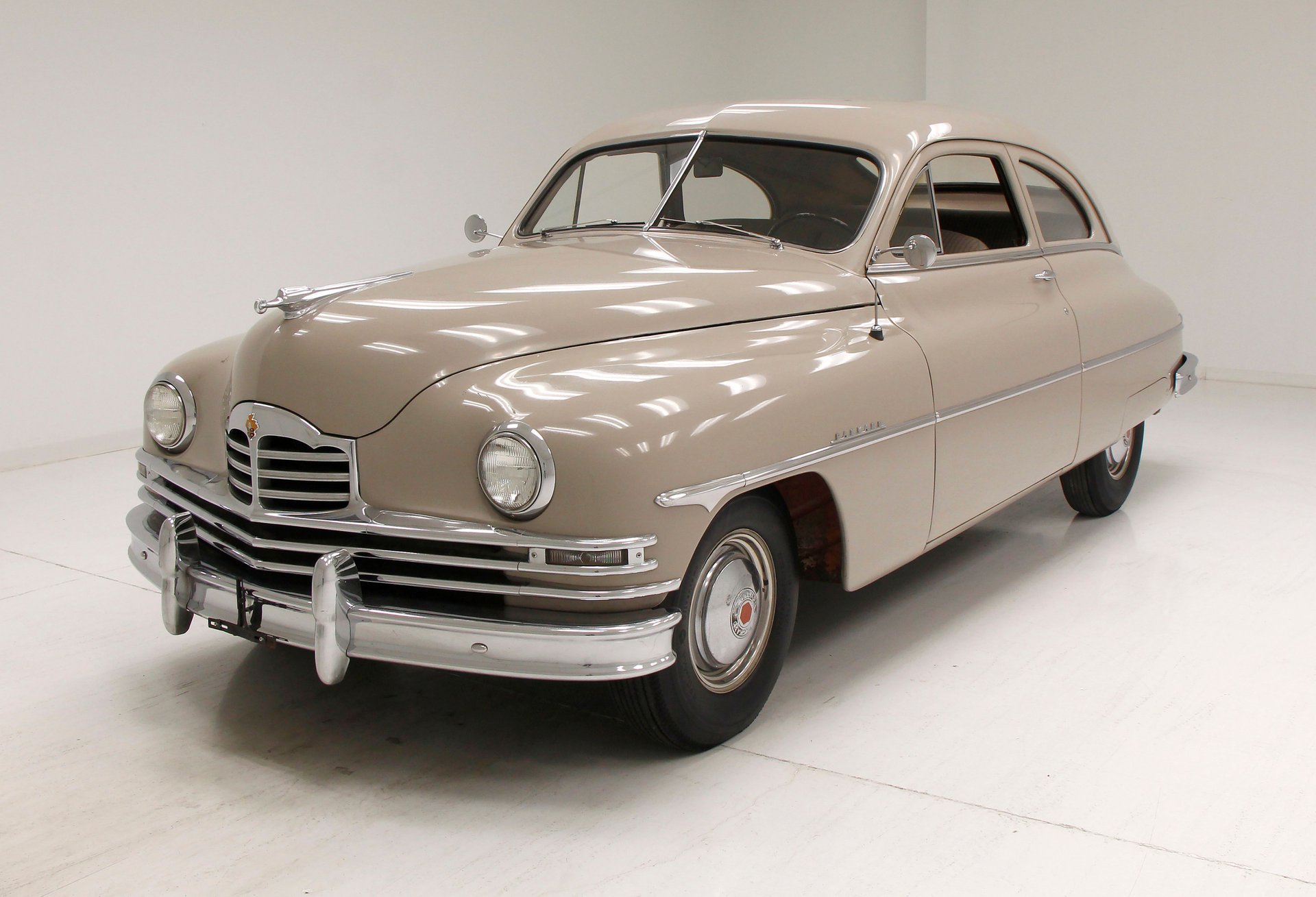 In 1949, (and still in Oregon and New Jersey today) gas stations pumped gas for their customers, and there was a skill in not overfilling the tank. Packard had to be a favorite for gas station attendants. As a Packard gas tank was being filled, there was a whistling sound. When the tank was full, the whistling stopped and there was no overfill. Now the pump does this for you.

For consignment a torpedo back pontoon fender styled Packard 23 which was lovingly referred to as a "bathtub" type. While this was considered futuristic during the war the 1948–1950 Packard styling was polarizing. To some it was sleek and blended classic with modern; others nicknamed it the "pregnant elephant". Test driver for Modern Mechanix, Tom McCahill, referred to the newly designed Packard as "a goat" and "a dowager in a Queen Mary hat”. This consigner stated 12,528 mile car with just two owners, has its original paint, and interior.

Exterior
Original tan bathes the exterior of this car. It has a few areas of crazing, and surface rust under the paint, as well as some scratches and just chip off. Plenty of chrome trim adorns this tan bubble and is in mostly good condition excepting a few areas on the handles and rear view mirror that have a light misting of dimpling. All glass is clear, and dish style wheel covers are shiny and clean.

Interior
On the doors, very nice fuzzy broadcloth mixes with lower vinyl panels, with in tan. A slight bit of chrome edging and chrome handles have bakelite bezels. The top rails of the doors are adorned with faux wood grained metal. Seating is tan and cream striped broadcloth, and the front split back bench and rear bench with arms sit in brown vinyl covered tubs, which float on rubber flooring upfront, and tan carpet on the rear. The faux wood grained metal continues on the dash front and dash top which has a chromed bezeled instrument cluster, and massive central horizontal chromed grid radio speaker cover and radio. All lighting controls and heat controls are pushbuttons, lined up at the bottom of this grid. Instruments are a beautiful metallic champagne with 3-dimensional off-white art deco styled numbers and pointers. A tight mohair headliner in gray is seen above.

Drivetrain
An inline 288.6ci 8-cylinder engine is in an original engine bay. Surface rust abounds on the block and head, but new spark plug wiring can be noted. A Carter downdraft 2-barrel carburetor feeds the fossils, and a 3-speed manual transmission with a 3.90 gear back end completes the drivetrain.

Undercarriage
An array of varying degrees of surface rust is seen all over the undercarriage. None of this though appears to be impeding the structural integrity of this car, even on the rockers. It is more a visual annoyance than anything else. Drum brakes are all around.

Drive-Ability
A great running and driving example that starts right away and performs as it should. These Packard's are reliable and mechanically sound. A new fuel pump was just added for additional ease of starting.

A 2-owner car the consigner only owning the car for the past 2 years, and the first owner owning it since 1949 when it was purchased new. Very clean interior, decent paint, and an interesting design line will lead you to “ask a man who owns one”, when referring to the Packard.