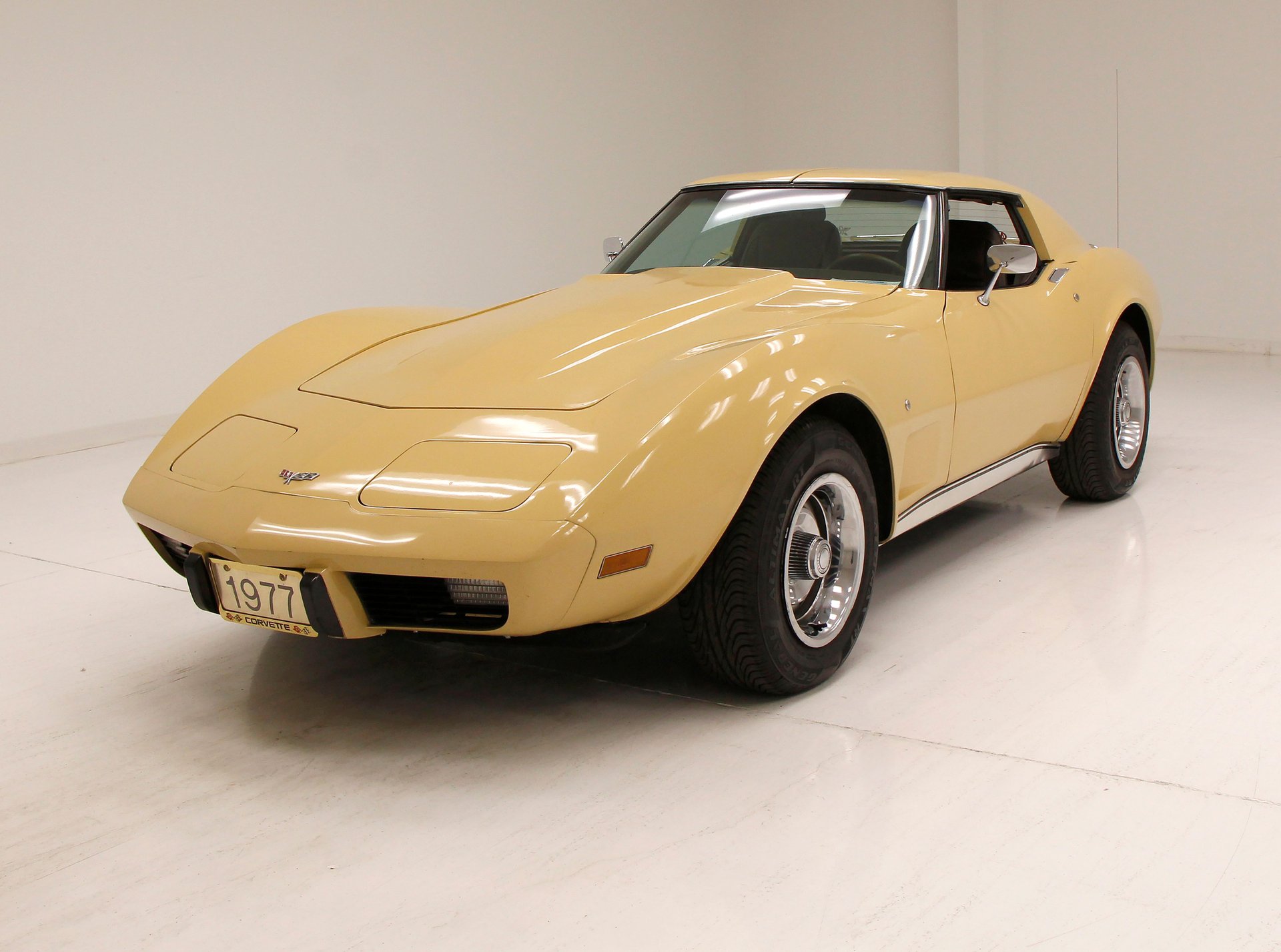 The 1977 Corvette was no longer badged with the "Sting Ray" script. The tried and true orange engine color was changed to blue between August and September of 1976. Some early production 1977 Corvettes were still built with the orange painted engines, but most have the new blue engines. A new crossed flags badge adorned the front of the hood between the headlights as well as on the fuel filler door. The glass roof panels that were announced this year were never delivered on a production car. The 500,000th Corvette rolled off the line this year.

For consignment, a C3 version from 1977 and later in the year build as the engine color went from standard orange to the new blue, and this one is blue. Overall fair condition on the exterior, a favorite design version of this writer with all rounded edges and a beautiful profile and stance.

Exterior
Bathed in Corvette Tan Buckskin there are several areas on the surface of this car that show cracking and crazing of the paint. On the passenger's side just behind the front wheel well is an area that has been resprayed, but it is off color. Another area near the antenna appears as there was a hole in the fiberglass, and it had a previous repair. Gaps are inconsistent, and chrome is dimpled. A chromed luggage rack has been installed on the rear deck. Coves just behind the front wheels flare into the fender nicely and move upward to form the curved fender that melts into the hood area, which also houses the hidden headlights. Bringing up the rear are the round taillights in a body matching curved bumper. 15-inch Chevrolet rally wheels are all around.

Interior
Peering through the removable “t” top we see original brown leather covering the high back buckets which are in nice condition. These are fronted by an angled dash that has a center console extension which houses several gauges in the center just above the shift lever. An AM/FM/8 track player(inoperable) is inserted here as well. Deeply embedded circular gauges are in front of the driver as well as the original steering wheel. Brown carpet covers the floors and is in generally good condition with some fading to a gold color in the back storage compartment. On the passenger's side no glovebox but dual storage pouches are conveniently located in the dash. Some options include factory air conditioning, power steering, power brakes, power windows, cruise control and anti-theft alarm.

Drivetrain
A numbers matching 350ci V8 with a single 4-barrel carburetor and a TH350 3-speed automatic transmission, make up the drivetrain. Noted for a little extra horsepower is a tornado unit with a performance K & N air filter.

Undercarriage
All nice and clean underneath with good sound structural frame and floorpans. Brand new mufflers and a cross over exhaust pipe are installed. C3 Corvette suspension all around as are power disc brakes.

Drive-Ability
This car starts quickly and runs very nicely. It is a nice comfortable interior you slip into and with a flick of the shifter, we are off and running. Nice handling, and good acceleration and overall power. It was a nice day and we took the roof panels out and enjoyed the airflow. Everything except the 8-track player was working just fine.

With its lovely lines, “T” top, and blue block engine topped with the tornado unit, this car is a good driver. Paint condition prevents it from being a really nice car, however, certainly is not a deal breaker. A turn key and have fun Vette from 1977 which was a very good year.