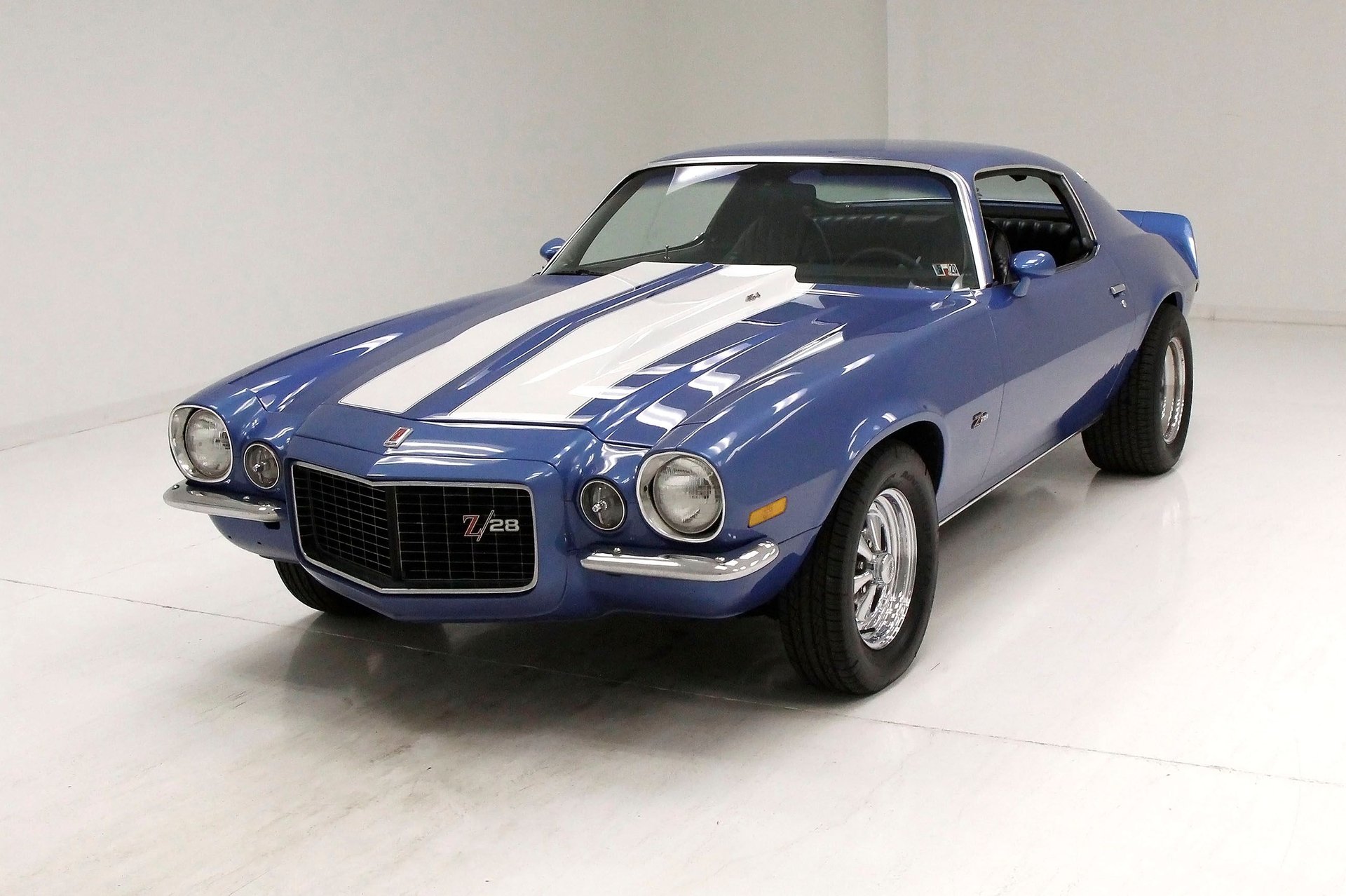 Chevrolet introduced the Camaro on June 28th, 1966, began making them in August, and by September, the first cars were delivered to the public. Ever since then, every Camaro ever built has had a singular goal: beat the Mustang. It's the most intense and enduring automotive rivalry in America, and arguably the world.

Born originally a mild-mannered Camaro Coupe, we now have a Z/28 badged car, mostly correct on the exterior for 1973, with a monster under the hood, and original interior. With a consigner stated mere 3,000 miles on the engine (specs available), all I can say is rod and roll!

Exterior
With all its steel panels bathed in blue with actual painted on white stripes, rear spoiler, and snazzy 15-inch Chromed Cragar SS wheels, let's go racin'. As we carefully navigate our way through the exterior, we see areas of invasive rust, and additional areas of bubbling in the paint that has rust underneath causing it to bubble. This is above the rockers especially on the rear quarters right behind the doors. Some surface rust can be seen in the floor of the trunk as well, where the trunk coating has peeled off. Chrome looks good, as well as the scooped 454 badged hood, and all glass is nicely preserved.

Interior
Original black vinyl shows nicely, with the tuck and roll buckets up front, and a bench in the rear. Slightly faded black carpet covers the floors, and the headliner as slight areas of minimal sag areas. The dash is also original and has wood appliqué around the gauge cluster. An AM/FM/CD radio has been added, as well as 3 aftermarket gauges in front of the shifter which is a Hurst brand.

Drivetrain
Replacing the original 307ci V8 is a much larger 454ci V8 that has been bored out to 462. A single 4-barrel Holley carb mixes the fossils and air and throws them down to an Edelbrock Performer RPM intake manifold. A 5-speed manual Tremec 3550 transmission is attached to the back of the mill. A 10-bolt 3.42 rear is present. All is well under the hood.

Undercarriage
Despite its exterior foibles, the underside is mostly rust free save for some minor surface rust. Frame is very sturdy, pans are clean, and rockers are showing no rust whatsoever. Independent coil spring front suspension, and leaf spring with ladder bars are on the rear. Power disc brakes upfront and power drums on the rear. No real notable problems underneath.

Drive-Ability
This mill lit right up, sounded great, and had no problem taking off. The car cruised nicely, and was decent in the turns, although I feel it would be happier in a straight line. A street or strip car that has a comfortable interior. Noted is the heater is inop, as it has been disconnected under the hood.

A good example of the 1973 Camaro version, now labeled Z/28. Nice job on the mill, original interior, and blue with painted stripes, time to spin those Cragars. Once the rust is addressed, this car will be really up into the next level, however right now it is a turn the key car.

Offered at $29,900
view inventory
Thank you for your interest! We'll get back to you soon!
Speed Digital