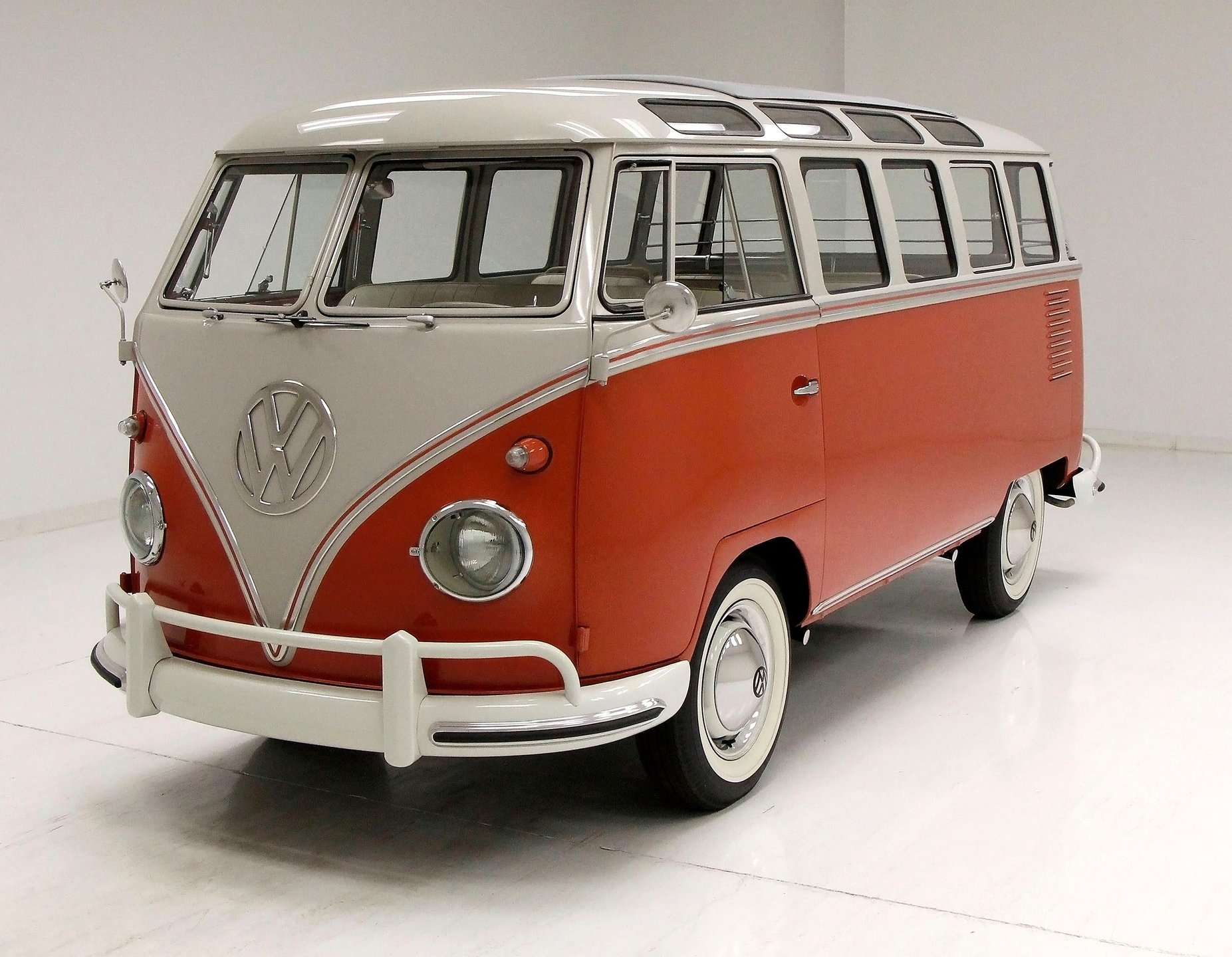 The origins of the Type 2 are credited to Ben Pon, the Dutch VW importer, who in 1946 had visited the Wolfsburg factory with a view to importing Beetles (or KDF Wagens as they were then) to the Netherlands. However, on his trip he saw something that interested him more. What he had seen was a homemade parts mover based on a Beetle chassis, but with the driver and controls sat atop the engine, with a large flat load bed in front of them, this little vehicle was called the Plattenwagen. Pon made a quick sketch and returned to Holland. Ben Pon returned to Wolfsburg in 1947 with some more detailed sketches of his new concept, and a few criteria it had to meet. Namely; it had to be able to carry a load of 1500kg, and that the driver and controls should be mounted at the front of the vehicle. Development began on the project in 1948, and 3 short months later the first prototype had been made. After initial testing it became apparent that the modified T1 chassis wasn't going to be sufficient for the job, so a ladder chassis with a separate body was employed.

VW Importer, dealer and designer Ben Pon's vision was for a version of the Microbus which was adorned all around with windows and skylights. These, along with a large folding sunroof if you will, was to be used mainly for tourists wanting to trek into the Alps and do some sightseeing. With its rear engine it could literally go through anything, and it took on many uses. For consignment a “splitty” if you will with 23, yes count 'em 23 windows in the form of a sightseer complete with Safari fold out front windows for good air circulation, and in immaculate condition, we give you the Samba Microbus.

Exterior
Donning its original deluxe belt line trim running from its front V to the rear, and skirting Sealing Wax Red with Beige accenting, this fully resorted Microbus is as good as it gets on the restoration rebuild. With Safari correct period style windows that fold out and look downward on the slightly curved but steep front end that sports the large VW badge and simple single headlights, it's all very shiny and dimple free. The 23 windows are all sealed tightly and are in very nice condition. Original date coded 15 inch wheels with original and very hard to find Lemmerz trim rings and the iconic VW dog dish style wheel covers we are touring in style..Cha Cha Cha..

Interior
Much of the original equipment has been retained such as the correct and rare 6V ambulance fans, interior grab handles and jail bars. This is all wrapped in showroom white inserts with white piping and gray bolsters. A “humpback” front seat and 2 additional bench rows are on the back, as well as the second row looking upon the spare tire case wrapped in door panel matching gray uppers and striped lower broadcloth. Floors have rubber mats over them, and if you want a detail treat, lift them up and you will be met with Sealing Wax Red metal, which is immaculate. The dash, also in Sealing Wax Red has the original gauges, clean white Wolfsburg castle badged steering wheel no cracks or even marks on it, and a passenger side clock. A full cloth interior and canvas exterior retractable sunroof is fully operational and floats forward and rearward to let the sun shine in. This is the dawning of the age of Aquarius! Perhaps a Tango my dear?

Drivetrain
A 1200 CC 4-cylinder engine fully rebuilt but not original to this bus (Original engine was replaced early on by the first owner) has a 1-barrel carburetor on top and a 4-speed manual transmission. A 4.125 rear is noted. Do the hustle!

Undercarriage
A quality restoration as such which consigner states he was adamant about not making it too perfect, but much like original theme carries through to the undercarriage, where we see beautiful black panels, a sturdy frame, clean bolts, and all fully functional. Noted are the hard to find black steel inserts that protect the corners of the rear bumpers from too much splash back from the rear wheels. 4-wheel drum brakes, Transverse torsion bars up front and rear swing arm suspensions can be seen in clean form. Pasodoble possibly?

Drive-Ability
My master decoder and myself were treated to a consigner drive that gave a little history of ownership, worked all the functions, and drove smoothly along not missing one drop of the sunshine and fluffy cumulonimbus clouds which floated by through our 23 windows. As we listened to the tinny whirr of the motor in the rear, and smooth shifting through the gears, all was right with the world on this day with this beautiful meticulously restored to original Microbus. Shall we dip now?

Back in the early 1960's these buses were everywhere, shuttling tourists into the Alps, and to and from airports. Now they have become extremely collectible, and very good investments. This little nest egg is really nicely done, runs perfectly, and has been well cared for. It has many rare original parts still working, and a wonderful history. A fine ballet of delicate parts and mechanicals dancing together to push you down the highway, flower power man.